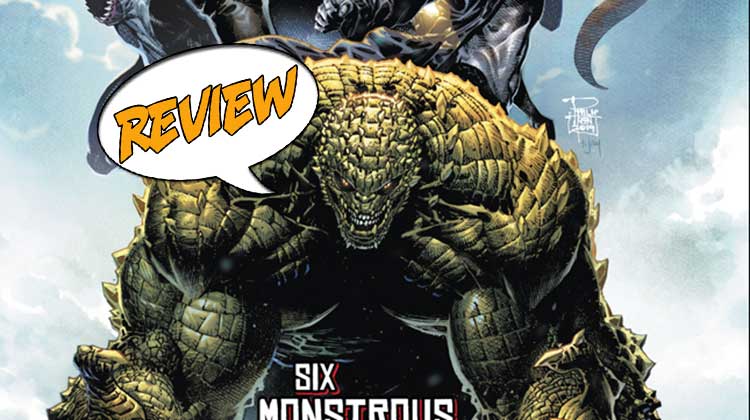 S.H.A.D.E. is no more and Frankenstein is striking out to take care of some unfinished business. He is in Gotham’s Monster Town to eliminate his mentor, Melmoth, but it seems like he may need some backup. Find out more in GOTHAM CITY MONSTERS #1 from DC Comics! Previously in GOTHAM CITY MONSTERS: After the “Night of the Monster Men” a few years ago, a section of Gotham City was turned into Monster Town. Despite the fact that monsters and mutants essentially have free reign over the district, it has been relatively quiet, until now. Since entity known as Leviathan has taken out all of the secret, and not so secret, organizations in the DCU, the rules have changed. Now on his own again, the ex-S.H.A.D.E. agent known as Frankenstein is out to close the door on a particularly ugly part of his past. It looks like the trail leads to Monster Town.

EVEN A MONSTER WHO IS CORRUPT AT HEART…

Monster Town, or Monstertown if you prefer, was born on the corpse of a giant monster unleashed by Professor Hugo Strange. It defied the odds to become a viable part of the Gotham City landscape, even if one where few dared to tread. Those that do, for the most part, know what they are getting into. So finding Andrew Bennett, aka I…VAMPIRE, battling the forces of the Mad Monk Niccolai Tepes under the city should be no surprise. Bennett is continuing his battle against the evil vampires and find clues that there is a new player in town, a player who may be tipping the scales toward a bloody red future. Elsewhere in the city, others are looking for a new direction. Killer Croc is finding that life after the Suicide Squad is not an easy thing. Frankenstein is stamping out evil in whatever dive it hides. Orca is meeting out cold, wet justice to the pirates and the poachers. Lady Clayface is trying to find herself by experiencing as much as she can. The die has been cast, and soon these monsters of Gotham City will be called together to face a dark evil proclaiming itself ruler of all. Can they gather together to fight it, or will their own focuses be their downfall?

CHILDREN OF THE FIGHT, WHAT BLOODY CARNAGE…

The whole idea of Monster Town and the way it has been largely ignored by most DC titles has always been something which bothered me. It looks like it may have been bothering DC as well, because now Steve Orlando (Justice League of America, Supergirl) has taken a hand in addressing it, and addressing it big. Thanks to Bendis and his Event Leviathan, the various organizations which gathered and policed the various parts of the DC Universe have been dismantled. This leaves a lot of ground to be covered, and a lot of formerly directed agents out there suddenly in the breeze. Many of the “monsters” which appear in this title have a connection with S.H.A.D.E. or one of the other dark op groups, so utilizing them for a title like this makes sense. Orlando has gone back and done his research, as we are seeing him pull on strings from Morrison’s Seven Soldiers of Victory series and various other horror related titles to form, in my opinion, the best use of Monster Town since it was introduced. His characters ring true to their known versions, and the overall plot seems to be deep and more than just another attempt at gathering like characters into a title. But, that is a problem, because at this point it is gathering like characters into a title. By using only monsters, it immediately falls in danger of becoming one of those gimmicks to stake a claim. However, Orlando has the skills necessary to pull it off and make it sing. He is pulling in items from each characters past and giving them a reason to join together. Whether it meshes into a great story… it’s a little early to tell. This issue is entertaining and sets up some nice possibilities, so we will have to see.

Artist Amancay Nahuelpan (Clandestino, BOY-1) is coming off some great work with various DC anthology titles, and here he shows why he needs to be a regular contributor to the company. He has some great pages here, such as the first page of Andrew Bennett fighting the forces of the Mad Monk, and achieves a sense of continuity with the blending of Monster Town’s more horrific elements with the real world it inhabits. His work is consistent and has a nice flow on the page, guiding your eyes to make for a fun read. He and Orlando achieve some great beats here, and I look forward to more of his work.

BOTTOM LINE: SOLID AS A STAKE

This title could have so easily come off as a train wreck from the start. The idea is gimmicky, but Steve Orlando is the person to make it reach beyond that gimmicky status. He and Nahuelpan turn what could have been a throw away title into something I am looking forward to.

An imaginative story with a gonzo cast make this a title that I’m planning on picking up for now. It strikes the right chords and leaves the easy parody behind.

Gotham City Monsters rises above the status of sales grab to be a solid and engaging issue.