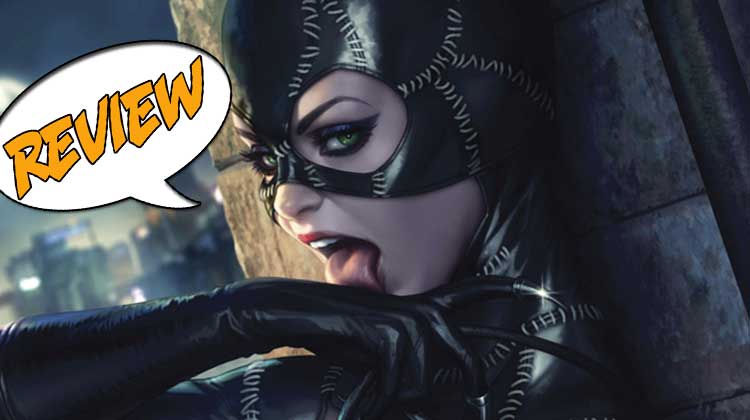 Selina Kyle has upset the balance in Villa Hermosa, and the existing crime families put a price on her head. Can she squeeze her way out of this one? Find out in our review of Catwoman #15 from DC Comics! Previously in Catwoman: Selina Kyle is in Villa Hermosa, shaking up the order of all things crime. One rainy day, a woman named Karen Rain arranges to meet her. The police have a file of financial information for all the crime families in town; Karen wants it, and for enough money to get out of town, she’s willing to share the information. She’s not the only one who wants it. On the night the files are being moved, the Russians make a grab for it. But Catwoman is in the thick of things, plants a decoy, absconds with the papers, and gets shot in the back.

Catwoman #15 opens after her rescue by the Gentleman Ghost as she patches herself up a bit more and figures out that whoever came after her must have tracked her through the city’s surveillance cameras. It’s short work for her to backtrack them, and she finds her way to the lair of Lock-Up. He is there, and he mocks her for following a trail he deliberately set up for her, because this lair is actually an elaborate trap involving a locked, metal-walled room and some grenades.

But Catwoman is no slouch, and she survives and scrambles her way out, just as we hear Lock-Up telling his henchmen to let their bosses know she’s not a problem anymore. One of them wonders if they’re going to want truth, and Lock-Up makes a Schrödinger’s Cat joke, which is a cute touch. It’s the perfect cue for Selina, a little more tattered around the edges, to incapacitate him and force a little information out of him.

Across town, a very fancy dinner party has just begun, and by very fancy, I mean not only did it cost millions to attend, but one of their courses is Roasted Ortolan Songbird, which is a real thing, by the way, and just awful enough to be a terrific choice for the crime families. (The little birds are killed by being drowned in Armagnac, and are eaten in their entirety, bones and all.) Apparently, the money collected from this dinner went to hire the people after Catwoman. Black market specialties at the dinner table are a little bonus.

With impeccable timing, Selina arrives. She’s faced down in the hallway by guards headed up by a woman with a cybernetic arm with a built-in blade. It’s a terrific battle, and as it goes on and edges closer to the dining room, the diners start hearing it. Then the doors burst open and Selina stalks into make her claim, bringing with her the cybernetic arm. Oh, yes – just the arm.  She announces that she is the new top of the heap. She has the goods on them; they can continue to operate at her whim. And afterward she has a nice little rooftop monologue about how cats are territorial, among other things.

But that isn’t the end of the story. There are other loose ends that have not yet been tied up, and they are tied up for us very neatly indeed. She finds Ms. Rain, the woman who hired her. Ms. Rain sees her approaching and shoots. And it turns out that Ms. Rain isn’t who she said she was either. It is a lovely and satisfying ending.

For the most part, I like the art of Catwoman #15. The action is clear and exciting, and it really looks like Selina is pushing herself through this one. Her expressions are lovely and her cat ears, when she’s in costume, communicate every bit as much of what she’s feeling as a real cat’s ears do. It’s a nice touch that makes her that little bit uncanny yet still feels familiar.

If there’s anything about the art that I don’t like, it’s a couple continuity errors that were just obvious enough to kick me out of the story momentarily. At the open, she is winding bandages around her torso and up over her shoulder, over her sports bra. Two panels later, the shoulder wrap is clearly under her sports bra. Obviously, they didn’t want to show her topless, but it’s inconsistent. Then there’s the Orotolan Songbird scene. Everyone is served one, but people’s plates are mysteriously empty. The hostess’ plate completely disappears and reappears. That’s such a lovely moment of villainous excess otherwise; it’s a pity for the distraction.

I really like the portrayal of Selina Kyle in Catwoman #15. She’s capricious, she’s good at what she does, and underneath it all, she is good at heart. She tough and, like a cat, is both likeable and rather terrifying.

Staking her claim in Villa Hermosa, Catwoman strikes with her claws bared!