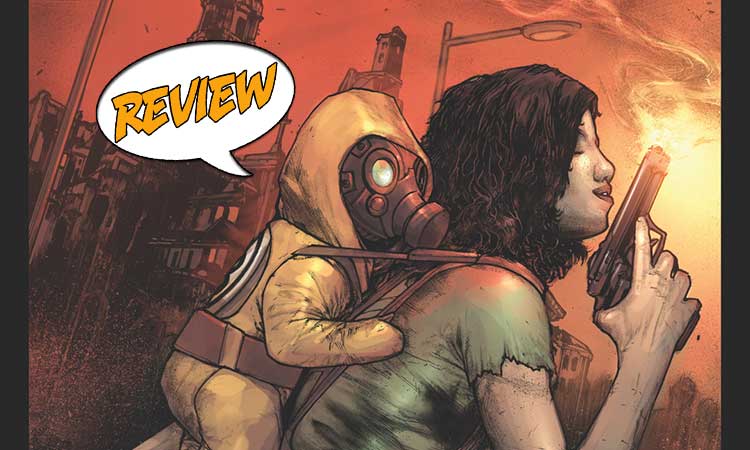 Outbreaks of fatal diseases on the US-Mexican border appear to be mysteriously targeting only Mexicans.  Similar outbreaks around the world kill particular ethnic groups, but not others living amongst them.  It seems impossible, but is someone engineering bio-weapons to kill specific minority ethnic groups?  Find out in your Major Spoilers review of Pandemica #1 from IDW Publishing! Previously in Pandemica:  Around the globe, diseases that ordinarily don’t discriminate have begun doing just that, killing particular minorities by the thousands.  When Doctor Katz goes on television to announce his belief that a conspiracy is in play, he immediately becomes a target.  Now, with the aid of bodyguard De’Neesa, can he and his team uncover the truth before they too become target?

JUST BECAUSE YOU’RE PARANOID DOESN’T MEAN THEY AREN’T AFTER YOU.

Some might view Pandemica #1 as almost irresponsible, but only if you were unable to separate fact from fiction.  Sure, there are people out there who no doubt believe shady conspiracies are developing bio-weapons to target particular ethnic groups.  However, whether anyone is or not best belongs in the realms of fiction, as the reality of it would be too terrible to comprehend.

In writer Jonathan Maberry’s hands, Pandemica #1 isn’t afraid to pick up the idea and run with it.  Maberry (V-Wars) is determined to strip mine the idea to its logical conclusion.  In a world filling with authoritarian nationalist leaders where refugees number in the tens of millions, the logical endpoint is ethnic genocide.

Pandemica #1 feels frighteningly plausible, whether the science is true or not.  The growing death toll, the body bags, corpses tossed onto a  growing pyre, scotch-swilling bloated plutocrats watching on with quiet satisfaction.  The writing is good enough to make the reader half believe something like this is possible, and adds to the sense of unease threaded through the issue.

But does it make for a good story?

Pandemica #1 is packed with incident, from the infiltration of a Texas Detention centre, to an attempted kidnapping off the street; the issue is certainly full of action.

It does sag slightly in the middle, with the introduction of wealthy scientist Doctor Katz on a cable news show.  There, he outlines his theory and announces his determination to form a team of scientists, analysts and Special Forces operatives and track down the source of what he calls targeted infections sweeping the globe.  This section does drag down Pandemica #1s early momentum, but events quickly pick up as he is run off the road in extremely suspicious circumstances.

I certainly enjoyed Alex Sanchez’s artwork, which combined an organic feel with a determination to draw as many straight lines as possible when depicting building and vehicles.  Some of the art early in Pandemica #1 felt a little ‘stagey’, but once the action began heating p, he brought to vivid life the fight scenes towards the end of the issue.

Maberry’s characterisation is spot on, whether it is Katz’s righteous anger, or his new bodyguard, De’Nessa’s cynicism, to the cold sociopathy of an assassin named Loverboy.  Each has a sense of history that demonstrates they aren’t mere cardboard cutouts.  Maberry, with his extensive history of writing for both comics and novels, specialises in creating well-rounded characters.

Maberry is carving himself a niche in comic book apocalypses, first with Road of the Dead, and now with Pandemica.  Road of the Dead, despite the staleness of the zombie trope, feels a little fresher and more exciting than Pandemica.  Pandemica relies on something that feels like there are individuals out there who would be supporting something like what the issue proposes, while the way out there science and gut punching action of Road of the Dead feels more like entertainment, than horribly plausible fact.  Both, though, are marked by strong ideas and good characterisation.  It will be interesting to see where Maberry goes next with his comic writing, as he brings a fresh, experienced voice to the end of the world in comics’ genre.

BOTTOM LINE: COULD THIS HAPPEN?

Pandemica #1 feels like it could happen, no matter how preposterous it may seem.  It says a lot about the fevered world we live in today that the idea of this type of genocide isn’t implausible.  It’s that sensation that gives the issue its uneasy atmosphere.  While some of the issue feels a little stilted, especially early, it soon loosens up and with the application of some entertaining action, breaks into confident stride by the last page, which promises a much darker future for its protagonists.

Pandemica #1 will have you looking uneasily over your shoulder, and scanning the media obsessively for signs of the coming racially inspired Armageddon.