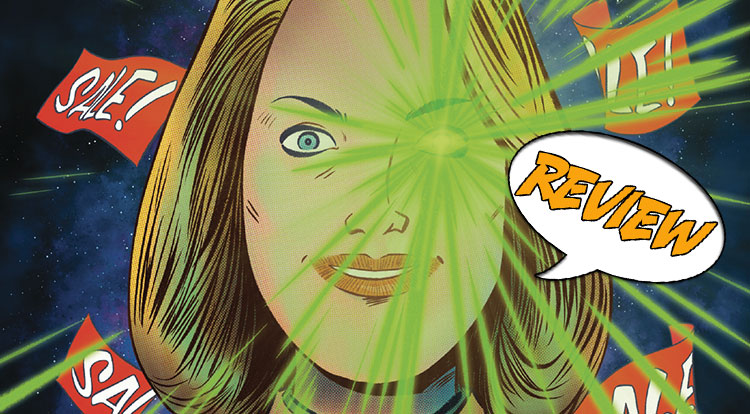 Welcome to Grand Opening day of the new store called “Everything.” They have everything you could possibly want – it’s just what we all need, right? Find out for sure in Everything #1 from Dark Horse Comics. SOLICITATION: In Holland, Michigan in 1980, the town celebrates the opening of a new kind of store. Will this bring jobs to town and let it preserve its traditions? Or is there more to it than that?

BEHIND A VENEER OF NORMALCY

Right from the cover, you know that Everything #1 is going to get into some commentary on our consumer society. But when you open it up and see a security guard spattered in blood and apparently giving someone CPR, you know right way it’s way more than that.  As a starting point, it’s a little confusing but that also adds to the disquieting feeling you get in reading this.

The CPR opening is a page, and then we cut to the bucolic Midwest of Holland, Michigan in October of 1980. This was not a good time financially, especially in Michigan. Then we get our first look at a few characters. There’s a woman who drinks her breakfast of a raw egg and vodka. A well-dressed man finishes his breakfast and finds a bunch of ants on his counter. A father prepares to manhandle his son to school when he finds out the boy has a job interview. And an old man on a park bench grumbles that the air is on fire.

In the site of an old factory, the Everything store is set to open and it’s a big deal – there’s a ceremony, and the high school band, and everything. The city manager makes a speech until he’s interrupted by the store manager who lets the crowds inside and we get our first peek. Inside it looks more like a mall than a single store – little store fronts for everything, and lots of people all looking vaguely happy.

It turns out that the woman who was drinking her breakfast is a loan officer (Lori) who has grown cynical. She also looks like the security guard we saw at the open. The kid we saw earlier, Remo, is applying to work at Everything and gets hired. Later that evening, Lori heads to a bar after work. Someone from Everything tries to hit on her, and she turns him away. She drives home, right past Everything, and stops. She hears music, and something happens to her, almost like a seizure. And that’s not the only weird thing.

NOT YOUR AVERAGE BIG BOX STORE

Everything #1 blends an almost boring normalcy with odd, even surreal moments, and the art sells those. The book gets more disquieting as we read through it, and there are details that I only caught on a second time through. I like the feeling that we don’t quite understand what’s happening, but it feels like whatever it is, it could almost really happen. That gives it a creepy flavor.

There’s a musical theme that runs through as well. It’s just notes that run up and down, and they show up at different times, usually when something dramatic is happening. If you pay attention, the way they’re drawn changes flavor too, like it has a life of its own.

I like the juxtaposition of something akin to a mall/big box store against a backdrop of just a little creepiness. In the setting of an out-of-business factory, it makes me wonder – is this the wave of our economic future, and is it as benign as it looks in the commercials?

There’s a lot going on in Everything #1, and we’ve just scratched the surface. The book has some momentum, as though all the different threads that have been started are already intertwined and are being pulled deeper into whatever is going on. It’s not a bad way to kick things off, although there are moments that still feel a little confusing.

Is consumerism the future of the 1980’s and where will it lead?