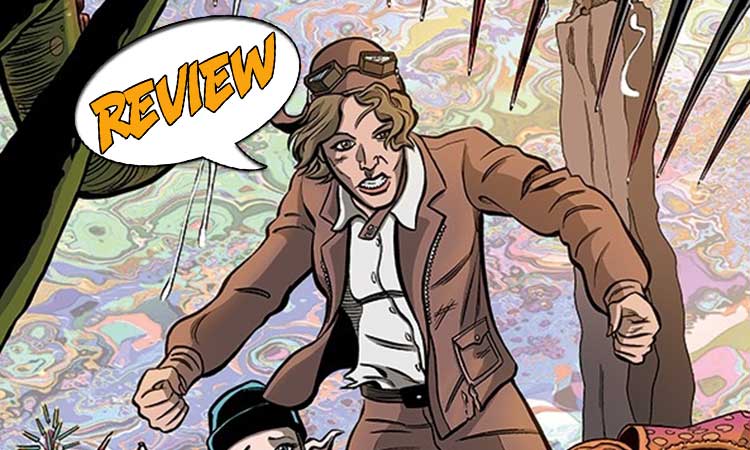 Lovecraft and Sonia become infected by a monstrosity while Houdini is pursued by beautiful redheads. Intrigued? Check out Herald: Lovecraft and Tesla: Bundles of Joy #1! Previously in Herald: Lovecraft and Tesla: Intrigue and supernatural adventure abound as H. P. Lovecraft and Nikola Tesla face off with Cthulhu cultists and rub elbows with other famous historical figures of the early 20th Century.

ALL IN A DAY’S WORK FOR INVESTIGATORS OF THE OTHERWORLDLY

I’ve had some interest in H. P. Lovecraft for quite some time and am intrigued by how his popularity has been gradually increasing over the years. In Herald: Lovecraft and Tesla: Bundles of Joy #1 it’s clear that as a character, he’s been granted a more adventurous life than he really led. But when you consider the other characters that are in play, it’s easy to understand why. Honestly, there’s also something to be said for a horror story to be set in the early 20th century, especially one of a Lovecraftian style, with horrors that most people aren’t even aware of. That would not work in our day and age where everyone has cell phones with cameras on them.

We open on a scene in the attic in a house in Providence where Lovecraft’s mother is looking at stuff in a box. Then we flash to New York where an auburn-haired woman who smokes (and swears) buys tickets to Houdini’s show that evening. Then it’s off to The Elsewhere and Amelia Earhart traveling, on foot, when she briefly sees a rift that opens onto Earth – and Nikola Tesla. He catches sight of her, and the rift closes.  I have not previously read this book, and I could figure this much out.

And then we get to Lovecraft and Tesla who have apparently done battle with something huge and goopy, and Lovecraft makes a brilliant comment about how he wishes the universe would stop trying to kill them until after they’ve had lunch. I appreciate having some black humor thrown into my supernatural horror. The scene widens, and Sonia and Houdini are also there, and I got the idea that they’re kind of a loose team. At any rate, this monster is done with. Tesla wants to work on something back at his lab; Houdini has a show later. Lovecraft wants to talk to Sonia. Not about their relationship; about the horrible weird skin growths they both seem to have. Lovecraft’s mother might know something about this, and we see at a glance that Sonia’s relationship with her is hardly cordial.

Lovecraft’s mother despises Sonia, is a bit of a harridan, but she also knows her stuff when it comes to Cthulhu-style monsters. She’s disgusted that Lovecraft let himself get infected. She comes up with something that seems to work – and scolds them for engaging monsters directly, rather than safely researching them in a less hands-on fashion. But a moment later, their skin growths erupt.

At Houdini’s show, the woman we saw earlier is sitting in the front row with two friends, also women, also red-haired, also dressed in shades of red. They all meet Houdini backstage after his performance, claiming they’re there to give him a message. This is basically by means of trying to seduce him, and one of them hints that they want him to father babies for them. When next we see him, he’s gone off to find Tesla, begging for help and insisting that he’s being followed by beautiful red-haired women. Tesla, meanwhile, has been working on a helmet, and urges Houdini to try it on and see what happens.

The art of Herald: Lovecraft and Tesla: Bundles of Joy #1 is distinctive. Everyone is a little long and narrow in the face. I like the use of strong shadowed areas, especially on people’s faces. It gives an interesting lighting effect. There is good attention given to the styles of the era which helps immerse us in this world.

There’s a nice balance in the lettering. There are some pages with a lot of information to impart, so there are a bunch of words. But this is broken up with pages that are far more visual, or with shorter, snappier conversations. It’s well done, moving the story along without getting us bogged down in words.

I also like the attention given to little details. I already mentioned clothing styles, but it goes far deeper than that. Mrs. Lovecraft’s attic is full of fascinating things, from an old portrait and children’s toys, to specimens in jars and a mummified human forearm. The furniture we see looks old fashioned. We see a panel of the Lovecraft kitchen with a glimpse of both sink and stove, and they’re time appropriate. Mrs. Lovecraft also apparently has a pet monstrosity of some sort, which I didn’t notice at first, but when I did, I did a double take.

Herald: Lovecraft and Tesla: Bundles of Joy #1 is a good start. The flavor of it is Lovecraftian, with more physical adventure thrown in and less of the overt racism. It’s an interesting read and I’m curious to see where it goes next.

Shub Niggurath does not die easily, and an attempt to kill her may have consequences.