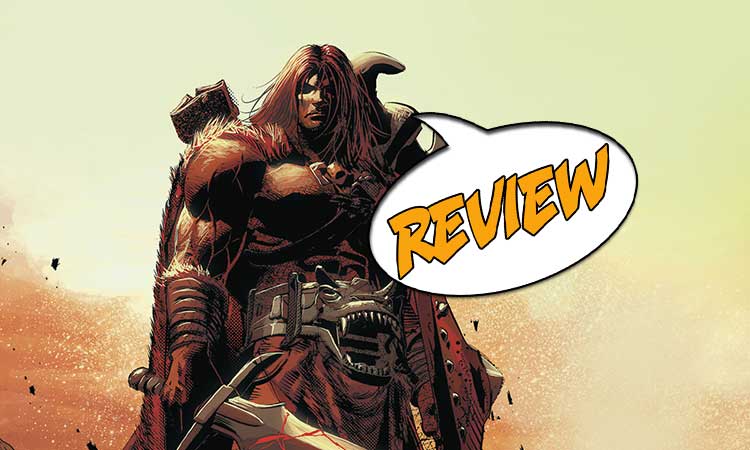 The Mongrel King ventures into the city, with his new companion, the homeless man who bound his wounds and saved his life.  As he launches a quest to find the Sorcerer King who stole him from his world, can he come to terms with his new surroundings and the death of his wife and child?  Find out in our Major Spoilers review! Previously in Berserker Unbound:  with his wife and child killed in an attack, the barbarian known as the Mongrel King faces not only their death, but his cowardice.  He miraculously escapes, falling through a portal from his world into ours, just in time to survive death at the hands of his enemies.  Confused and wounded, he falls in with a homeless man who welcomes him into his camp and takes him on a journey he will never forget.

A BARBARIAN IN KING ARTHUR’S COURT

Berserker Unbound #2 offers a slightly different take on a barbarian lost in the modern age to that seen with previous efforts featuring Conan and Red Sonja.  Whereas they had the advantage of a common language, the Mongrel King has to navigate a world in which he doesn’t understand a word that anyone is saying.

It’s fair to say that Berserker Unbound #2 is a low stakes examination of a fish out of water scenario.  The Mongrel King falls in with a homeless man who takes him in, binds his wounds and offers to help him out.  There’s no sword play, or magic, or monsters to contend with, just two men who have fallen through the cracks and have washed up in a place it’s fair to say neither wanted to be.

Writer Jeff Lemire deftly handles the character of the homeless man.  While he protests to his new companion that he enjoys his solitude and prefers not to talk, he is depicted as going on at great length, indicating in fact he does miss the company of his fellow man.  It’s a nice, humanizing portrait of a homeless person that most people wouldn’t think about as they go about their normal day-to-day life.

Both men are born survivors, and while the Mongrel King is initially disoriented, both at the loss of his wife and child, but his displacement to Earth, he quickly understands that to survive in this world, he is best to stick close to his new companion.  Their descent into the city, where the homeless man is looking for food stamps and a free meal at the local center, is as interesting in its own way as any hack and slash combat a book like this would be expected to show.

SWORDS AND PENS AND INKS

Mike Deodato Jr’s artwork brings a real naturalism to Berserker Unbound.  The Mongrel King is his crowning achievement, a brooding brute of a man barely restraining his natural tendency to carve people up first, and ask questions later.  His front cover, with Frank Martin, is a master class in the depiction of the barbarian trope; a fully realized colossus of a human ready to spring into action at a moment’s notice.

Further, his depiction of the homeless man is poignant.  When you’re life has been reduced to the essentials, it’s no surprise that the man himself is a spare figure, without adornment.  It’s fitting, given the way people tend to ignore the homeless, that this man as depicted by Deodato, is something of the everyman, someone who could vanish into the background.

Frank Martin’s coloring brings the story and the art to vivid life.  Whether it is the oranges and browns of sunset, or the deep blues and blacks of a star spangled night, his work is the final piece of the jigsaw of an outstanding art effort by all concerned.

The overall story of Berserker Unbound #2 is something of a pause for breath.  It’s a chance for the audience to see the main character in a new setting, see how he absorbs his surroundings, and manages a difficult transition.  I suppose that any story featuring a sword-wielding barbarian, at some point, blood and heads will begin to fly.   But, as a respite and a chance to build anticipation, as well as some deft character work, Berserker Unbound #2 is a contemplative piece of work.

A word before we finish here about the depiction of homelessness in Berserker Unbound #2.  Lemire never makes a big deal of it, but it provides the emotional heft to the issue.   It’s stunning that today, in 2019, there is a rising number of homeless people in society’s that pride themselves in their modernity and sense of community.  The unspoken question in this issue ask how it is that men and women today find themselves in such terrible circumstances, living in squalor, relying on handouts, on the margins of a society that seems not serious about finding a solution to their plight. If you were as moved as much as I was, consider donating, or volunteering, or thinking about what you would say to your elected officials to get them to do something to eliminate this scourge.

Berserker Unbound #2 is a fish-out-of-water story with a hard punching twist, that never does anything unexpected, but still delights with the oddity of the storyline, and the skillful examination of people at the margins of society.  While the blood will flow at some point, this issue provides the space for the audience to understand the characters a little bit better.

Excellent art and some fine, unflashy writing bring a different perspective to a trope that might otherwise bog itself down in the expected.