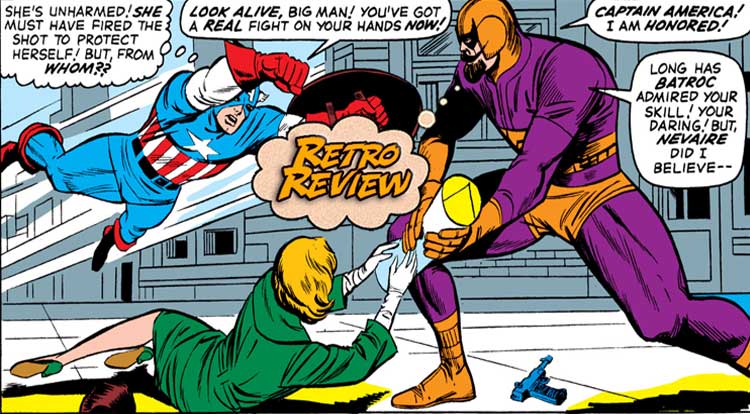 It’s the debut of one of the most important Captain America characters.  Oh… and Sharon Carter’s in this, too.  Your Major Spoilers (Retro) Review of Tales Of Suspense #75 awaits! Previously in Tales Of Suspense:  After an encounter with Baron Zemo near the end of WWII, Captain America was thrown into the freezing Atlantic Ocean, ending up in an iceberg in suspended animation for decades.  When he was awakened by The Avengers, he was a man out of time, tortured by a war that he couldn’t finish and the loss of his friend Bucky.  Fan response to his return was positive and powerful, and after guest-starring in an issue of Tales of Suspense, he was officially given half of Iron Man’s monthly book staring with ToS #59.    A few issues later, he’s still dealing with the ennui of his strange new situation. Sadly, having his own monthly title (or half a title, since 1964 Marvel was being distributed through Independent News, a subsidiary owned by National Periodical Publications, the company that would become DC Comics; as such, they were limited to 11 monthly titles, leading to the split character format here and in ‘Strange Tales’ and ‘Tales To Astonish’) isn’t enough to overcome Steve Rogers’ ennui.  Still, he knows how to get over an existential quandary, setting out to familiarize himself with the strange new world of 1964. While out and about, he…  gets really creepy, actually, following a beautiful young woman who looks familiar to him.  It quickly becomes clear that there’s more going on with her than a little window-shopping, as the woman is acting really shifty and protective of a cylinder she’s carrying.  When a collision causes it to be swapped with a stranger, Steve leaps into action to try and tell her, only to have the girl tell him he’s mistaken.  As for the man who took her package, he has problems of his own! Turns out that she’s not a victim of theft, but a SHIELD agent, protecting a secret formulas for a new incendiary weapon.  And her contact is quickly overwhelmed by the orange-and-purple majesty of Georges Batroc, the mercenary known as Batroc Ze Leepair!  ‘E is vairay Fronch, non?  Mais oui, mon frere!  Ohn hohn hohn HOOOOHN!  Steve’s stalkery behavior gets a new wrinkle, though, as the girl realizes that SHE recognizes him, too.

Though it’s not explained until later (and actually, there are some inconsistencies in the story, when it unfurls), but this is Peggy Carter, a SHIELD agent whose older sister Peggy was one of Cap’s contacts during the war.  Peggy wouldn later be retconned into an aunt and possibly a grand-aunt as the years went on, but here she recognizes Steve from her elder sibling’s endless mooning after the war.  Anyone familiar with the MCU will know what happened to Peggy in the adaptations, though things aren’t quite as awesome in the comics.  Either way, Batroc comes after Peggy once he’s disposed of her fellow SHILED agent, leading to a costumed clash for the ages! Savate proves no match for an old-fashioned right hook, allowing Peggy to get away clean, leaving Captain America to team up with the fightin’ Frenchman to retrieve the cylinder and save Peggy from a terrible death by burning.  Tales Of Suspense #75 also features a battle between Iron Man and The Freak (secretly Happy Hogan) with some interesting Gene Colan art, but the big draw here is the first appearance of the incredibly important Marvel character and also Sharon Carter, earning a better-than-average 3.5 out of 5 stars overall.  The most fascinating part of it all is in the story-behind-the-story, but it’s still interesting to see the classic Lee/Kirby Cap in action and the debut of Batroc, perhaps the most major character in Marvel canon…

Captain America sets out on his own with some really good Kirby/Stone art and the debut of the greatest character in the Marvel Universe as well as some teases with Sharon Carter.