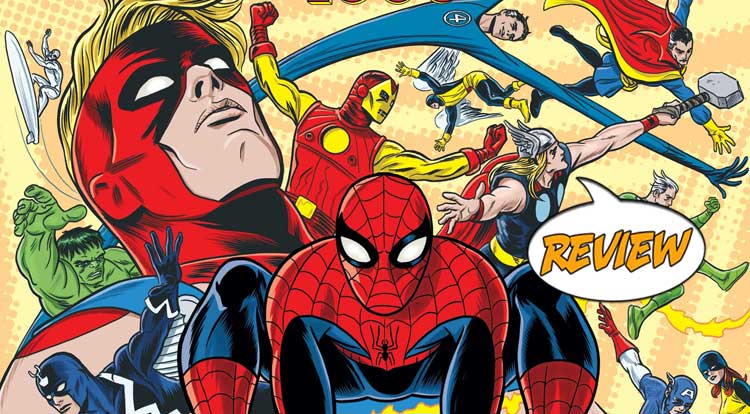 Previously in Marvel Comics:  In celebration of Marvel’s 80th Anniversary, we have gathered together the greatest array of talent ever to be assembled between the covers of a single comic book!  Names from the past, from the present, and even the future! Every page is filled with all-new work from this cavalcade of comic book luminaries!  There is a mystery that threads throughout the Marvel Universe – one that has its origins in MARVEL COMICS #1 and which unites a disparate array of heroes and villains throughout the decades! What is the Eternity Mask, and who is responsible for the conspiracy to keep it hidden?  And what new player will make their startling debut as these secrets are peeled away?

Our story begins in 1939, in the lab of Phineas Horton.  That’s pretty appropriate, given that the Marvel Universe as we know it began there as well, but this issue adds a twist, tying in the 3 Xs, another feature in that book, setting us off on a year-by-year journey through the history of Marvel.  There are some unsurprising moments (1941 is the year of Captain America, because DUH), a few truly unexpected ones (The Thunderer/Dark Avenger is featured in a couple of places, as is The Dark Rider and several other really obscure folks) and a mystery that ends up being investigated by the team of Jimmy Woo, Night Thrasher and Adam “Blue Marvel” Brashear.  Along the way, we find time to celebrate Marvel’s greatest characters without focusing entirely on the most popular.  There’s even a Miracleman appearance, which helps me wonder if we’re finally ever going to see the end of that series.  Through it all is the recurring theme of The Eternity Mask, made of a piece of the embodiment of reality itself, leading to the revelation that its latest wearer is actually behind this issue and the “interviewing heroes” conceit.

SOOOO… THIS HAS EVERYBODY IN IT

There are some ties here to the 70th Anniversary Marvel specials of 2009, a lot of continuity knitting and, most surprising of all, some Golden Age heroes who haven’t ever been revived before.  That’s the high point of the issue for me, but there are some nice art moments in these pages.  I like Walt Simonson’s 1963 page, spotlighting Iron Man, and Deodato’s 2019 reveal of The Dark Raider is lovely.  Others are much less so, such as J. Scott Campbell’s 2010 page, spotlighting “Why Mary Jane didn’t marry Peter Parker”, full of peek-a-boo outfits and ending up being a little too meta for my tastes.  1977’s Star Wars spotlight feels like the most out-of-place moment in the book, but there are several less-jarring-but-still-awkward moments, like 1986’s choice of the Howard The Duck movie.  But then again, Howard’s debut year of 1976 was dedicated to the White Tiger, the first Puerto Rican superhero, so it was clearly a tough discussion.  As with any anthology book, the worst part is the variation in art and story, and with 80 different teams over the course of 80s pages, it’s remarkable that this book hits as often as it does.

All in all, this book pulls off something that shouldn’t have been possible: Making a mostly coherent story out of 80 individual one-page shots, with only a few moments that don’t quite land.  Even better, the decision was clearly made to focus on lesser characters (speedball, Hellcat, Citizen V), Marvel’s current darlings (The Black Panther, Captain/Ms. Marvel, X-23) and guys that even I had to look up back story on, making Marvel Comics #1000 a decent reading experience hampered only by some limitations of the framing sequence and the hefty price tag but still worthy of 4 out of 5 stars overall.  The fact that this issue works as a narrative at all is kind of miraculous.

Not only do we get a (mostly) successful year-by-year celebration of Marvel Comics, but we get a mystery that ties together some unexpected bits of history, with a hook for more to come.