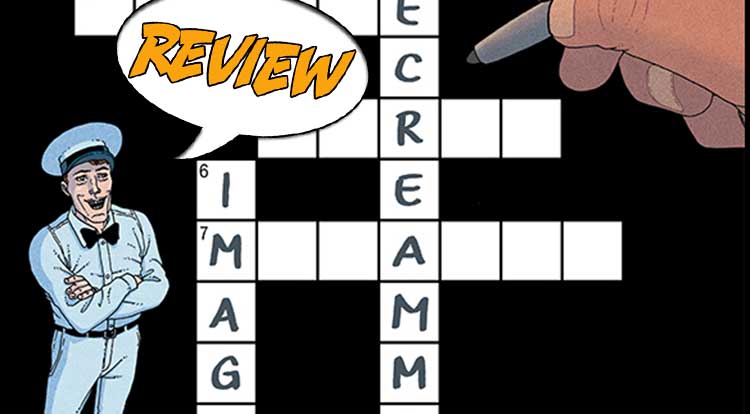 Earl loves crosswords.  He finds happiness in fill in the little blank squares.  But what happens when he finds himself inside a crossword, trying to puzzle his way out, away from an approaching horror, and back home?  Find out in our Major Spoilers review! Previously in Ice Cream Man:  Escaping from another universe, the Ice Cream Man appears amidst the humdrum lives of ordinary humans barely clinging to their sanity.  With a devilish smile, the Ice Cream Man can send those humans spinning off into bug-eyed insanity and a horrible death, and along the way, teach the reader to dread their very existence…

If nothing else, Ice Cream Man #14, and earlier issues as well, make a hell of our suburban existence.  Out there in the ‘burbs, where the streets are silent, the doors firmly locked, the inhabitance lurk furtively behind their curtains, there’s a ripening sense of the chaos nibbling at the edges of their placid existences.  And all it takes from the Ice Cream Man to awaken the suburbanites to the hell that is life with the merest flick of his finger…

Ice Cream Man #14, oddly, offers a sort of happy ending utterly absent from its predecessors.  Whether it is a dying narrator in the back of an ambulance, or a suicide plunging towards a sidewalk, or an astronaut about to face the worst thing in the universe, there are no happy endings for the characters in this series.  And yet, despite all this, there’s a happy reunion on offer at the end of this issue, and one wonders if that is a sign of things to come?  Or maybe writer M. Maxwell Prince had a moment of weakness, and future issues will be as cold-blooded and alienated as their earlier counterparts were.

No matter.  For the most part, Ice Cream Man #14 carries on his patented approach.  Earl loves his crosswords.  In those little white boxes, he can make sure that everything lines up neat and tidy, unlike his existence with his wife that, for reasons explained later in the issue, is a joyless existence burdened by reproach and her seeming descent into insanity.

At heart, despite its slightly rosy ending, Ice Cream Man #14 is an existential horror story.  In it, just under the skin, are characters ready to murder each other.  Chaos is at hand; ready to undermine the moorings of everyday existence.  Beneath the façade, the verities of ordinary human existence are apt to be felled at a stroke, exposing the raw, howling emptiness of existence.  It’s dressed up a little by Martin Marozzo’s fine art, but nonetheless, if you as the reader aren’t left a little shaken by this, and all the other issues, check your pulse.

Marozzo’s art is a real highpoint in Ice Cream #14.  Not only his fine line work, but also the clever way the panels morph to mimic the layout of a crossword.  Square boxes begin to proliferate, as Earl falls out of reality into a black wilderness as he faces the realities of his life.  The normal panels reducing in size mimics the breakdown in Earl’s life.  As he fights back, the little boxes of art begin to reassemble into a normal panel layout, demonstrating how he has (just) managed to drag his life back together.

The beauty of Ice Cream Man #14 lies in not only the question of existence, but also the everyday tropes of horror, particularly the rising sense of menace.  There’s a definite feel that everything is happening at twilight, and this dim lighting matches the mood of the story.  The workers building a guesthouse in the backyard of Earl’s house morph at times into ravenous monsters ready to eat his wife.  These sudden shifts in tone and art are the comic equivalent of a jump scare; and while they feel, as they do in the movies, a little cheap, that doesn’t undermine their ability to startle and cause dismay.

BOTTOM LINE:  FOUR ACROSS AND ALL THE WAY DOWN

Ice Cream Man #14 is, aside from the unusual happy(ish) ending, another spooky issue in a series that has become defined by its savage examination of the human condition.  Despair, depression, sadness – all of these are factors in a story that tells us a lot about the dark heart of suburbia.  The quiet desperation at the heart of Earl’s story, and that of his wife, lends itself to a horror story.  It also feels, at times, that if you look hard enough at the issue, it’s telling a story not just about two characters trapped in the sorrows of their lives, but also a story about you, dear reader.

Existential dread and the horrors of suburbia fuse into a delicious nightmare ride in Ice Cream Man #14. Come for the frozen treats and catch a glimpse of the ultimate nullity of (your) existence.