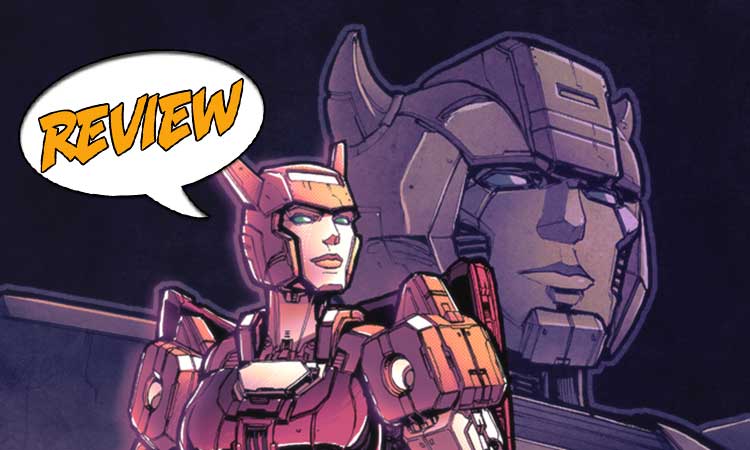 Sentinel Prime arrives to take a hand in the conflict, while Pax Orion pushes for a better way. It all goes sideways when Megatron makes a move that causes Bumblebee to be drawn deeper into the conflict. TRANSFORMERS #11 from IDW Publishing is on store shelves! Previously in TRANSFORMERS: A silent march was held in honor of the fallen Brainstorm and Rubble, while Elita-1 and Bumblebee speak of the future of the Ascenticons. While Orion Pax still pushes for a united front in the handling of the recent conflicts while Megatron pushes for a more aggressive approach. As he leaves the contentious meeting, Megatron is attacked and Bumblebee and Elita-1 must protect the senator from the angry crowds. Later, as Megatron secretly meets with his confederate Shockwave, Prowl arrives at the headquarters of the Ascenticons intent on retreating Barricade, who has recently stepped away from security. He and his operatives are denied entry by Soundwave, even as Sentinel Prime arrives to take control of the situations which are threatening their very world.

THE DRUMS OF WAR ARE TUNED

Sentinel Prime has returned, and he is not pleased at the way Orion Pax the others have handled the events which have transpired. Pax Orion continues to press for a peaceful resolution, but Sentinel Prime wants a stronger hand. He tells the young senator to talk to Megatron, but orders that something be done about Barricade by nightfall, one way or the other.

Megatron is not pleased at the way Soundwave handled the confrontation with Prowl, and his mishandling of the Quake situation infuriated Megatron even ore. He sends word to Shockwave to have Barricade removed from the building. Bumblebee, meanwhile, is still distracted by Windblade, who is in stasis after the attack on her. Pax Orion tells Bumblebee he needs to leave Megatron’s guard, it could be an issue when they come for Barricade, but Bumblebee refuses. His obligation to Rubble and his desire to help Orion override any apprehension he feels about being perceived as an enemy.

Meanwhile, on Megatron’s orders, he sends a strike team of Visper, Stormcloud and Sixshot to retrieve Barricade from Ascention headquarters. Things do not go as he plans, and Bumblebee once again finds himself battling his fellow Cybertronians. Are they successful? And what does Megatron’s latest move spell for the coming conflict?

The story of the times leading up to the great conflict between the Autobots and Decepticons for the heart of Cybertron continues with this issue, and Brian Ruckley (Highlander: The American Dream, Rogue Trooper) continues to bring us as many twists and turns as a Hot Wheels stunt track. One of the most suspenseful things when it comes to this story has always been the fore-knowledge of where all the memory chips will fall. Once again, Ruckley continues to keep the reader guessing as he tells his story. You know what will ultimately happen, but instead of stealing the thunder of the story, he is able to keep you glued to the page as you watch it unfold. Having characters not be solidified in their eventual roles is genius, and you wait to see if there will be flips or re-alliances. Two of his best characterizations come from Pax Orion and Bumblebee. While you see Pax Orion clinging to his devotion to peace, even in the face of his friend Megatron’s declarations for an aggressive retaliation, you realize this was something ingrained into the character all along. It will carry over into his eventually ascension, making the ultimate outcome even more painful. Bumblebee, on the other hand, has a darker voice. He is a spy and is having a hard time justifying it to himself. He questions his actions, and is a far cry from the cheerful character we know and love. It makes his attempts at humor more the heartbreaking.

Angela Hernandez (Transformers) and Anna Malkova (Transformers, Red Fury) split the art duties on this issue, with Hernandez handling pages 8-17 and Malkova providing 1-7 and 18-20. This is different than what was originally solicited, but no matter, the art is great. They two artist are so skilled you barley notice any change in the art, if you noticed at all. Different colorist in the form of Joana LaFuente (G.I. Joe, Fence) and Josh Burcham (Samurai Jack, Optimus Prime) deliver excellent work on the title, and overall the effect is seamless despite the multiple artists.

This issue is a big one, not only for the introduction of a familiar symbol, but for the slow build of pressure which will eventually lead all of the characters to choose sides and wage war. Big things are happening here and we get closer to the culmination of historical events.

Solid action, great characterization, and a bevy of characters. This issue of Transformers will have you wondering what the creative team can throw at you next.

A landmark issue you don’t want to miss. Make sure your pull list is complete with this one.