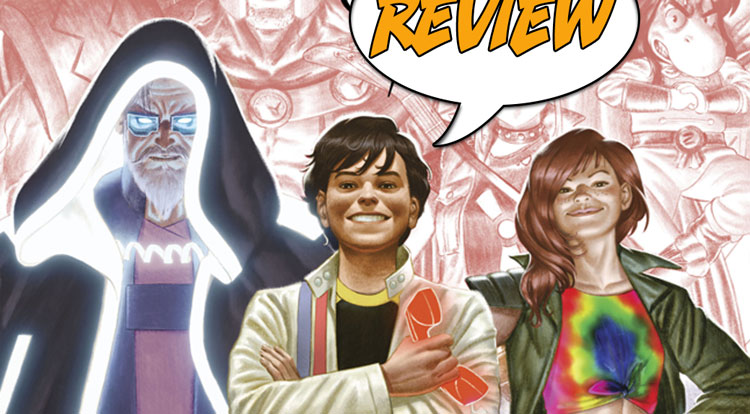 Mister Thunderbolt’s nefarious plan gives superpowers to thousands of people in Metropolis comes to fruition. What could possibly go wrong? And is anyone equipped to deal with this craziness? Find out in Dial H for Hero #6! Previously in Dial H for Hero: The mysterious Mr. Thunderbolt has fled with the H-Dial, and Miguel ran after him. He finds himself in the Heroverse running through the origins of several of DC’s best-known heroes. He also meets The Operator, who was once Robby Reed (previous finder of the H-Dial). The H-Dial harnesses one of the fundamental forces of the universe – that which can turn people into heroes…or villains. They have a discussion where Miguel learns that a hero’s secret origin occurs in the split-second when they decide what to do with their powers. We go through Miguel’s past and he realizes he has not yet had his moment. Meanwhile, Summer goes to Metropolis in the hopes of finding Miguel there, and she arrives just as Mister Thunderbolt’s plan turns every phone in Metropolis into an H-Dial!

MORE HEROS THAN YOU CAN SHAKE A STICK AT

Dial H for Hero #6 opens in Metropolis where Summer uses one of the many H-Dials and becomes Lo Lo Kick You – again. This is strange enough, but when she looks up, she sees the astonishing sight of hundreds of people who have all become heroes simultaneously. What could possibly go wrong?

In the Heroverse, the Operator informs Miguel that this burgeoning of heroes could spell the destruction of Metropolis. He also found a cyan Dial when he was traveling the Multiverse. (Cyan, eh? How’s your color theory involving light?) These new heroes are undefined; they need someone to guide them to their origins. (Yes, it’s a little meta.) The Operator cannot do it; Miguel needs to dial.

Meanwhile Summer/Lo Lo is the only one in Metropolis who has a clue what is happening, and she realizes she cannot take down and contain all these new heroes on her own. Of course, this also involves a plane which is going to crash – and she cannot fly. This leads to a fascinating juxtaposition of Lo Lo’s plight (where there is never a flying superhero around when you need one) and Miguel’s origin story. The story also ties back to Miguel’s early encounter with Superman in a way that’s meaningful and which pulls things together.

I also love the way Miguel deals with his fears and worries. He mentally puts them in the form of a letter to Superman. It’s a creative way to get to the heart of what Miguel is thinking, and over time we can see how his experiences have had an effect on him. He saves the day with some good character growth and meets up with Summer. But Mister Thunderbolt has gotten away, and he still has the H-Dial, and now we know there’s at least one more dial in the mix – and he knows it too.

SO MUCH CRAZY GOODNESS

Dial H for Hero #6 again delivers the fun and creativity in the art. We’ve seen a whole spectrum of heroes and origins in previous issues, but this issue blows everything out of the water. Metropolis is crazy with heroes and we get little hints of so many of them. They cut across so many different styles from the very cartoony to realistic, golden age to anime – it’s delightful.

But this is a book that lets the creative team really push the envelope. There are four pages where Summer’s story and Miguel’s story overlap while not being on the same world. Summer’s story continues in full color, but in the background, covered over in part by Miguel’s story which is presented as pages from a different book. Not only that, it’s colored in shades of cyan. We see all of Miguel’s story, which makes sense because he’s the hero. We see various bits and pieces of Summer’s story, but those pieces are enough for us to get a sense of what’s going on even if we don’t see all of it. I’ve never seen anything quite like it and I think it’s cool.

BOTTOM LINE: PUTTING FUN BACK INTO BEING A HERO

I enjoy a good story about getting the better of one’s self-doubt, where a hero can be heroic and find joy in it. Miguel is too young to be thoroughly jaded or cynical. And while there is a fair amount of wackiness, there is just enough control that this book doesn’t feel completely random.

Metropolis is going crazy, thanks to Mister Thunderbolt, and where’s Superman when you need him?