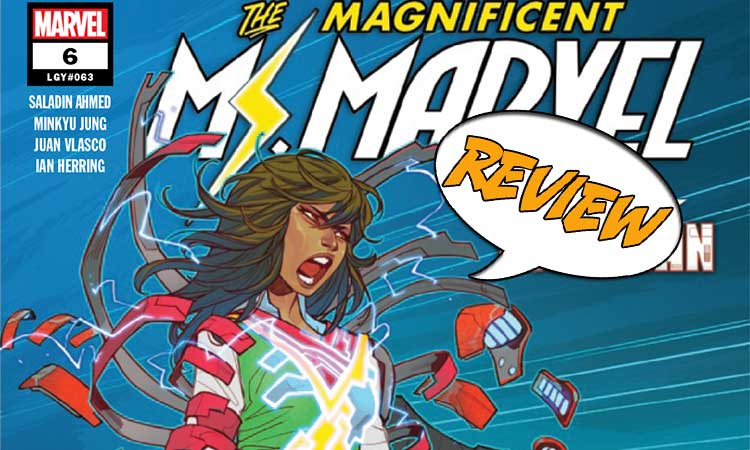 Ms. Marvel is back on Earth with her fancy new suit. But Kamala is now forced to face a type of enemy she’s never had to face before: Terminal illness. Your Major Spoilers review of Ms. Marvel #6 awaits. Previously in The Magnificent Ms. Marvel: Kamala and her parents have returned from their adventure on Saffa, she has a new suit, her parents have wiped memories.  More importantly than that, Kamala’s father has revealed that the secret he’s been keeping is that he is dying of a disease that has no cure.

This issue picks up immediately after Kamala’s reveal from last issue.  Understandably, Kamala is unsure how to react.  At first she thinks her parents are trying to punish her for her superhero shenanigans, but she’s reminded repeatedly that her parents don’t actually remember that their daughter has a secret identity.  With nothing left to do, she leaves with orders from her parents to live her life as normally as possible. She meets up with Bruno and Nakia, but not before sending a quick text to a mystery person.  Unfortunately, there’s no time for Kamala to be normal when the villain Deathbringer broadcasts himself from the scene of a bus hijacking, specifically calling out Ms. Marvel. Without hesitation, Ms. Marvel springs into action and confronts Deathbringer, but is quickly overwhelmed by the villains powers.  This is when her new suit begins to reveal its abilities and saves Kamala and takes down Deathbringer. With the threat taken care of, the mystery person Ms. Marvel texted earlier shows up and it’s Tony Stark himself. Unfortunately, he doesn’t come with good news. It seems that Kamala’s father’s disease is truly terminal and not even the avenger can cure it.

Still One Of The Most Relatable Characters Out There

The thing that has stood out to me since Ahmed took over writing duties on Ms. Marvel is the use of internal monologues and this issue doesn’t disappoint in that department.  What’s really nice is that Kamala’s narration isn’t philosophizing about life and death as one might expect.  Instead she ponders on how her life has been all about “standing out” and the pros and cons that go with that. It almost feels completely disconnected from the events of the issue, until the end where it seems to reconnect. It’s just the kind of distracting thought process a teenager would have when having to deal with grief. This is just a smartly written book that works on multiple levels. On the surface it’s a good young adult book, with plenty of drama and angst and action. Below that though there’s some nice symbolism going on, especially the usage of this particular villain, how he’s dealt with, and how it may reflect the more pressing issues Kamala has going on.

Normally I’m a fan of Minkyu Jung’s pencil and it’s not like the art in this issue is bad but there was one issue I had with this book.  My complaint has to do with the faces.  There was a distinct lack of emoting going on here. A prime example is the diner scene between Bruno, Nakia, and Kamala. It felt like each character was assigned an expression and that was it. For an issue with such a heavy subject matter, the characters come off as a bit cold in the face of something so heartbreaking, due to their lack of expression.

One of my favorite parts of Kamala Khan’s tales have been her relationship to her family. So, to see that being threatened by something that Ms. Marvel can’t punch or smash is compelling.  This shows potential in becoming a real character developing moment and I want to see if that comes to fruition. 4 out of 5 Stars.

Ms. Marvel has never shied away from complex situations, but rarely something so personal. Art issues aside, this story has been laid out, so far, in a way that feels understandable but also unique to this title.