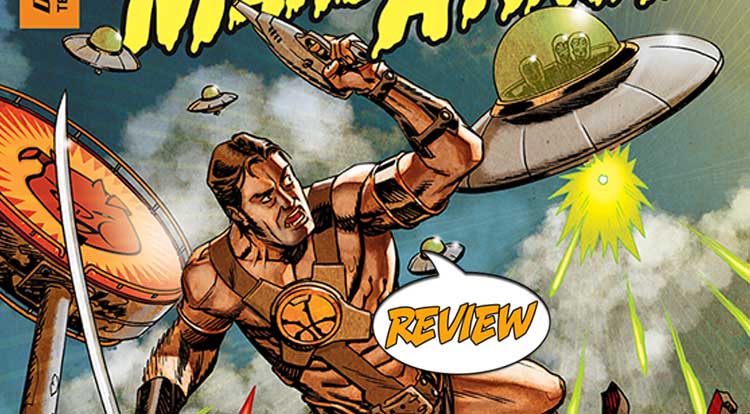 Previously in Warlord Of Mars Attacks:  As the Martians use their monster crab machines to destroy society as we know it,  John must scour the deepest recesses of his mind, and find the memory of Barsoom (aka Mars!) that will unlock the secret to getting these damn lil’ green dudes off our planet!

In a nice nod to the stories of Edgar Rice Burroughs, we open with the narrative of Dr. Edgar Norman (albeit from his Blackberry, rather than a journal), explaining how the murderous aliens of trading card fame made their way to Earth. After a few pages of the classic M.A. hijinks (including a cadre of aliens ack-acking their way to a strip club, where a platform heel busts one of their breathing helmets), we find John Carter in a diner in Arizona, where Dr. Norman and his new friends have taken him after his awakening. John has only the vaguest memories of the strange creatures attacking Earth and is saddened to hear that the planet is dead in the modern day. With a little help from a hypnotist, John manages to unlock his memories of things that have not happened yet through a little of the old #TimeTravelShenanigans, and we finally see the origins of the Martians as a Barsoomian experiment gone horribly wrong. The “Moonheads”, as they came to be known, destroyed Barsoom, but still retain a fear of John from their shared memories, leading the Warlord of Mars to suit up and battle them again (thanks to a local saddle shop that whips up his harness and boots and such.) As the issue ends, John is trying to transport himself through the mists back to the Barsoom he knows, in the hopes of keeping the Moonheads from ever existing, when their leader arrives… with a disintegration ray!

A MAN OUT OF TIME

Trying to untangle the timelines of this issue has already given me a headache, but suffice to say that there’s an explanation given about different Quantum States, and how Barsoom isn’t actually GONE so much as it’s existence has been overwritten. There’s some stuff about suspended animation and a plan to send John back to his Barsoom, which exists over 100 years ago, maybe, perhaps, and now there’s an icepick in my eye. Temporal mechanics aside, this issue is full of character and excellent dialogue, but it feels a little bit slow to me, partly because of the heavy lifting that has to be done to explain the crossover and divergences and such. Parker’s John Carter is a fun protagonist, though, and the moment where he leaps into action from a stolen Martian saucer is a pretty cool visual. Dean Kotz does a good job with the art, giving the Martian Moonheads scratchy, viscerally gross heads under their domes, but that inking style carries over the the human characters as well, making even Carter seems weirdly messy and ill-kempt. That’s a minor complaint in most cases, but the amount of time spent in conversation during the Quantum States explanation makes it really noticeable and distracting for me as a reader.

Even with those questions and slight art issues in play, Warlord of Mars Attacks #3 is mostly successful in melding two seemingly unmeldable properties, giving us the black comedy of Mars Attacks and the traditional pulp-heroism of John Carter at the same time and making it work better than it should ever have, earning 3 out of 5 stars overall. As with so many modern miniseries, this middle chapter will probably be much easier to digest as a chapter of the full story, which makes me want to check this out again once it’s collected in trade.

There are some problems with the art, but strong dialogue and character moments help to overcome them, and the explanation of the crossover works better than it has any right to.