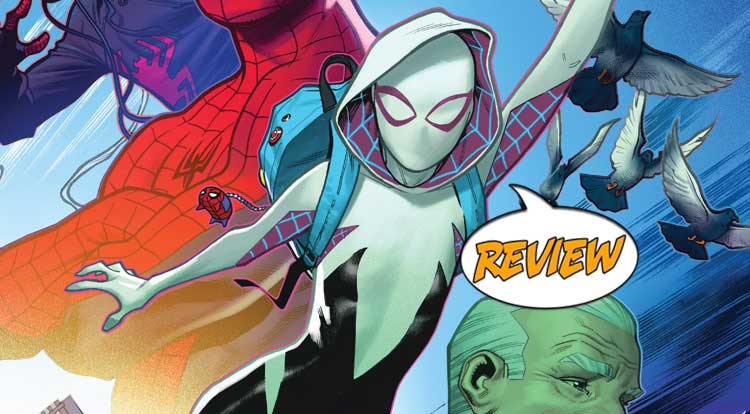 She’s back!  And now, she’s on Earth-616, so look out Spider-Family…  Your Major Spoilers review of Ghost-Spider #1 awaits! Previously in Ghost-Spider: With a cloud of infamy hanging over her head on Earth-65, Gwen Stacy now travels to Earth-616 for super hero action…and school?!  The newest student at ESU is about to get a crash course in multiversity as she splits her time between the world she loves and the world she’s just getting to know!  But what devious villain has eyes on Gwen’s travels?  Is Gwen ready for what comes next?

Now that her identity is public knowledge on her home-world of Earth-65, Gwen Stacy is finding it impossible to live a normal life, get a job or go to school. As this issue opens, she is trying to explain to her bandmates in the Mary Janes what she’s going to do next: Enroll in college on Earth-616, with a little help from Peter Parker and a scholarship established by Tony Stark for visiting aliens. Gwen is a little shaken up by the whole thing, but Peter pulls a few strings and gets her application looked at, leading to a rapid admission. (It’s telling that, in a book with two spider-powered heroes, the circumvention of college red tape is the most fantastical element.) Gwen also gets to pick Peter’s brain about her recent power problems, leading him to explain that her symbiotic suit, which is made of spiders, is malnourished and that she needs to eat more cellulose to keep it happy, something that I’m sure will come up again in the story and as she gets ready to return home, she bumps into a professor on the ESU grounds… a professor who recognizes her immediately!

THE RETURN OF MILES WARREN

This issue seemed like it was going to shy away from the fact that a Gwen Stacy already existed (and died) in the mainstream reality, but the last-page involvement of not one, but TWO versions of Warren/The Jackal makes it clear that we’ll be dealing with that soon enough. Indeed, this is a great first issue across the board, with just enough exposition to make it clear what we may have missed in Gwen’s previous book, an explanation of her deal that doesn’t slow everything down completely, and a little bit of costumed action with the native Peter Parker to establish her superhero bonafides. That said, there are some slow moments in this issue, including a fun but kind of aimless discussion about kale chips between Peter and Gwen, but even that end with him warning her about letting the costume have too much. Miyazawa’s art is a lot of fun, too, with the kind of spidery exaggerated bodies for Ghost-Spider and Spider-Man that you’d see in a Todd McFarlane comic back in the 80s, while maintaining strong sense of setting and place. Given that this book takes place in two dimensions, with several characters on both sides, it provides the grounding that the dimension-hopping story will require.

For me, this issue is worth the price of admission for the slightly awkward moment where both Peter and Gwen admit that, while they’re colleagues and friends, it’s still creepy hanging out together out of costume. After he mentions that it’s easier for him, she tells him it’s because he’s ancient, which totally cements the Ghost-Spider/Spider-Gwen character for me, leaving Ghost-Spider #1 with a better-than-average 4 out of 5 stars overall. I had lost track of Gwen after several relaunches and renumberings, so I’m hoping that this book sticks around for a while.

Gwen is off on a whole new adventure, but she’s not leaving everything behind. This issue is the fabled “great jumping-on point” that so many comics want to be.