Welcome to our post-D23 Special installment where we are going to break down five stories that we think dominated the biggest event in the nerd world this year!

Star Wars was on everyone’s lips at this year’s D23. Everyone from Her Universe with their new Ahsoka Tano tee to Disney+ breaking out the full Mandalorian trailer which you can watch below:

After the stories of Jango and Boba Fett, another warrior emerges in the Star Wars universe. “The Mandalorian” is set after the fall of the Empire and before the emergence of the First Order. We follow the travails of a lone gunfighter in the outer reaches of the galaxy far from the authority of the New Republic.

Ahsoka had a little more to do than just appearing on another (awesome!), t-shirt – Disney+ announced another “last season” of Clone Wars. In my memory, this is the third last season of Clone Wars. I adore the show and the way it has exploded the Star Wars universe, so I’m really looking forward to exploring this part of the galaxy a little bit more. Joining Miss Tano on the Disney+ network is Obi-Wan (which we reported on in our last regular Friday installment of the column!), and Cassian Andor. Virtually nothing is known about these two series as it currently stands, beyond the fact that these shows exist. The Obi-Wan series has been embraced with greater fanfare and it will be interesting to see how viewers and subscriptions shake out when they both hit Disney+. The biggest Star Wars news that broke over the weekend was the Rise of Skywalker “Special Look” footage. It’s not officially being called a trailer by the powers that be and considering more than half the video is footage from the original series I find that to be a fair assessment:

The story of a generation comes to an end. Watch the D23 Special Look for Star Wars: #TheRiseofSkywalker. See the film in theaters on December 20.

Whether or not this video relies so heavily on the original trilogy footage because executives are fearful that the actual movie footage won’t draw in as much of the audience or because they are purposefully leaning on the legacy remains to be seen. With only about a minute of new footage there isn’t a lot to be gleaned about the movie itself.

What everyone is freaking out about happens in the last few seconds of this Special Look – Rey with her contacts in and the double-edged Darth Maul. Everyone skipped immediately to the conclusion that we are witnessing “Dark Rey”. Given the fact that Return of the Jedi also featured the protagonist presenting in darker clothing than we saw previously and he maintained his hero status. Personally, I’m not certain whether or not I think embracing or rejecting what has come before would be the better move for RIse of Skywalker.

If you have theories on Dark Rey and how it may come to pass be sure to pop down to our comments section and share! A bunch of information came out about what Marvel Studios’ integration with Disney+ looks like as well including a bunch of information about Falcon and Winter Soldier, which included a poster that has not officially been shared online so we are left with this fan option:

Wyatt Russell (The Walking Dead: Webisodes), was announced to be joining the cast as U.S. Agent. The show was described during the presentation as a:

WandaVision concept art follows which has taken obvious cues from the Tom King Vision series, albeit with a

Kathryn Hahn joins the cast as a “nosy neighbor” which tells us almost nothing about her. I suspect this vaguery is meant to cover a very recognizable Marvel Comics staple.

What If …? released an animated short featuring Peggy Carter as Captain American doing battle against zombies. As someone who has never ever had the remotest interest in zombies, the latter half of this announcement is a real buzzkill for me. The only other detail about this show was a tease of T’Challa attempting to steal the Power Stone in much the same style as we met Star-Lord in the premier Guardians of the Galaxy movie.

The Loki show was also quickly glossed over with the barest of information shared beginning and ending the presentation by announcing Kate Herron (Sex Education), as a sex episode director. Sex Education is a touch controversial and does star a teen, so this feels like a soft confirmation that we’re going to be dealing with child/teen Loki who sprung to popularity in the Marvel comic books post-Thor movie debut. 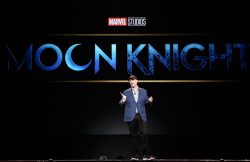 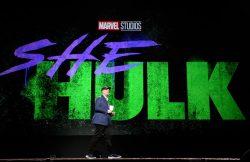 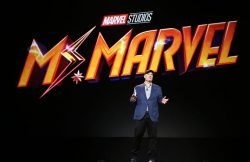 Honestly, the best Disney+ announcements was the collective reveal of Ms Marvel, She-Hulk, and Moon Knight each having their own projects in development. “In development” is a pretty nebulous term which came mean almost anything from creatives being hired to one meeting having transpired between a bunch of upper echelon employees who are going to have nothing to do with the actual making of the shows.

These three characters have been on fans’ lips for a long time, each with an incredible group of supporters in their camps and the reception has been positive considering all we have to go off is a handful of logos.

Now, onto the movies! about the solo movie that is finally hitting the Marvel Cinematic Universe 10 years after the audience was asking for it.

Meanwhile Eternals made a big splash by walking their incredible (and diverse!), cast out on the stage. This coupled with the announcement of castmember Richard Madden’s Game of Thrones brother, Kit Harrington, joining the cast in the role of the Dane Whitman a.k.a. The Black Knight. As a Jon Snow fan, I actually think Harrington is an inspired casting choice. Right at the beginning of the convention there was a rumour that he was slated to take on the role of Wolverine and I’m pleased audiences are going to get a little more geography on the Hugh Jackman version of that James Howlett. Crazy Rich Asians and Captain Marvel star Gemma Chan was revealed to be returning to the MCU in Eternals stepping into the role of Sersi. Hopefully they’ll let her speak more than Captain Marvel did. Chan is a wonderful actor and as this part is being heralded as a lead I can’t wait!

Marvel Studios capped off their D23 presentation by giving us a released date for Black Panther 11 – May 6, 2022. Coogler skirted any real details, but he did say:

. . .hard at work on it trying to give you something special. We’re gonna take our time; we want it to be right.” I’m confident it will absolutely be worth the wait.

… while also managing NOT to reveal the movie’s villain which we are all desperate to learn the identity of. Kraven and Namor being the two fan bets on who T’Challa is going to be going up against.