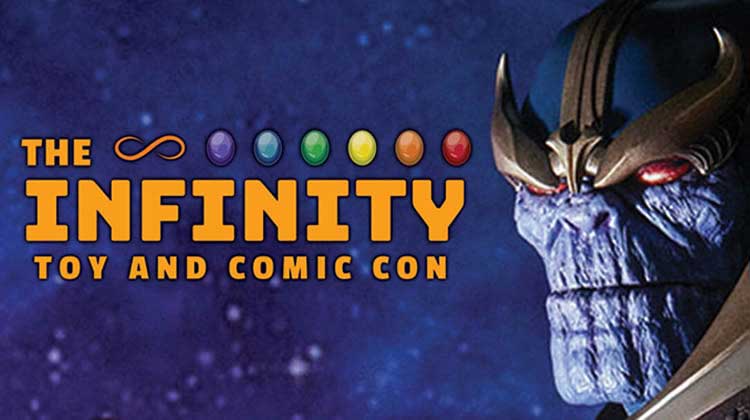 This past weekend I was at Infinity Toy and Comic Convention for the second year in a row! It was a great time on several levels, including the fact that we could drive about 20 minutes from home to this con! How different was that!

Something interesting happened on Sunday morning, the final day of the con. A fellow vendor stopped by, looking for Richard Rivera to ask his advice on how she should handle her booth. She told me something that floored me, that I never thought I’d hear at a con: “I was told by another vendor that because of what I sell, ‘You don’t belong here.’”

HOW WAS INFINITY TOY AND COMIC CON? First, though, here’s what I thought of the convention.

It was a fun event that ran on Saturday and Sunday, and it featured mostly local talent and media. That included Roland Mann, Todd Kelley, Jamie Jones, John Crowther, Paul Mounts, Jonboy Meyers, Lance Footer, and John Martino. It was held in the Osceola Heritage Park, which was a great venue that also had two other gatherings going on at the same time.

As always, Saturday was the biggest day, with Sunday running about half as busy. Each day featured Infinity Stones treasure hunts, cool cars and other genre-related exhibits.

As far as stuff to buy, there was a wide variety of goodies, including anime, Indie comics, toys, and other cool crafty things. They covered the gamut of the genres, from DragonBall Z to Avengers to fantasy.

The one suggestion I would make is to increase their advertising. There were quiet times when a few more attendees would have helped the cons and the vendors. It was great that everyone got the chance to talk with others as much as they wanted, but I felt for the people who traveled a long distance and had to stay in a hotel. Some vendors probably struggled to cover their expenses. This was a case in which more would have been better.

They do run other cons at other times and locations each year, so I hope to get back to them as they happen. Now, the person I was talking with sold Lord of the Rings materials as well as things with mermaids. She was working on making a comic book as well.

I still don’t get this. There were many other people selling LOTR stuff. And mermaids weren’t unusual for the con. There must be something I don’t know about that would make another person tell her that. And I’m sure the folks running Infinity would never want to hear this taking place.

I mean, at this con, there are booths from State Farm Insurance to people who have run small businesses in the area for years. One person is opening a new comic shop in the area as well. At other cons, I’ve bought cookies from Girl Scout troops, talked with Geico about insurance, and found local schools and universities seeking students. At this particular con, I spoke with a person who came from a religious convention in another part of the same complex who came in to see what was happening.

On the other hand, there was a wide variety of things at the con from many points of view, from Zen cartoons to naturalistic healing materials. I’ve often encountered Christian comics as well.

Granted, some materials are best held back from younger eyes. And being family friendly is important since many of the folks who buy passes do it for their entire family. But I believe most cons do a great job of balancing both sides of this equation. We need to grow in understanding each other, and I really believe that cons are a vital part of this process. We get along, even if it is for a relatively short period of time. And many people can find at least something they like as well as others there.

Do I endorse or even understand all that’s there? Of course not! But it’s great to be able to at least explore many of these perspectives. If I end up buying into one, that’s my call. If I don’t, well, at least I gave it a look. But it does help me to begin to understand how others look at things even if I don’t agree with them.

Creativity is revealed in a mind-bending variety of ways. I like that! Unfortunately, unless you are an invited guest or something similar, you have to pay to use space during a con. People who do this work hard to cover their expenses and even turn a profit, if possible.

One also has to buy a pass to go to a con, so it works on both sides of the table. Barring you are wanting to bring in a dangerous weapon, both groups will meet for mutual benefit, it’s hoped. If people don’t buy what you sell, well, you likely won’t be doing it very long.

Other than that, we’re all there, no matter the size or shape, among other things, of the person. Because people have shared interests, friendships on many levels are formed, often across a variety of lines.

So if you can swing the cost and can go through the application process properly, you’ll be there. There is no “you don’t belong here” as far as conventions are concerned or as far as I’m concerned. We all belong there, in my opinion.

What do you think? Should comic cons have more guests from a variety of perspectives or activities? Or should they stay with previously established norms? Whatever your opinion, feel free to express it in the space below!