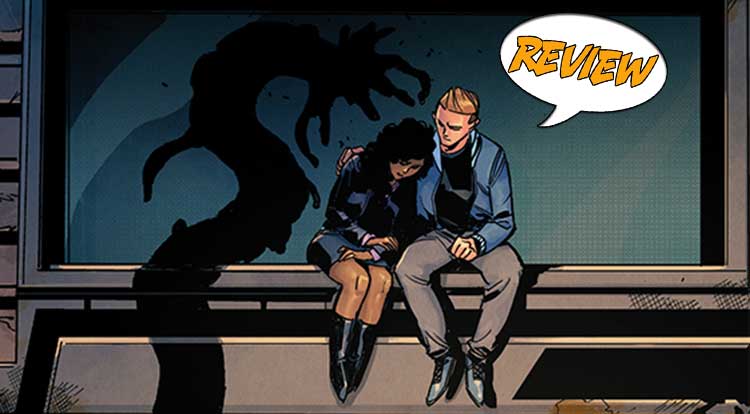 Most people are afraid of what they don’t know. As Alea and Sam explore and learn more about their past, who will they ever be able to talk to about what they’ve found? Find out in Outpost Zero #12! Previously in Outpost Zero: Alea and Sam have started exploring the Stem, beneath the Outpost, and learned that their ship crashed here a hundred years ago. They also begin to realize that many of the people here don’t really understand their origin. Alea’s parents sit down with her and her sister to break the news to them first that their probe shows evidence of life on the planet. They announce this more broadly to everyone on a fight night and, contrary to their expectations, are met with fear and accusation of faking sensational news to get their jobs back.

Outpost Zero #12 is at the point where the expansion of characters and potential plot threads starts contracting again and we find out that more things are interrelated than we might have anticipated. Karen decides not to rely solely on tech, but instead follows Sam and Alea on her own. She gets to the wreckage near the entrance to the Stem and gets an emergency call about Dr. Xi. He is dying and she wants to be there with him.

Mitchell is trying to help Lyss by having her work out like he does. Hitting things makes him feel better; it never occurred to him that it wouldn’t work for her. Seeing the monster was seriously traumatic for her. Mitchell knows something about trauma, and how people cope (or don’t cope), and he doesn’t want her to become like his sister.

Sam and Alea continue talking with the robot about its crew and about its search for the crew. As they talk and explore, they find the area they dropped the cleaning bot into and Alea realizes how angry she is. Their ancestors invented the tech that brought them here, and here they are, a little group of people in the Outpost who have decided that things like science and exploration – the things that make Discovery Team what it is – are not important to survival. I like this because this echoes our own time, and maybe humans throughout time. It’s easy to get complacent with what you have and assume that innovation will somehow just happen. But science doesn’t work that’s way.

Little does she know, her mother echoes virtually the same sentiment and the same frustration, minutes before Security Team arrives to take their drill. This is followed up by a couple reveals that I found truly exciting.

Outpost Zero #12 is a complicated issue that crosses back and forth between storylines. The art, which has been terrific since the beginning, confidently leads us from one scene to the next using multiple techniques to set scenes apart. The color palettes shift; there are interesting establishing shots when one is called for, and there are parallels and contrasts. Specifically, I like the contrast between Dr. Xi, who is on his death bed, but still coherent and connecting with people, and Maddie, who is lost in her drug-created world, connecting with reality only briefly before taking refuge in her own head. I think this also reminds us that trauma can and often does make people feel terribly isolated and alone.

Outpost Zero #12 is dramatic without being melodramatic. It feels very real, and real life has many more quiet moments and small struggles than big showpieces. Every character has a distinct personality, complete with flaws and room to grow. It draws you in, makes you care, and rewards you by slowly revealing the mystery in little bits at a time.

If the people of the Outpost are willing to disband Discovery Team for saying they’ve found traces of life, what will they do if that life is actually found?