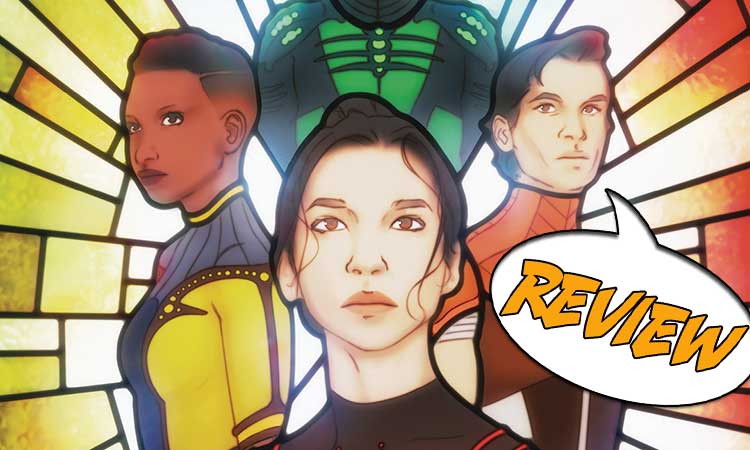 Beacon, Tank, Artisan, and Hazard have incredible powers, but only slivers of memory of who they are. As a powerful enemy approaches, can they learn enough in time to survive? Find out in Psi-Lords #3 from Valiant Entertainment. Previously in Psi-Lords: Beacon, Tank, Hazard, and Artisan have found they are adrift with a mass of dead ships orbiting a dwarf blue star. This is the Gyre. It has enough atmosphere that they can travel across from ship to ship, and by doing so, they meet the Yossari, a race of feline creatures who apologize for not having tribute. This is because of the tattoos they have on their scalps – and they are not the only tattooed beings here. A Widower challenges them for being on the Yossari ship and starts killing Yossari for not having tribute for him. One thing leads to another, and they get into a fight. They just barely manage to take out the Widower, but the Yossari tell them there will be many more Widowers on the way. They spot their own ship, the Octavia Butler, stranded here, make their way to it, and find an intruder in the hold – Scion!

MEMORIES OF THE FUTURE

As Psi-Lords #3 opens, the Widowers have wreaked havoc on the Yossari, who share what little knowledge they have of the newcomers. Scion has met up with the four Earth characters and leads them across to his own ship. We get a humorous interlude, with more cat references, when Tank meets Scion’s alien pet, but they soon get down to business. To get the obvious question out of the way, this Scion is the brother of the Scion they met in the first issue.

Then he gets into a discussion of what Psi-Lords are – superpowerful beings who became known as gods until they too eventually fell. Their ship is hidden somewhere in the Gyre. There is also a mental state known as the Ethereal, and branches of this, representing different aspects, touch each of our four main characters. It’s a kind of cool way to explain their having godlike powers, although it is a bit wordy. As Scion leads them to meditate, Hazard visualizes the Psi-Lords ship, or rather, tomb.

They come out of their trance finding their wounds healed and their hair grown. Time has passed. Also, the things they perceive as memories could be from the past or the future. We get some nice quiet moments such as when Beacon realizes that while she has virtually no memories of her past, she has feelings about people, specifically Tank, whom she feels she has known for most of her life. It complicates things – not only are they disparate individuals to begin with, it seems they may have pre-existing emotional baggage amongst themselves.

There is a great twist as Beacon learns and realizes something else about Scion and what’s going on. Is he truly their friend and mentor, or is he something more sinister?

I CAN’T GET ENOUGH OF THIS ART

The style of the art of Psi-Lords #3 is distinctive and breathtaking. It is both gorgeous and utterly alien. The human characters almost photo-realistic, which can be a strange thing to say in a sci-fi book where everything around them is as unlike our earth as possible. But panel after panel catches subtlety of expression, freezing the micro-moment where an emotion flashes across someone’s face.

That the main characters come across as so genuinely human I think only helps us to read the alien characters and believe in them as well. The Widowers all have creepy masks, so for them it’s all in the body language. The Yossari have a mix of cat-like and human-like features. And the alien pet, Sparkle, which looks like some kind of floating gastropod, is full of personality as well.

Couple that with settings that are just as imaginative, and everything comes together as a perfect whole.

BOTTOM LINE: IN THE THICK OF THINGS

After two issues packed with action, Psi-Lords #3 settles down a bit to fill us in a little about what is going on. That slows it down a little, and this is not a jumping on point (although we’re close enough to the start that it’s not very hard to catch up). I like the philosophical thought that has gone into the concept of the Psi-Lords, but even keeping this concise takes a lot of words and it took me a couple reads to feel like I knew what Scion was talking about. It’s interesting, but a little complicated.

Four astronauts who don’t remember their past struggle to cope with becoming superhuman.