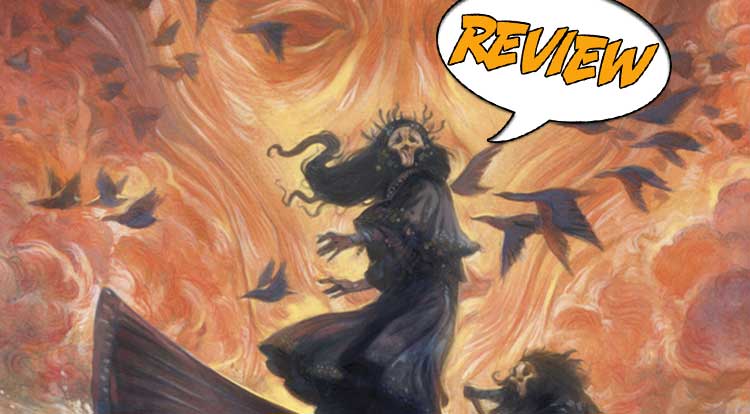 Caliban is tasked by the archangel Raguel to find out Lucifer’s true intentions for the Silver City.  Lucifer is looking for his wife, Sycorax, who is marooned on an island with Thessaly.  In between Heaven and Hell, can any of them find what they are truly looking for?  Find out in our Major Spoilers review! Previously in Lucifer: the archangel Raguel, egged on by his cherub companion Diri, has sent Caliban in search of his father, to determine the Morning Star’s real interest in the Silver City.  Meanwhile, in Hell’s Suicide Forest, Sycorax, Lucifer’s wife, tries to avoid a witch hunter with the aid of a human, Thessaly, and a talking shovel…

TO BE OR NOT TO BE

Lucifer #11 is one of the more interesting comics you will read in 2019.  Where earlier issues have depicted horrifying tales, this latest issue spends most of its page count in earnest discussions about the nature of existence, corruption, and God’s true intent for the universe.

This is not a happy issue.  Lucifer is probably the most content of the characters, but even so, he lives up to his corrupting nature, introducing doubt to Raguel, who only wishes to serve God blindly, without question.  It is this casting of doubt that Lucifer does that is the most interesting aspect of Lucifer #11, which allows him to live up to his moniker of the Prince of Lies.  Elsewhere, Caliban, who has been sent on a mission to find his father, by Raguel, has finally done so.  Only to have Lucifer immediately dismiss him.  Caliban is probably the least interesting character in this issue, mainly through over familiarity from earlier issues, and also because of his essential neediness, which begins to grate.

As I mentioned before, the discussion between Lucifer and Raguel is the most interesting aspect of Lucifer #11.  Living up to being a DC Vertigo title, this issue is more about characterization and a sort of moral philosophy of the main characters.  It’s impossible to take Lucifer at his word that he basically wants to be left alone  – readers with some knowledge of the perception of Lucifer as the Prince of Lies could never really trust anything a writer puts in his mouth.  It makes him a doubly interesting character – one who professes not to care anymore, and yet takes time to sow seeds of doubt in Raguel.  When writer Dan Watters has Lucifer claim that anyone who says he seeks war with Heaven are lying, you are left with the nagging doubt about his truthfulness.

Raguel is something of a proto-Lucifer – an angel who seeks to return to perfection, but has doubts about God’s motivation.  Raguel is an instrument of God’s will, no matter how much he is troubled by what he is tasked with.  In a key scene, Raguel doubts his own motivations – are they his, or God’s?  And when Lucifer gives Raguel an opportunity to experience once again the perfection of non-being, from before God sent him on missions, you sense that the archangel is but one or two steps from his own Fall.

THE HAND OF GOD

I found the artwork by Sebastian Fiumara & Leomacs especially interesting throughout Lucifer #11.  The desolation of Hell’s Suicide Forest contrasts with the spare beauty of the Silver City Dave McCaig’s color also comes into play, bringing a painterly quality to the art that lends the whole enterprise the aspect of religious art.  You certainly see this with the depiction of Raguel, who seems otherworldly against the gross mundanity of physical existence.  One of the finer pieces their combined work comes with Lucifer standing with a tiny portion of the Abyss he carries with him – the rendering of Lucifer as negative space is particularly striking, especially so when he turns to look at the reader and all you can see are the black holes for eyes.

Special note should be made about Steve Wands’ lettering, which when it depicts the discussions between angelic forces, adopts a faux-gothic style that adds resonance when reading it.  He reverts the typeface back to ‘normal’ for the discussions by others, showing a dedication to his form as a means of adding to the reading experience.

Lucifer #11 is a thoughtful issue that engages the mind as well as the eye.  Questions of existence, of free will, the depiction and uses of religion and those who become tools in the endless war between Heaven and Hell are all given free play in this issue.  Combine this with some striking imagery that draws on different human religions and you have an issue that uses diverse sources to make its various points.

Nothing much happens in Lucifer #11, but action isn’t the point of this issue. It’s an interesting issue that uses the medium to good effect, using mystical creatures as a lens through which to discuss several interesting philosophical points. But don’t be put off by that – the artwork is excellent and the imagery of what is shown in Heaven and Hell will linger long in the mind’s eye.