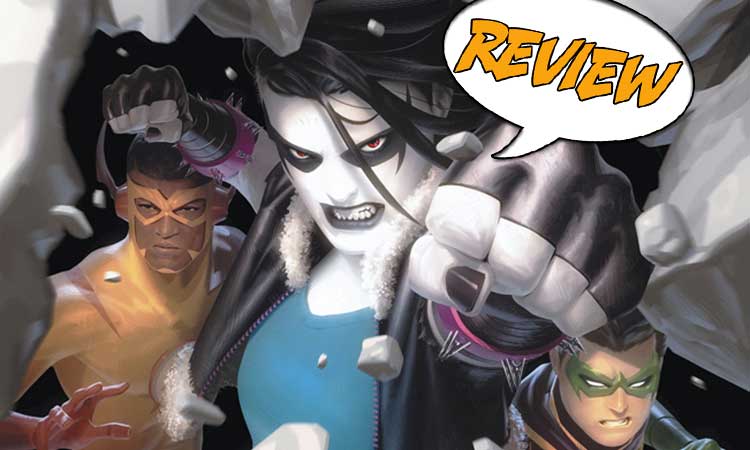 Damian reveals a drastic change in how his private prison is run while trying to uncover if one of his team is a traitor. Meanwhile, Lex Luthor makes a proposition to a beaten Lobo. TEEN TITANS #33 from DC Comics is on store shelves now! Previously in TEEN TITANS: Crush returns from death’s door after being badly beaten by Lobo to find the Teen Titans regrouping in a Pennsylvania farm house owned by Red Arrow’s mother. They don’t have long to form their battle plans as the Main Man finds then and continues his assault. After a violent battle which virtually destroys their safe haven, Djinn uses her powers to “change” the defeated Lobo and the team places him, in chains, on the moon. With Crush no closer to solving the mystery of who her mother is, a changed Lex Luthor approaches Lobo with an offer.

Far away on the barren landscape of Earth’s moon, Lex Luthor’s mechanical drone has discovered where the Teen Titans deposited the chained form of Lobo, the Last Czarnian. Luthor senses that something has changed in the mind of Lobo, and quickly uses his drones to negate that magical change. As Lobo begins to realize exactly what has happened, Luthor makes him an offer which will guarantee his being able to deal with his daughter’s rebellious issues.

Meanwhile on Earth, all seems well. It has been several months since the Teen Titans battled Lobo and Djinn made mystical changes to the mind of their attacker, but the team seems to be working together better than ever before. When the sibling criminal duo of Shimmer and Mammoth make the mistake of venturing into the world of child trafficking, then Damian and his Teen Titans are on hand to take them down, and take them down hard.

Later, Damian meets with Emiko and they discuss the possibility of there being a traitor on the team. After the mass escape of inmates and the reveal of his private prison to the rest of the team, Deathstroke told Damian that one of his own was responsible. He and Emiko discuss the possibilities of who could be a turncoat, but make no real progress on the discovery. Damian has continued with his prison program, but this time with some changes. Those changes, however, darkly mirror the actions of his elders and the danger of his going down a road from where there is no return loom darkly.

Sean Glass (Suicide Squad, Rough Riders) continues his amazing run on Teen Titans and it really sets itself apart from other incarnations of the book. Here he brings in some elements of his Suicide Squad run and takes some themes from previous series, smooths them over, and presents them in a way which makes them feel fresh. The character relationships here are wonderful as well, and I daresay we see more growth for Damian in an issue of Teen Titans than in many issues of the bat books. Damian is building a house of cards using his fellow teammates as building blocks, but he seems to be ignoring the fact that when that house falls, it will mean more than rebuilding for the next time.

And what to say about the art? Well, guest penciller Sean Chen (Iron Man, Wolverine) nails it. Great action scenes, smooth transitions, and great continuity. He seems to understand, visually, that the members of the Teen Titans are in fact, for the most part, teens. They look like teens, and there is no overt sexualization of their looks.  Additionaly, Norm Rapmund (Booster Gold, Aquaman) lends his seasoned abilities to tie it all together with expert inks. Normally the change of artist for an issue is jarring, but here it is smooth and palatable.

The series overall has had a lot of excellent issues, but this one is setting up a major storyline with huge implications. Damian is continuing his prison program despite the failure of the last one but some questions remain. Mainly, does the rest of the team know? This issue picks up several months after the Terminus Agenda and we know at least Djinn is aware of Robin’s actions, but what about the others? Will Damian’s new program work where other’s failed, or will they identify the crisis in time? And what about Djinn? There seems to be the possibility of a love triangle forming here and it too has echoes from Titans past. As stated, this issue goes from a sense of teamwork and unity to a disturbing end with ominous overtones. It is looking to be an amazing build up.

This issue nails Damian and his tenacity and sets up a future conflict that could spell trouble for the team and the rest of the super community.

Sins of the past are echoed here, and the repercussions for the future could be grave. Excellent issue!