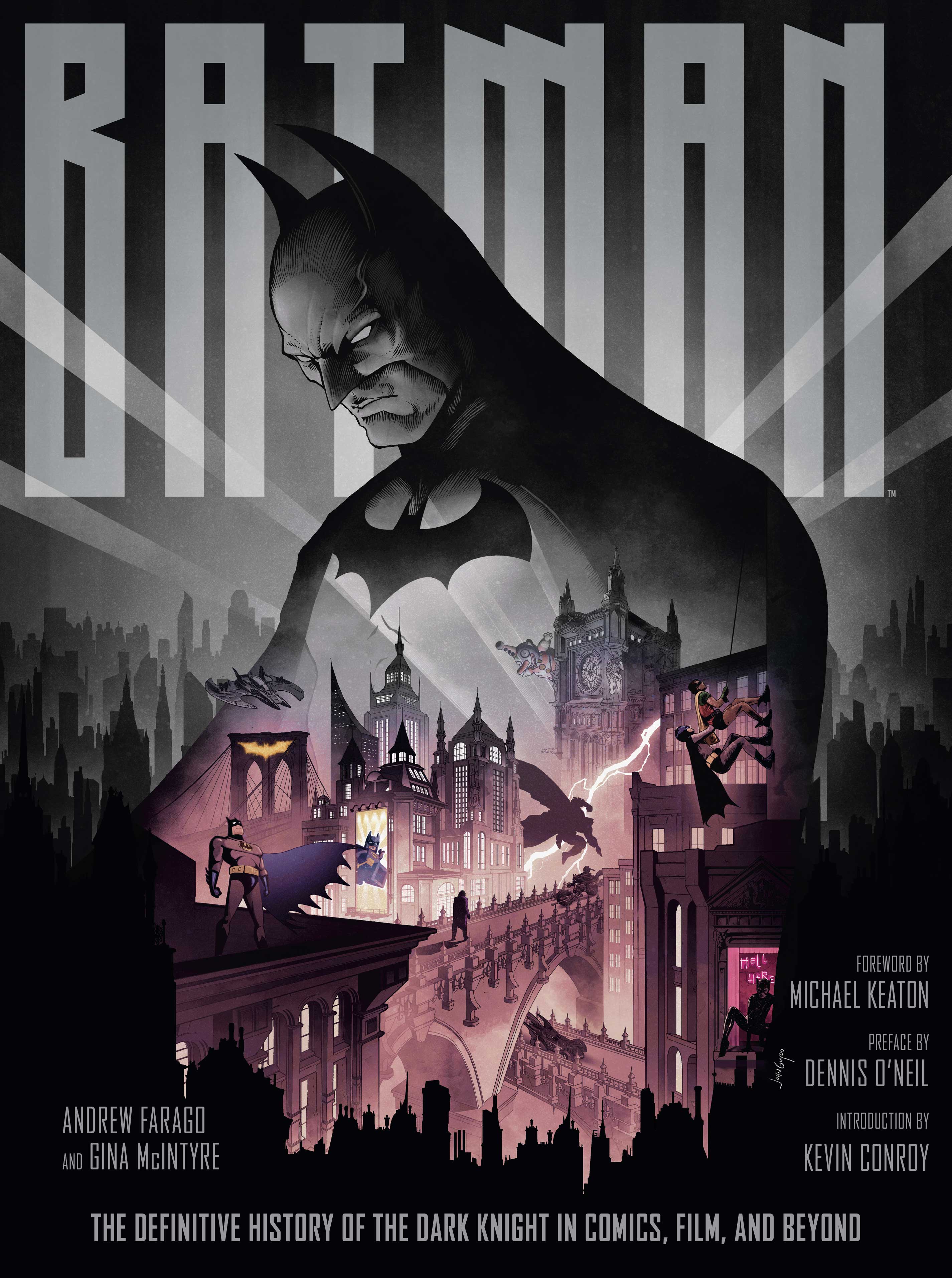 Insight Editions announces Batman: The Definitive History of the Dark Knight in Comics, Film, and Beyond Since his 1939 debut in the pages of Detective Comics, Batman has become an icon, instantly recognizable the world over. Through the years, Gotham City’s guardian has been interpreted in so many radically different ways that we all now have our own Batman. To some, he’s the colorful Caped Crusader who dispatches villains with a POW! To others, he’s the grim Dark Knight hell-bent on avenging the death of his parents. And to others still he’s made of LEGO, has great abs and likes to eat lobster thermidor!

In celebration of the Dark Knight’s 80th Anniversary, this deluxe volume tells the complete story of Batman and the many forms he’s taken across comics, TV, animation, film, video games and beyond, to present a compelling portrait of one of the most recognizable and versatile characters in the history of fiction. Covering the complete history of Batman in vivid detail, the book features exclusive commentary from the key creatives who have been instrumental in building the Dark Knight’s ongoing legacy, including Neal Adams, Tim Burton, Paul Dini, Steve Englehart, Mark Hamill, Grant Morrison, Julie Newmar, Christopher Nolan, Denny O’Neil, Joel Schumacher, Scott Snyder and Zack Snyder.

Along with taking readers on an unparalleled journey into the creation of the most memorable Batman moments in the character’s eighty-year history—from the “Knightfall” comics arc to Tim Burton’s films and the Arkham video game series—the book offers incomparable access to the DC and Warner Bros. archives to deliver an avalanche of never-before-seen visual treasures that are guaranteed to blow the minds of Batman fans everywhere.

Filled with exclusive insert items (more info on next page), Batman: The Definitive History of the Dark Knight in Comics, Film, and Beyond, is the ultimate exploration of a true legend whose impact on our culture has no limits.

This book contains new writing and never-before-seen content, such as:

· A foreword by Michael Keaton, who played the Caped Crusader in Tim Burton’s Batman (1989) and Batman Returns (1992).
· A preface from Dennis O’Neil, a legendary Batman comic book writer and editor.
· An introduction by Kevin Conroy, the voice of Batman in Batman: The Animated Series, and countless other Batman properties including the Arkham Asylum video games.
· Interviews with Christopher Nolan and the other key creatives behind The Dark Knight Trilogy.
· Never-before-seen photography and concept art from the Tim Burton films Batman and Batman Returns
· Sketches, animation cels and storyboards from Batman: The Animated Series and other Batman animated shows, including The Batman and Brave and the Bold.

The book also unearths a lost gem of Batman lore: a rejected 40-page film treatment submitted to WB by Bob Kane, Batman’s co-creator, in 1986, called The Return of Batman.

Comprehensive, compelling and filled with previously unseen treasures, Batman: The Definitive History of the Dark Knight in Comics, Film, and Beyond is the ultimate guide to our most legendary Super Hero.

ABOUT THE CONTRIBUTORS:
Andrew Farago is the curator of San Francisco’s Cartoon Art Museum and the author of The Complete Peanuts Family Album, Totally Awesome: The Greatest Cartoons of the Eighties, and the Harvey Award–winning Teenage Mutant Ninja Turtles: The Ultimate Visual History. In 2015, he received the prestigious Inkpot Award from Comic-Con International. He lives in California with his wife, cartoonist Shaenon K. Garrity, and their son, Robin.

Gina McIntyre is the New York Times best-selling author of Stranger Things: Worlds Turned Upside Down. Her other books include Guillermo Del Toro’s The Shape of Water: Creating a Fairy Tale for Troubled Times, The Art of Ready Player One, and Star Wars Icons: Han Solo. Her writing has appeared in the Los Angeles Times, the Hollywood Reporter, and Entertainment Weekly. She lives with her husband and daughter in Riverside, Illinois.

ABOUT INSIGHT EDITIONS:
Celebrated for its unwavering dedication to quality, Insight Editions is a publisher of innovative books and collectibles that push the boundaries of creativity, design, and production. Through its acclaimed film, television, and gaming program, Insight strives to produce unique books and products that provide new ways to engage with fan-favorite characters and stories.

About Warner Bros. Consumer Products
Warner Bros. Consumer Products (WBCP), a Warner Bros. Entertainment Company, extends the Studio’s powerful portfolio of entertainment brands and franchises into the lives of fans around the world. WBCP partners with best-in-class licensees globally on an award-winning range of toys, fashion, home décor, and publishing inspired by franchises and properties such as DC, the Wizarding World, Looney Tunes and Hanna-Barbera. The division’s successful global themed entertainment business includes groundbreaking experiences such as The Wizarding World of Harry Potter and Warner Bros. World Abu Dhabi. With innovative global licensing and merchandising programs, retail initiatives, promotional partnerships and themed experiences, WBCP is one of the leading licensing and retail merchandising organizations in the world.

About DC
Home to iconic and globally recognized Super Heroes Batman, Superman and Wonder Woman, DC is one of the largest English-language publishers of comics in the world and a creative unit of WarnerMedia, publishing thousands of comic books, graphic novels and magazines each year. Founded in 1934 with the launch of Detective Comics, DC is charged with strategically integrating its stories and characters across Warner Bros. and WarnerMedia properties.