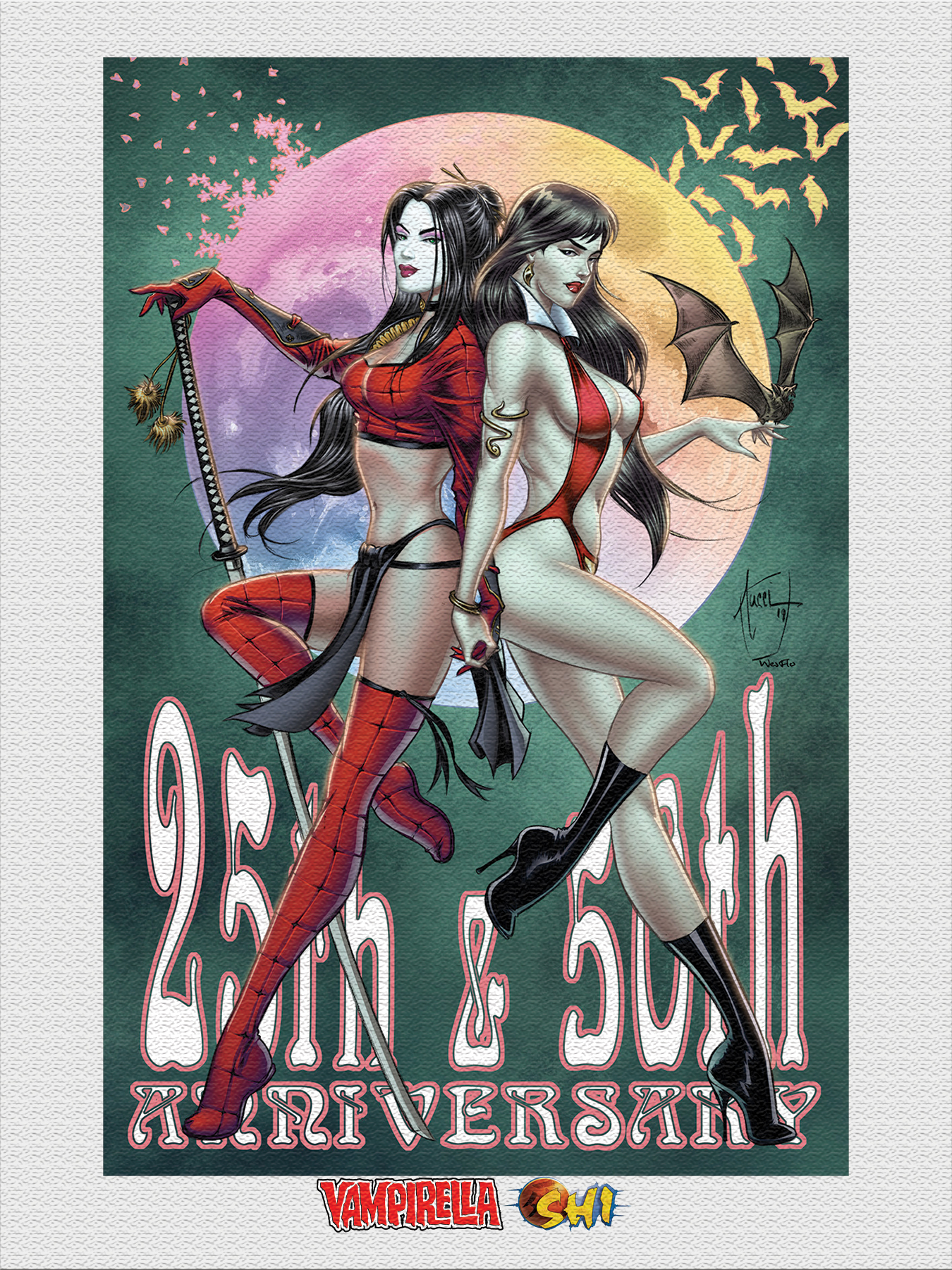 Dynamite announces a special creator exclusive cover for Vampirella #1 by Billy Tucci on Indiegogo! Celebrating the dual celebration of Vampi’s 50th anniversary and the 25th anniversary of Tucci’s Shi!

Live on Indiegogo right now (CLICK HERE!)! The Daughter of Drakulon and Billy Tucci’s Shi share a beautiful cover being offered only on Indiegogo for a limited time. This critically acclaimed and explosive debut of the new ongoing series by Christopher Priest and Ergun Gunduz has already sold a Dynamite 130,000 units both through the Direct Market and outside it with retailer and creator exclusives like this one!

“I’ve had the honor to be associated with Vampirella many times since I first broke into comics 25 years ago,” said Billy Tucci. “This cover not only celebrates Vampirella’s 50th anniversary, but also the 25th anniversary of my own creation, Shi.”

Multiple options are available for those with differing budgets and tastes as well as the ultimate Vampi/Shi collectors out there, but all copies have already been printed and made available to fans in extremely limited quantities on a first-come-first-serve basis. At the base is the original cover by Billy Tucci, with logos and full gorgeous colors by Wes Hartman. Variations include a logo-less “virgin” cover, dressed “black and white,” “black and white virgin” and even a premium “Pure Line Art” edition reproducing Tucci’s flawless original pencil art. Only 300 copies of this cover have been produced! Fans can also get a combo pack with the four base covers, a pack with all four signed or the signed line art cover.

In addition to the comic, Dynamite and Billy Tucci have also turned this historical image into a high-end lithograph! Every detail will really stand out on this high quality 18 by 24 inches print. It’s also available signed and can function as an add-on alongside any of the covers.

Billy Tucci is an award winning writer, artist and publisher. Following a quick sought-after first appearance in Everette Hartsoe’s Razor Annual 1, Tucci’s creation Shi launched straight into the stratosphere of independent comics in 1994. At a time when some major publishers were struggling and creator-owned properties were soaring, Tucci was among those who led the pack. Through his publisher Crusade Fine Arts, Shi has been printed in five languages and sold over 3 million comic books. Top Cow’s Witchblade and David Mack’s Kabuki initially appeared in Shi comics before breaking out as successful franchises as well. Shi has crossed over with Daredevil, Wolverine and Lady Death.

Perhaps most importantly, Tucci and Shi both have long histories with everyone’s favorite vampire heroine. In 1997 Warren Ellis wrote two companion one-shots teaming up the two characters. This was followed by the three part arc “Queen’s Gambit” in Vampirella’s flagship series of the time, written by industry superstars Grant Morrison and Mark Millar and drawn by Amanda Conner. Tucci has additionally done covers for the prestige Vampirella miniseries Death & Destruction, Vampirella & The Scarlet Legion and the recent Roses for the Dead by fellow indie legend Joseph Michael Linsner.

After establishing himself as a talented and versatile artists and building his passionate fanbase, Tucci has worked on major characters through the years as well. Tucci has worked for major publishers on titles such as Heroes for Hire, Harley Quinn, Birds of Prey and others. A Batman tale garnered Tucci an Eisner Award nomination for Best Short Story. His series Sgt. Rock: The Lost Battalion received widespread acclaim and recognition from the military community. His earnest retelling of the Christmas story, “A Child Is Born” has quietly turned into a international blockbuster after winning the Christian Small Publisher Book of the Year Award. Currently he is hard at work on graphic novels Zombie-Sama!, Appalachian Apocalypse and prepping a huge return for Shi as well as reprints.

Don’t miss your chance to get these beautiful exclusive covers! Available for a limited time and in limited quantities on Indiegogo!