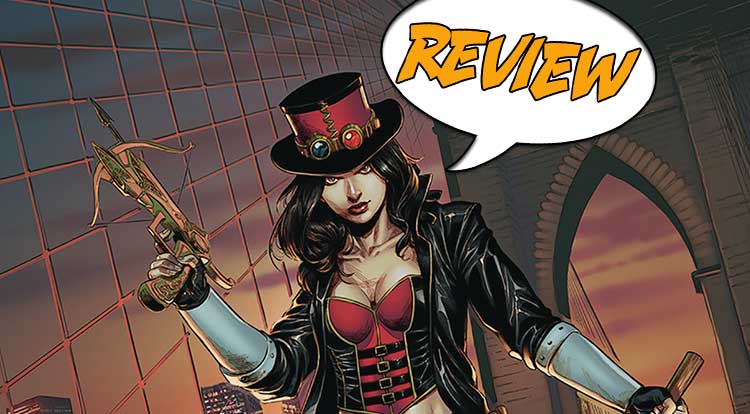 Something has been stolen, something dangerous and it’s up to Liesel Van Helsing to find it. But will she be able to track it down before the people she cares about are harmed? Your Major Spoilers review awaits. Van Helsing Vs. Dracula’s Daughter #1 opens deep in the depths of Van Helsing’s lair as it’s being broken into. One by one Liesel’s security measures are introduced and then promptly bypassed via the intruder’s spooky magic. Before long she is standing in front of what appears to her target, the bones of Dracula himself. Soon later it’s revealed that she has indeed stolen the bones and left without a trace. We then jump forward a couple of weeks to a pawnshop ran by demons. Van Helsing then breaks in and wrecks the place. She quickly handles the henchmen and makes her way to the head honcho who is preoccupied with his newest find, the journal of Elizabeth Van Helsing. Liesel and the owner, who turns out to be a demon named Oliver, square off over what is assumed to be the journal. Using a combination of gadgets, guns, fists, and holy water skinny dipping, Van Helsing is able to bring the demon down.  He gives her the journal, which Van Helsing reveals she didn’t know was there. After finishing off Ollie, Van Helsing turns to the journal for answers.  Elsewhere, Johnathan Harker and Mina have arrived in town to see their old friend Liesel.  While taking a walk the couple is ambushed by a mugger.  A stranger intervenes, kills the mugger and knocks out Johnathan and Mina and it’s revealed that the stranger is none other than Dracula’s Daughter herself.

Remember those direct to DVD movies that would come on Saturday afternoons after the cartoons and infomercials were over? They were inoffensive and basic, and a decent way to kill an hour or so. That’s basically what Van Helsing Vs. Dracula’s Daughter #1 is. There’s nothing outright bad about it, but nothing really unique or mind-blowing either.  There’s a confident protagonist with a penchant for quippy dialogue, the head demon is overtly disgusting and his henchmen are dense and disposable, and there’s just enough pandering to the male gaze to entice but keep it TV-14. Just like those old movies, I can’t say that a week from now I’ll remember this book, but while I was reading it, I can’t say that I wasn’t entertained. Even though I know I’ve seen this plot before, there was just enough done to make it not come off as cliche but not quite enough to make it more than an easily digestible piece of content. The cliffhanger was also decent enough that I may revisit this miniseries just to get more of this brand mindless entertainment. If you’re looking for a quick, turn your brain off and enjoy, comic to read, this should satisfy your need.

Anyone who’s even glanced at the Zenescope section at the comic store knows that the company has a certain style. This book however is actually pretty thin on the gratuitous t&a shots. There are some and I do question the effectiveness of a corset as a costume, but it doesn’t come off as way over the top. Subject matter aside, this is a well drawn book. It’s straight-forward art, the action is easy to follow, and there’s great uses of shadows that fit perfectly with the kitschy horror themes in this book.

BOTTOM LINE: IT COULD BE WORSE

At the end of the day, Van Helsing Vs. Dracula’s Daughter #1 is a book that’s just fine. The story isn’t a difficult to decipher and the artwork does a good job enhancing the things that are and aren’t being said in the dialogue boxes. It might’ve been nice to see something a little more unique, but sometimes there’s nothing wrong with having something that’s not challenging but is just entertaining and this book fits that bill perfectly.   3 out of 5 starts

The plot is paint by numbers, but a fun main character, good art, and just enough cheesiness makes this a fun read regardless.