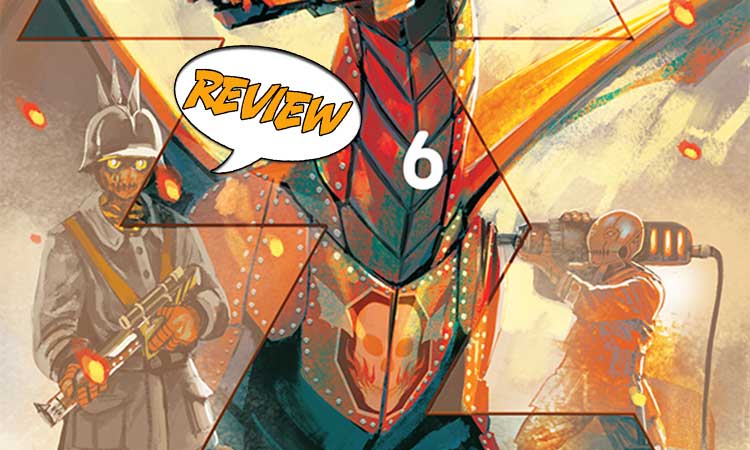 A group of six teenagers play a game and were thrown into a magical fantasy world of Die. Two years later, five of them returned. Now they find themselves as middle aged men and women back in the world they survived as teens. After some party tensions, the group has split into two forces despite the dangers that they face. Find out if they are able to survive in DIE #6 by Image Comics. Previously in Die: A young group of six people are transported from their tabletop game to the science fantasy world of Die. They reappeared two years later in the real world as a group of five. Now these kids have grown to adulthood, have jobs, and even family. Yet when a bloodied twenty sided die appears in a mysterious package they are transported back to Die to deal with the companion they left behind.

The party is split, one group wants to go home to the real world and the other one preferring to stay in the world of Die. This book follows Ash, a person who can control emotions, Matt, who uses his sorrow to form a powerful sword, and Angela, who is a cyborg that must pay a financial toll to keep her abilities.. These three protagonists are holding their old friend, Sol. Sol was the person who was left in Die and had his mind slowly deteriorating. Even in death, Sol is slowly losing his sanity. The issue begins with Sol in chains in front of the party and Ash contemplating torture to get the information she needs from him. The objective is to find a way to take Sol out of the occupied Glass Town but they need to acquire the currency for Angela to be able to use her abilities. The issue is that Fair gold disappears at dawn and they must collect a pretty high amount to escape Glass Town. To acquire the gold they need, they have to find a way to cut gold costs and to do so Angela must part with her cybernetic dog, Case.

After an explosive argument between Ash and Angela, Angela runs away to prepare for what must be done. She attempts to return Case to the people who gave him to her but they reject the offer. Angela struggles leaving Case because of Case’s loyalty. Through some flashbacks, Angela has had several failed marriages and relationships and is having a hard time jump starting her career. Angela then parts with her dog to save on the price of Fair Gold. In her despair, Matt uses his Grief Knight powers to comfort her and in turn powers his own abilities.

After they acquire the needed gold, Angela conceals the party and they are able to hack a dragon. On the back of the dragon, they head to the city known as Angria. After landing, they are greeted by a middle age women on horseback who refers to Ash as mother.

There is a sense of realism in this book that is extremely captivating. A depth of emotion shown here through the dialogue and the art that allows you to go into the world with our heroes. I play quite a bit of Tabletop Role-playing Games and when you enter these stories there is often a disconnect between player and character. So when reading a book that is based on a TTRPG, the story usually has a tone of that jovial table atmosphere. In this book, they emphasize the physical and emotional struggle of the party members. This concept makes it a near perfect book to my tastes.

I once heard a quote that once stated that strong people have strong personalities and strong personalities are destined to clash. In my own writing and creative works I have to constantly remind myself that butting heads is a natural part of realistic characters. When Ash and Angela get into their argument there was tension. This tension makes the story interesting and gives the characters something to be developed in future issues in the book. A lot of good stories also have a degree of sacrifice from the heroes. The sacrifice of animals is a common trope to try to evolve a character. Angela has constantly received disappointment after disappointment in her life and have seen people leave her and have left other people. The death of the dog is another disappointment but there is some light to this scene. Angela goes right to the arms of Matt and they share their grief. I love this moment. This moment of companionship between friends and allies that are in a terrible situation. Despite the conflict and disagreement, these two people are still willing to help each other and that is beautiful.

I loved this book. I was captivated from the first moment with the artwork and kept reading for the story. This is an easy recommendation from me even if you are not interested in tabletop games. The strength of the story, the tension between strong characters, and a captivating art style compels me to add this to my reading list.

The strength of the story, the tension between strong characters, and a captivating art style compels me to add this to my reading list.