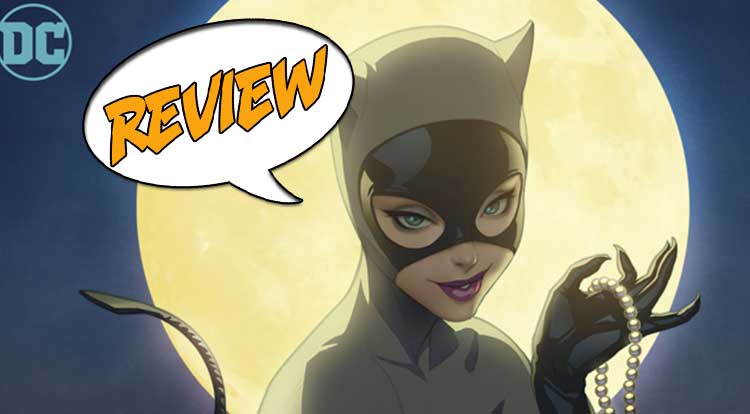 Which is the prize, which is the MacGuffin, and who is behind it all? Ponder along in Catwoman #14! Previously in Catwoman: Selina Kyle is in Villa Hermosa hot on the trail of a mysterious artifact which holds the secret to a mysterious map. But the Creel family also has their eyes on the artifact, and the crime families of Villa Hermosa are in flux.

WHAT WE DO FOR LOVE

Catwoman #14 opens with Selina plunging into the water, shot, bleeding, and thinking about Batman, a dramatic and sweet opening before we flash back to just how we got to this point. One rainy day, she’s sitting in a bar when a woman pulls up the seat next to her, introduces herself as Karen Rain, and says she’s the one who called her. She has a proposition. Her husband was the accountant who did the books for all the crime families in Villa Hermosa. He was a meticulous record keeper, but he’s now dead. The file is in the hands of the police now. If Karen can just get enough money to get out of town, she’s willing to let Selina have the information about the crime syndicates’ accounts.

One evening the files are being moved via armored car with a police escort and the Russians are planning to make a grab for them. This is where Catwoman deftly steps in. The police find themselves confined to a small area as explosions start going off around them, and Catwoman is in the thick of things. She grabs the briefcase holding the files and is attacked by an armored character using ultrasonic waves that mess with her sense of balance, and trigger some aphasia, delightfully rendered in the dialogue. There is a tussle for the briefcase, which Catwoman leaves behind as she absconds with the actual papers.

But she is in someone else’s crosshairs. The gunshot hits her mid torso and knocks her off the roof of a building into the river below. She thinks she’s had it when a hand reaches out and a caped figure pulls her into a small boat. Not the cape she was expecting though; instead, it’s Jim Craddock, Gentleman Ghost. He patches her up and tells her that while that file she has is valuable, word on the street is that the big prize is the Cat herself. I like the Gentleman Ghost – he isn’t trying to kill her; that’s not his reputation. But he sure does want that file.

I enjoyed reading this book quite a bit. I like how the romantic feelings Selina has for Batman are apparent, how she bounces her train of thought off what she thinks he might say to her. Yet she can still push that aside to work on what she’s working on, and right now she’s working on figuring out how a sniper could have possibly known where she was going to be, and how she can get her claws on him.

Villa Hermosa, in Catwoman #2, may not be as dark as Gotham, but there is a lot of crime happening there. It takes some organization to set off the explosions around the files being transported, for example. But the skyline is already deep orange – wildfires, or just the sun setting? Either way, not only does this tie in with the plan and give us a setting with a lot of fire in the background with lovely colors and silhouettes, but it gives us that starkest of contrasts – fire and water.

Lovely symbolism for Catwoman and Batman, don’t you think? I also like the water imagery throughout this issue. Anyone might dread drowning, but it feels perhaps more visceral for a Cat. In the scenes when she is in the water, the only red tones we get are from her blood. That continues when the Gentleman Ghost pulls her out. In this iteration he is a ghost, and I love how he’s depicted. His outfit is all white, outlandishly like that of a dandy from a past century, but that’s all we see of him. His face is the empty area above the bow tie, beneath the top hat, behind the monocle. It’s got to be hard to put emotion into a character who has no face, but there is some nice body language and some clear gestures that give his words tone.

I like the way Catwoman #14 is setting up. The heist has a reasonably plausible set up for getting Catwoman involved. The complications escalate rapidly, and we have enough hooks for who else is involved to keep us interested and on our toes.