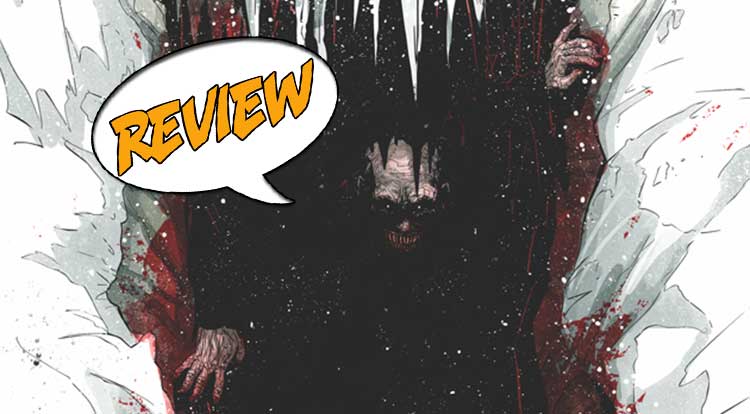 Roman and Sergei stagger on, hoping to reach the village of Magadan and freedom.  With their stock of food low, Nazi patrols thick on the ground, and the endless, snowbound mountains all around them, can these two men reach their goal without turning on one another?  Find out in our Major Spoilers review! Previously in Road of Bones:  facing the fury of the Nazi invasion, Stalin’s USSR still finds time to jail people it regards as subversives for the most petty reasons.  When chef Roman Ivanovich is jailed for making a joke at Stalin’s expense, he’s immediately sentenced to a gulag.  With two others, he escapes, exchanging brutal captivity for the brutal landscape and weather of the Russian wilderness.  Dodging patrols and dogged by hunger, the three men become two when the need for food overwhelms human decency.  Now, can two men survive the elements, and something far darker?

Horror comes in many flavors, and writer Rich Douek provides so many dark tastes to savor in Road of Bones #4.  The seemingly boundless wastes of Russia are horrendously rendered in a stark, inhospitable  white that crushes the spirit.  The minuteness of mankind against the vast geography of a hostile planet is never better rendered.  Then there’s the psychological collapse of the two men, as their sanity begins to crumble, beautifully rendered by artist Alex Cormack who takes great delight in showing us the depths of their misery through the horror in their eyes.  There’s the visceral (literally) survival horror that underpins the entire issue, where three men escaped the gulag, and only two remain, openly talking of devouring their deceased partner.  The thin, bedraggled remnants of these men speak to not only the physical toll of breaking the ultimate taboo, but also the spiritual damage.

Road of Bones #4 is a satisfying conclusion to a series that has been one punishing episode after another.  Stalin’s brutal regime treats all its human components like disposal cogs in a vast, uncaring machine that mimics the universe as a whole.  People didn’t matter to Stalin, as people don’t matter to the universe.  The divine spark you think you have?  The universe, the next snowcapped mountain, the next blizzard, the next dictator – they don’t care a whit for it or you.  And this is what Roman and Sergei have come to understand, even as they stagger their way across the emptiness (moral and physical) of Russia itself.

The artwork in this issue is superb.  As I mentioned before Alex Cormack delightfully brings the physical and mental toll their ordeal has wrought on them to life.  You just have to look at any panel featuring the two main characters to see that Cormack works overtime to bring to life the sheer wretchedness of their predicament in their eyes and the shape of their mouths.  If the eyes are the window of the soul, then taking too long a look into them surely beckons you, the reader, into hell.

Road of Bones #4 of itself could’ve been an excellent short horror story.  There’s no need to know what has happened in the previous issue (aside from one element towards the end).  All you need to know really is contained within its pages, as the horrors and obstacles keep piling up.  By the time we reach the end of the series, with Roman’s mad gleam lighting his face as he staggers into Magadan, you’ll likely feel as exhausted and broken as he is.

Road of Bones #4 is a punishing read.  Set during the Nazi invasion of the USSR, and dealing with the two survivors of an escape from a gulag labor camp, this issue culminates a storyline that has been unrelentingly bleak.

Horror comes in different flavors, and while Road of Bones #4 very much feels like survival horror, there’s a dark thread of Lovecraft’s uncaring, mechanistic universe at play in this issue.  Heroism, self- sacrifice, the will to survive and the ability to tell a funny joke are as nothing when compared to the awesome indifference of reality to two puny men scrambling across the face of a frozen land.  Definitely not to everyone’s taste, Road of Bones #4 is a ghastly fusion of story and art that will linger long in the memory.

An effective horror story in itself, Road of Bones #4 is an exercise in bleakness, the sheer uncaring nature of the universe writ small on two desperate men whose only crime is the will to survive.