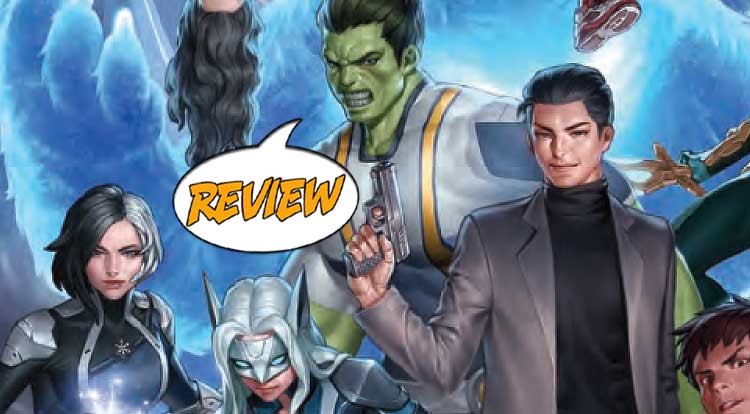 Jimmy Woo is back, and as usual, he’s brought super-powered friends with him!  Your Major Spoilers review of Agents of Atlas #1 awaits! Previously in Agents of Atlas:  The Agents of Atlas defend the cross-Asian portal city of Pan against the science-magic threat of one of Marvel’s classic villains!  Classic science-magic super hero fun combined with young and old heroes from multiple lands clashing with one another, fighting monsters and maybe saving the world along the way!  And who is the Protector of Pan?

Plus:: Where are the original Agents? Namora, M-11, Gorilla Man and Marvel Boy in an all-new top-secret mission!

CONNECTING THE COMMUNITIES OF THE WORLD

Having been accidentally assembled during the War of the Realms by Jimmy Woo, the new Agents of Atlas have continued to operate under the leadership of Amadeus “Brawn” Cho, late of the Champions.  As this issue opens, Branw has assembled his team (Aero, Silk, Crescent, Wave, and Luna Snow, with Shang-Chi and Swordmaster off in New York) and combined their various elemental powers to lure in one of the last of the fire dragons left over from the war with Asgard.  Their triumphant battle is interrupted by The Protector of Pan, a mysterious sword-wielding hero who not only defeats the dragon, but teleports away with its body!  A few days later, Amadeus is stuck by himself in AoA headquarters, annoyed that everyone else is off doing fun and/or adventurous things, while he is stuck working at headquarters.  Of course, that complaint is negated when a beam of light appears outside his window, and his headquarters in Seoul is suddenly connected to Tokyo!  And also Manila, NYC, Mumbai, Jakarta, Madripoor and more, thanks to a man who suddenly appears in a hologram and announces that for the next 24 hours, everyone gets a free trial of his new service, something he calls… Pan!

Oh, and the sky fills with dragons, so there’s that.

I LOVE A BIG TEAM

For my money, you can’t beat a big group of heroes, and this team has the added fun of being a multinational group in the manner of the Blackhawks or All-New All-Different X-Men back in ’75.  This issue also features guest appearances by the new Giant-Man and a follow-up featuring the original Agents (The Uranian, Venus, The 3-D Man, Gorilla Man, Namora and The Human Robot) investigating another dragon sighting, which not only reminds me how much I’ve missed that team, it pulls off the difficult task of making 3-D Man’s costume look AWESOME.  Actually, all the art in this issue is top-notch stuff, making the complicated and textury costumes of the new super-agents like Wave and Luna look great.  The visual depiction of the combined city/cities is likewise kind of breath-taking, and I like the details facial expressions on display during Silk and Brawn’s response to the announcement of Pan.  Greg Pak effortlessly maneuvers his large cast through the issue and around the world, making the reality of a team of this size stationed all around the world that much more interesting, and it’s good to see characters like Shang-Chi still represented in a team that has so many shiny new heroes in it.

BOTTOM LINE: WORTH THE PRICE TAG

In short, the biggest failing of Agents of Atlas #1 is the knowledge that it’s a five-issue miniseries and not an ongoing series, thanks to strong writing, beautiful art, an engaging cast and an intriguing mystery at the heart of the story, earning 4.5 out of 5 stars overall.  Between this comic and ‘The Champions’, the Marvel Universe has never seemed so big or so diverse, and I’m absolutely thrilled with that.