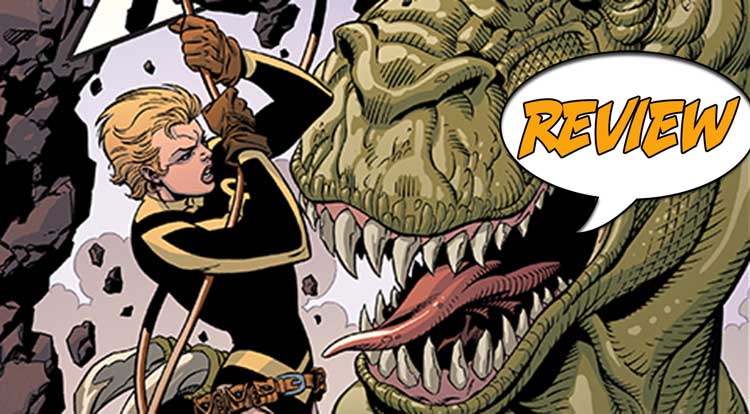 Sam Wildman’s search for Tina Challenger has consumed his life and become an abiding obsession.  Will the risks he takes and the friendships he shatters all be worth it in the end?  Find out in our review of Section Zero #5 from Image Comics. Previously in Section Zero:  Sam Wildman leads a team on a worldwide hunt for cryptids, UFOs and other strange phenomena.  Along the way, he has collected a motley crew, including a scientist with a cursed bag of tricks, an alien, a fish-man named Sargasso, and a teenage boy whose trick is turning into the Human Fly.  But motivating Sam is his hunt for Tina Challenger, his equal in daring and knowledge of the bizarre.  Now that she’s missing, Sam is desperate to find her.

ALL THE FUN OF THE CIRCUS

Section Zero #5 has all the crazy fun of the 70s science fiction shows that features lost families stumbling across weird phenomena, while trying to make it home.  Think Land of the Lost, or even Gilligan’s Island for the sort of wackado vibe I’m talking about.  It’s crazy, it’s fun, it doesn’t make a whole lot of sense, but you’re guaranteed value for your $3.99

Let’s start with the positives.  The artwork and coloring in Section Zero #5 is top notch.  The character design is distinctive (it helps a great deal that the cast is one of the most diverse racially and gender-wise you’re likely to see in a comic today) and well realized.  I particularly liked the work on Sargasso, the cryptid fish man, whose all fins and scales and bulging muscles, with some lovely coloring that brings the character to life.  Panels are filled with action and detail, especially in the first flashback story, which takes place to the Green Swamp in North Carolina.  Trees and grass and trailing fog all come to life under the artwork of Karl Kesel and Tom Grummett.  It’s hard to pinpoint why, but there’s a definite 90s feel to the artwork and layout, which suits the series as it was originally spawned around that era.

So, the artwork is really quite good and well worth your money.  I’m a little less sure about the storytelling.  There’s a lot of fun to be had with the early interactions of the characters.  Sam Wildman is a larger than life character who struts through every seen he’s in.  There’s a family friendly vibe to it all, with a grizzled older male character playing the grandfather, and the young teenager to bring in the kids, interspersed with the naively funny alien and the serious female character, Ms Chen.

It then goes sideways when Wildman is willing to trick and old friend, Caldelas, into using his damaging psychometry powers to locate the missing Tina Challenger.  Section Zero #5 goes from being a bit of a fun frolic to betrayal, leaving Caldelas writhing on the ground with blood leaking from his eyes.  The tonal shift is extremely hard and feels strongly at odds with the tone of the issue to that point.

I’m not going to criticize the writers – it’s their book and how they approach it is up to them.  But perhaps there was a more smoother way to introduce this element?  From that point on, things get darker still, as an encounter in the swamp with a huge, mobile Venus Flytrap goes horribly awry.  The encounter itself isn’t depicted, just the devastating aftermath, which continues the abrupt darker tone the book takes from the middle section.

I suppose Wildman’s willingness to use his friends to find Tina Challenger makes for an interesting character trait.  But with an issue that has that wide-eyed family friendly feel early on, to change so abruptly may put some readers, especially younger ones, a little off.

All that said, the writers are happy to shift the story in Section Zero #5 forward in increments, from 2002 to 2017 and then 2018, with another scene later in the issue that wrong foots the reader in an entertaining way.  It’s clear they’re laying the groundwork for further stories down the line.  There’s certainly enough here to keep me coming back to see what happens next.

Section Zero #5 has the feel and tone, at least initially, of all those 70s shows that looked at the odd and the weird.  Kolchak, Six Million Dollar Man, Land of the Lost – all filled with kid friendly tropes that entertain and spook just a little.  The introduction of more adult themes is somewhat jarring, and through your reviewer off kilter for the remainder of the book.  All that said, it is well written, and the artwork is excellent.

Cryptid mania and a desperate search for a lost friend all come together in a fun, if slightly oddly told, story that has appeal for all ages and interests.