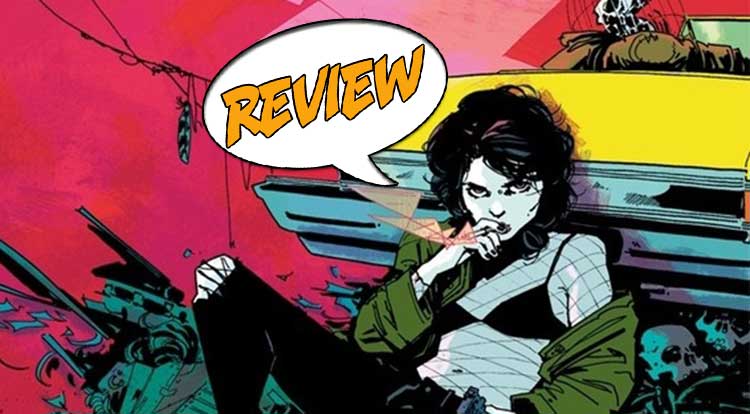 Izzy Tyler wakes up one day to find death coming for her, one way or another. She’s going to tie up loose ends on her own terms in Coffin Bound #1! Previously in Coffin Bound: Izzy Tyburn is marked for death. With an unstoppable killer stalking her relentlessly, she sets out to erase every trace of herself and her life. If the world won’t let her live, she won’t let it have any piece of her.

EACH OF US IS COFFIN BOUND

Is Coffin Bound #1 an adventure story, or an allegory for the inevitability of mortality? Either way, it’s a moody and striking book. It opens out west in a ramshackle house with a yard full of barbed wire and broken female mannequins. Izzy awakens, and someone is there, talking to her – an odd construct which says it’s a vulture. She reads this as a portent, that she’s dying or someone wants her dead.

As if on cue, three men show up and pull guns out of the trunk of their car. As Izzy scrambles for her own gun, they shoot the heck out of her house. She takes a couple of them out, and the last one tells her that the Eartheater has been set upon her. We see him briefly, and he looks terrifying and mythic. I like the concept that he consumes the earth, and by doing so, he learns the things he needs to know, including Izzy’s location.

Izzy burns her house down and drives away with the vulture. She gets a call from her manager who also warns her that the Eartheater has been set upon her. They have a fascinating conversation about surfaces, both such as being out in the world, and also at the individual level, having to deal with dirt and grime, sweat and other bodily secretions. He speaks of being better off without them. And this is the point at which she decided to expunge herself from every place where she has a presence.

Then we cut to a strip club of sorts. A bald dancer entices a man in, dances for him, strips off her clothes and then proceeds to strip off her skin. “A reminder of mortality,” someone calls this, and it is as cathartic as it is shocking. The dancer walks upstairs, where we meet another character, Paulie Starlight, who is a poet. The dancer wraps herself in bandages soaked in some special fluid – she feels no pain with her performance, and she will heal. Then one of the sculpted busts he has flies through the window of his office and breaks upon the floor, and he knows that Izzy is being stalked. This is all very surreal and feels full of symbolism. Paulie rounds up the three men hanging out at his bar and off they go.

Izzy’s car breaks down, and she and the vulture have another philosophical conversation about entropy, about the Eartheater, and about the fact that she is not fleeing him, she is running to other places. She fully understands that death comes to us all.

The Eartheater finds Izzy’s house and the bodies of her would-be assassins. Paulie drives up and confronts him. The Eartheater says he’s not looking for her, but rather her killing tool. Paulie offers him money to cancel the contract on Izzy. In a fascinating twist, the Eartheater reminds him that he hired him. Paulie promptly blames this on the eldritch god Poetry.

There is a lot packed into this story. It feels all of a piece; while some downright strange things happen, they all seem to fit the theme and they feel a part of this world that is at once an extension of our own, and again something entirely supernatural and different.

There are so many strange and gritty things in Coffin Bound #1. Right away from the open, the establishing shot gives us Izzy’s house, placing it in the west with a torn barbed wire fence and the naked female mannequins and mannequin parts set out around it. It looks like junk, but it could be symbolic as well. The interior of the house is similar. There is junk everywhere, empty bottles, half melted candles, skulls and bones, and the heads of dolls.

The vulture, as odd as he is, fits right in. He is humanoid up to a point. His legs are skinny and look mechanical or prosthetic. His arms and hands are hidden in a jacket and gloves. His head is a vulture’s skull with open, empty eye sockets, and he’s wearing a birdcage over his head. It sounds as though it should look ridiculous, but it blends together in a weird way.

This is just where it all starts. The story rolls forward from here, and such care is taken with each subsequent scene, and with each character. This is a book to read more than once, to take time and linger over the art, and see all the details that are there.

Coffin Bound #1, as you might expect from the title, is a serious book with a distinct tone and a lot of style. I feel like I understand what’s going on at the surface, but I think there are deeper undertones here that will be revealed later. I like that Izzy’s path of destruction isn’t something as trite as merely revenge, and the focus on expunging herself from the world before she dies is fascinating.

The bleakness of mortality envisioned in weird road trip of a tale.