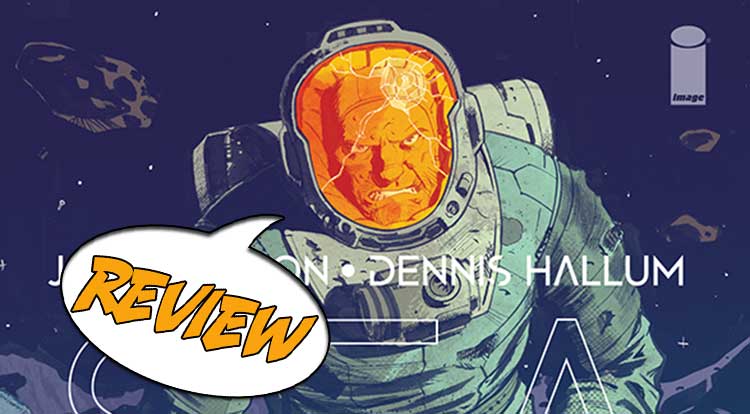 Alone in the vastness of space and running low on oxygen and power, Gil Starx is determined to find his young son. Is this a hopeless cause? Find out in Sea of Stars #2! Previously in Sea of Stars: Gil Starx and his little boy Kadyn are trucking a load of museum cargo across space when a leviathan crosses their path and bites the ship in half. The creature swallows Gil and an explosion knocks Kadyn senseless. When the little boy comes to, he is face to face with a couple of scavengers who discuss eating him. Kadyn’s spacesuit is torn, exposing him to space, but amazingly he is not dead. What looked like an abrupt end is merely a new beginning for him. And his father has just barely survived, and is determined to find him.

THE LEVIATHAN EVENT FROM THE OTHER SIDE

Last time we saw things from Kadyn’s point of view. Sea of Stars #2 opens from Gil’s point of view as he is about to get chomped by the leviathan. Even as he is swallowed, he focuses on getting back to Kadyn. He gets himself thrown up and is responsible for blowing up the enormous creature and chasing it away. When he finally has a chance to look at the wreckage around him, Kadyn is gone.

His focus turns to survival. He fights off some small creatures, and his suit engages emergency life support, putting up a little dome around him as he hunkers down on a rock. He doesn’t have enough oxygen or fuel to get to Kadyn, and he pulls out his virtual maps trying to see what, if anything, he could possibly do.

His mind drifts back to the past when he had a wife. We see him remember a day he made it home for Kadyn’s birthday only to head out on another job almost immediately. But we find out that Kadyn’s mother was very ill with something expensive and not covered by insurance, and the inference is that this is how she eventually died. It’s a little trite, to be frank, but it is consistent with the set up.

Gil finds a nearby spacecraft and sets off, running on fumes, aiming himself to run into it, and he is very lucky, up to a point. He finds his way in and the life support fires up. He plugs in his pack to recharge and starts exploring when he gets attacked by a giant plant and, to add insult to injury, threatened by a small guard drone. If he doesn’t leave immediately, he will be electrified and ejected. In a humorous, if rather dark, confrontation he gets tased and the plant tries to eat him.  Then he accidentally engages the hyperdrive. Gil is not having a good day.

Kadyn continues to swim about exuberantly in space, followed by the two scavengers who haven’t quite figured out why they feel drawn to follow him. As they head off on what Kadyn is confident is an adventure, we pan down to see a new character who also seems to be looking for Kadyn.

Space is not so empty and remote in Sea of Stars #2, although there certainly is a grand sense of scale. I like the balance they’ve made with what Gil’s spacesuit can do even though it’s running low on power. To have him fight small creatures and then have the suit create a tiny domed environment he can do stuff in keeps the story visually interesting. Having limits on the suit keeps the tension up.

I love all the odd alien beings we’ve run across, especially since they aren’t all simply humanoid. The abandoned ship is a case in point. When Gil arrives, we see the plant-like growths running through everything and it seems not unreasonable in an environment that is breathable and has artificial gravity. When the plant manifests a slavering mouth, it’s both dramatic and kind of funny and it’s definitely creative. I get a feeling of a galaxy that is full of a wide variety of things that are yet a mystery to our characters, and that is a delightful feeling to have.

There have been some incredibly lucky coincidences in Sea of Stars #2, but never do we feel that the characters are out of danger. While this space saga is already packed with interesting things, there is an overall sense of vastness and distance. The father’s story and the son’s are both important and compelling.

Kadyn might be a chosen one, but his father will never give up trying to find him.