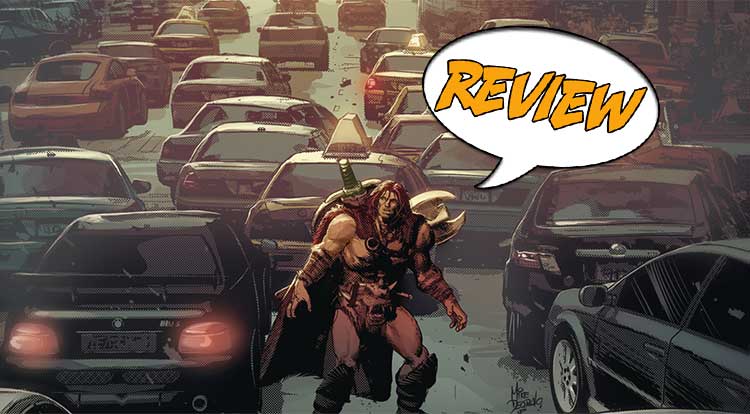 A red-haired warrior strides across the land on a journey home, only to find blood, steel, and death. Before he can process all that has happened, he is thrown into another, distant land; a land ill-equipped to deal with the likes of him. Find out more as Dark Horse Comics releases BERSERKER UNBOUND #1. Previously in BERSERKER UNBOUND: Often we see the tales of the warrior, follow him has he rises through the ranks and becomes a legend. Some stories, however, start not at the beginning, but closer to the end.

THO’ I WALK THIS WORLD ALONE…

The large, muscular warrior walks across the deserted waste and recalls his year. He has been in the Kingdoms of the Mist, battles giants, slain serpents and much more, he can barely remember. He is the Mongrel King, and he is feared through the land. Now he is on a different quest, a quest to return to the land he calls home and his beloved Rhona. She was a worthy love for the Berserker, and together they produced a child, a baby girl. He journeys home to be with them once again, and wonders why he ever left.

In the distance, there is an omen. A pillar of smoke rises from where his village should be. The smell of death rises from the valley, and there is no noise. His village is burning, as soon his whole world will be. The battle is over, his beloved Rhona lies slain and their young, beautiful child sprawled out beside her. But the time to mourn is not now, for the enemies are at his back, and the Mongrel King turns and faces them, sword in hand and shield high. Before his vengeance is gained, he will be sent on a journey to far away, mysterious lands. He will meet new people and see new things which his eyes never should have beheld. He will go far, travel dimensions never imagined, but will his vengeance be satisfied? And what of his self-realization on the battlefield? Will self-knowledge prove to be as deadly as an enemies blade?

GHOSTS OF THE DEAD ARE BESIDE ME…

There is a familiarity to the character and world within this first issue of Berserker Unbound, but do not let that put you off. This is no carbon copy, sword-wielding clone. Veteran writer Jeff Lemire (Sweet Tooth, Animal Man) hits the tone and rhythm of these familiar tropes just right, bringing them a freshness that surprises even the most jaded of readers. Let me put it this way, you know when you hear a heavy metal song and you get the satisfying “chukka-chukka” power chord? It starts to build and build, slowly gaining speed and strength, then the whole band breaks in and you get a crescendo that just feels right and gets you going? No two bands do it quite the same, and Lemire is like one of those heavy metal bands. There are notes he has to hit to get his story across, but he combines them into a flow that brings something new to the reader.  It is satisfying and comforting at the same time. Prior experience tells you the story should go “this way”, but Lemire is not one to stick to the path of the past. I fully expect him to take us on a trip through the unexplored wild lands and bring us out safely, if not a little worn.

Mike Deodato (New Avengers, Old Man Logan) has a raw and visceral style of art that lends itself wonderfully to the tone and intent of this type of story. It is the classic barbarian, the powerful warrior searching for purpose and running from his present, and Deodato conveys that feeling in ways other artists may miss. He has a strong sense of anatomy, and even makes the expanded proportions of the muscle man work within the confines of the world that he presents. The panels are kinetic and the splash pages give the savage satisfaction only this type of comic can deliver. And the splash pages! There are several double page spreads in this title, and they are amazing works of brutal detail. Waves of enemies meeting the berserker’s blade, blood and shadows, carnage on display. There are many comics out there showing graphic violence just for the sake of showing it or for the shock value, but Deodato harnesses that violence and delivers masterpieces of sequential art worthy of the days of old. Colorist Frank Martin *Thunderbolts, East of West) does a marvelous job on providing the graphic and mood inducing color for Deodato’s art. It grounds you in the story. While I love the combination of the two creators, I cannot help but wonder what the raw, uncolored art looks like.

Berserker Unbound may have a few things working against it, but the talent of the crew who are creating it seems to provide sufficient to spin to give you a new slant on its tale of a battle-weary warrior thrown through time. There is a feeling of fantasy in the vein of Howard and Burroughs and the black and white magazines of the seventies. It’s refreshing.

BERSERKER UNBOUND #1 is a sharp excursion into a genre of which not many titles can be found on today’s shelf. Jeff Lemire never really writes a standard story, so I expect a curve to be thrown. Make sure you are in line to catch it.

A sword and sorcery book that looks to draw in a new sort of audience.