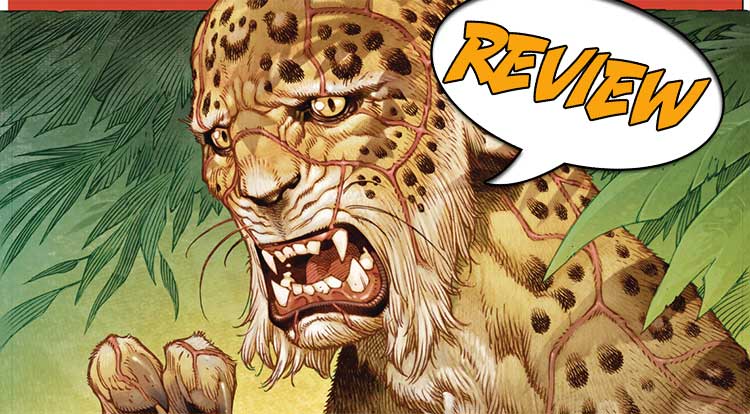 The Island of Dr. Moreau #1 Review

The lone survivor of a shipwreck, biologist Ellie Prendick finds herself on a secluded island under the watchful eye of the scientist Dr. Moreau. When she uncovers the doctor has been conducting experiments of the vilest nature, will she be able to survive to escape THE ISLAND OF DR. MOREAU! The first issue is out August 7 from IDW Publishing. Previously in THE ISLAND OF DR. MOREAU: Originally published in 1896 by the noted science fiction author H.G. Wells, it tells the story a shipwreck survivor, Edward Prendick, who finds himself on the island of a scientist named Dr. Moreau. Moreau was chased from England after his disturbing experiments were uncovered. The story goes on to study themes such as morality, identity, the responsibility of man to nature and more. It has been adapted many times in the Silent, Golden and Modern age of Cinema, adapted for audio plays, comic books, novels and more. Here is a piece of trivia: The 1932 film Island of Lost Souls, which starred Charles Laughton and Bela Lugosi, is a cult classic. H.G. Wells hated it, saying the emphasis on horror overshadowed the philosophical message.

WHAT IS THE LAW?

Nearly a week since the sea vessel The Lady Vain met with catastrophe and sunk beneath the waves, a lifeboat washes up on a desolate island shore. Another Englander, a man named Montgomery, discovers the loan passenger, a young woman named Ellie Prendick. He nurses her back to for over a day before she regains consciousness. As they discuss her situation over food, Ellie hears the yowling of a jungle animal, a puma. After Montgomery leaves, she follows the yowls through the building to find the animal in a cage among a room of specimens. Dr. Moreau discovers her. He tells her that he too is a biologist, as is Montgomery. He also delivers the news that they cannot tell her when she can leave the island, as ships only arrive one or so a year. Before she question him, Montgomery and two men in heavy, concealing clothing come to escort her to her room. For her own protection, she is locked in. She recalls reading of a Dr. Moreau as a child. He was a brilliant man whose work studying abnormal human growths was well known, as were his horrific experimentations. Those experiments caused him to flee from England. Ellie is surprised when, as he delivers her lunch, one of the servants hands are hairy and clawed. When she asks Montgomery on the matter, he deflects, saying the man is an ugly brute. Montgomery goes on to tell Ellie that he has not seen a woman since he left England eleven years ago. Sensing trouble, Ellie excuses herself, saying she needs air. As she walks through the jungle, the horrors she lived through on the sinking of the Lady Vain come back to her, as well as what she did to survive. Those horrors were nothing compared to what she discovers next. In a clearing by a stream, a man beast, derived from a leopard, kneels on all fours, drinking the fresh water. Ellie must decide what she is to do when she uncovers the secrets of Moreau’s island, and the horrors of science it holds.

ARE WE NOT MEN?

Ted Adams and Gabriel Rodrigues bring this latest adaptation of the classic The Island of Dr. Moreau to us and they present us with a well-done piece. As one half of the writing team, , Ted Adams (Diablo House, The Shrinking Man) is the co-founder of IDW Publishing, and has multiple credits under his belt in many aspects of the comic industry. He and Rodrigues chose to adapt this piece after considering multiple other pieces of classic literature. Its status as an early science fiction classic and one of Rodrigues’ favorite novels pushed it up to the forefront.

When adapting a work of literature to the sequential format, there are many decisions to be made, and overall the ones made here work. The most notable decision is the changing of the male protagonist to the female Ellie Prendick. This enabled the team to combine a few plot lines and add some tension to the story. She is not a clone of the male version but a full-grown character with her own journey. There are other things however, which grab your attention, and not always in a good way. Sometimes the dialogue does not flow as well as it could and sometimes it seems as if there should have been more to a conversation. Overall, the writing is well done and the cuts and changes to the original story work well.

Besides having a co-writer credit, Gabriel Rodrigues (Locke & Key, The Great and Secret Show) is also the artist for the series. He has a wonder line, and his attention to detail is extraordinary. While he could have easily made shortcuts in his work, he went in and designed each of the Beast Men to have their own look and style. My personal favorite is the Leopard Man. He utilizes a multi-jointed leg style derived from the actual animal and it gives a subtle level of detail to the creature. It all looks natural, even as it exemplifies the unnatural.

The Island of Doctor Moreau #1 is not a perfect adaptation. There are some proverbial blemishes to be found for sure. The overall look of the book is stunning and it makes you want to immerse yourself. The colors by Nelson Daniel add to the beauty, and make for an overall more enjoyable book. I am curious on how the next issue will go; there are points that can stick to the original book or possibly swerve into the media adaptions and work either way. This first issue makes me want to stick around to find out.

The Island of Dr. Moreau #1

THE ISLAND OF DR. MOREAU is a visually wonderful adaptation of the classic story. Make sure it gets on your summer pull list.