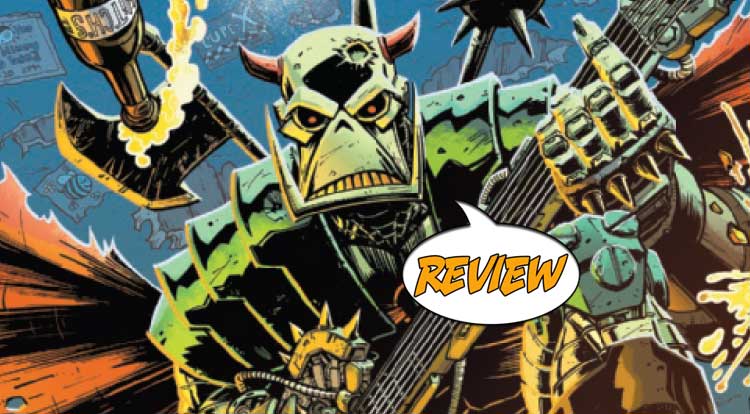 Betrayed by his employer, the intergalactic bounty hunting machine has a score to settle, yes?  Your Major Spoilers review of Death’s Head #1 awaits! Previously in Death’s Head:  When a job goes wrong, intergalactic mech merc Death’s Head wakes up half-assembled at a punk show!  And if the crowd full of deodorant-eschewing youths wasn’t enough, the Young Avengers show up!  Well, half of them anyway.  Hulkling and Wiccan face down the best freelance peacekeeping agent in this universe!

THE ORIGINAL IS BACK!

This issue opens with our mechanical hero in a real pickle: He’s been disassembled and is being used as an amplifier at a punk rock show.  The opening image is a detailed schematic of his body (which looks really amazing, by the way) as his systems come back on-line, leading to a flashback as he reloads his memory from the last save point.  This also serves as the metaphorical record scratch so that we can find out how he got here, and his misery has a name: Yondu.  Having hired Death’s Head as an enforcer, Yondu believes that the merc is holding out on him, explaining that his constant upgrades are costing him too much money before summonning his girl-bot bodyguards to quadruple-team Death’s Head and literally toss him into a dumpster outside.  He then awakens, panicking everyone at the show as he sits up and begins reasssembling his body, but the fleeing revelers get the attention of a couple of heroes in Wiccan and Hulkling of the Young Avengers.  Wiccan is apparently shaken by the appearance of the android, teleporting him away, but it becomes clear that Death’s Head isn’t in another dimension but in their bathroom.  As the android once again wakes up and begins causing chaos, we discover that  Wiccan teleported him because he recognizes him as a friend from a future reality…  and that future version of Death’s Head is hidden under his bed?

AND SO ARE THE YOUNG AVENGERS

I have to admit, I didn’t expect this much Wiccan/Hulkling, but I’m fine with it, especially as it ties into previous appearances of the characters, with Wiccan trying to figure out how to successfully navigate into the future where he, Death’s Head, Hulking and friends are a well-respected team of veteran Avengers.  The use of Yondu (the current timeline version, based on the one from the ‘Guardians of the Galaxy’ movies, not the one with the big frill from the future) entertains me, especially with him in full-on galactic kingping dirtbag mode.  The downside of the story is that, for all its fun characters and entertaining surprises, it feels very fragmented, especially since the transition from space to NYC is easy to miss for readers.  (There’s a teleporter involved.)  On the other hand, it looks fabulous, especially the half-page shot of a reassembled Death’s Head ready to kick butt and find Yondu for a little revenge.  Kei Zama’s art has some very manga/Eastern influences, especially in the faces, but the exaggerated expressions work, as when a horrified Hulkling finds that the dead robot is very much not dead.  The next issue shows the future D.H. (who, thanks to his “haircut”, I shall refer to as Emo Death’s Head) activated, which makes me think there may be an upgrade coming in the rest of this miniseries.

On the one hand, this issue feels a little bit all over the place, with the punk show, the space bounty hunting agency, Wiccan’s self-doubts and a “body” under the bed.  Then again, all of those moments are full of excitement and enthusiasm, and there’s an interesting thread of mystery here about our hero, leading Death’s Head #1 to a better-than-average 3 out of 5 stars overall.  I do want to see more this creative team, especially if it means a return to some sort of spotlight for Wiccan, Hulkling and Death’s Head, so here’s hoping that the next three issues builds into something truly amazing and memorable.

There might be a little too much to introduce in the space allotted, but it's all interesting and fun, good-looking and there's a punk rock show that looks pretty rad.