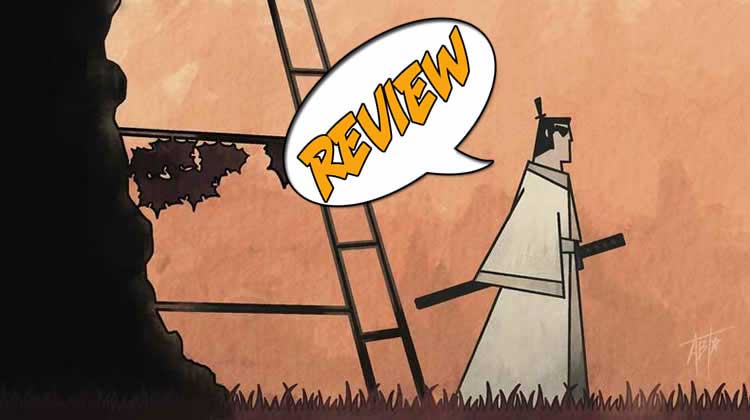 I always wondered why comics weren’t coming out with more adventures with Samurai Jack. After all, he wandered the future for a long time, and I doubted that every challenge he faced was included in the animated series.

Turns out I was right. In Samurai Jack: Lost Worlds, each issue has a complete story with Jack, and the books are very true to the show. SOLICITATION: “Samurai Jack and the Bear Trap!” SNAP! That’s the sound of a bear trap closing on the leg of Samurai Jack. As Jack tries to get free, hunters descend-but is he the only one they’re hunting? A new Samurai Jack adventure in every issue!

As he has tried to get back to the past, Jack has encountered all kinds of strange creatures and technologies, often far more advanced than our own. But what would happen if he ran into something not that advanced but still beyond his comprehension?

That’s what’s going on in this issue of the series. Jack has never seen a bear trap before, so he stumbles into it, only to be caught in its tight jaws.

It’s a trope in the show that Jack runs into anthropomorphized animals as he seeks a way back home. This time, they are often bear-like, hence the trap. But he also finds himself face-to-face with odd beings, and he finds himself in a prison vehicle with a particularly chatty one. Of course, Jack isn’t up for long discussions, so he often cuts off Brig Brooz, as he’s called, in the middle of his discourses. Jack doesn’t have that kind of patience, you see! Brooz is more human than animal, it appears, but he’s in the same vehicle after being caught as well.

Jack and his new-found friends topple over the vehicle, and some manage to escape. However, he has an unexpected encounter with the hunting bears, who want him to sign paperwork excusing them from any liability. Jack doesn’t understand what that is, either. He expresses interest in helping hunt down the others who have gotten away, but they just give him his sword and tell him to stay out of the way.

Then Jack finds out that Brooz isn’t exactly human after all. Nice surprise there, I thought.

Jack’s characterization is consistent with the animated show, with Jack not aware of the advances society has made after his trip forward in time. He’s also very uncomfortable with long conversations, so he sticks to his sword and asking for only that information he needs to resolve what’s in front of him. More than that, he’s not interested in.

One of the lures of Samurai Jack has always been Jack’s being the “fish out of water,” a stranger in a strange land. Another thing that appeals is his ability to bring bad situations to a quick resolution. You don’t get many stories like that in today’s comics!

When you do a comic based on any TV show or movie, it’s important to get the faces right. This artwork does that very well. The coloring and backgrounds are also very reminiscent of the series, which has a certain mood to it at all times.

The action sequences are quick and would certainly hurt in real life. Also, the facial expressions are clear and understandable, so this art is very appropriate for a book based on that Cartoon Network show.

Even though Samurai Jack came to a satisfying conclusion on the TV, I still miss his adventures. He was the resolution to many problems he would encounter, and he had many supporters in the future after only a few months.

A lot of us feel out of place in today’s world, with technology far beyond what we can control. Jack is a quiet, steady hand in a frantic universe, and he is sorely needed on the Earth from the animated series.

I love the concept of single-issue stories. It hearkens back to the early days of my comics reading, including even Justice League of America stories that had meat on their bones but could still wrap up before the last page of the comic. It’s truly great to read that kind of storytelling again!

If you are a fan of Jack or even have never watched a second of the show or read a previous comic based on it, it won’t take long for you to understand or to get back into this concept. It’s adventure in its purest form, a man versus almost the entire world in order to set things right! And although we probably won’t encounter Aku very often, we also don’t have to come across those dreaded three words that cause terror in the hearts of readers: To be continued. I can almost hear that theme music now.

Samurai Jack is adventure in its purest form, a man versus almost the entire world in order to set things right!