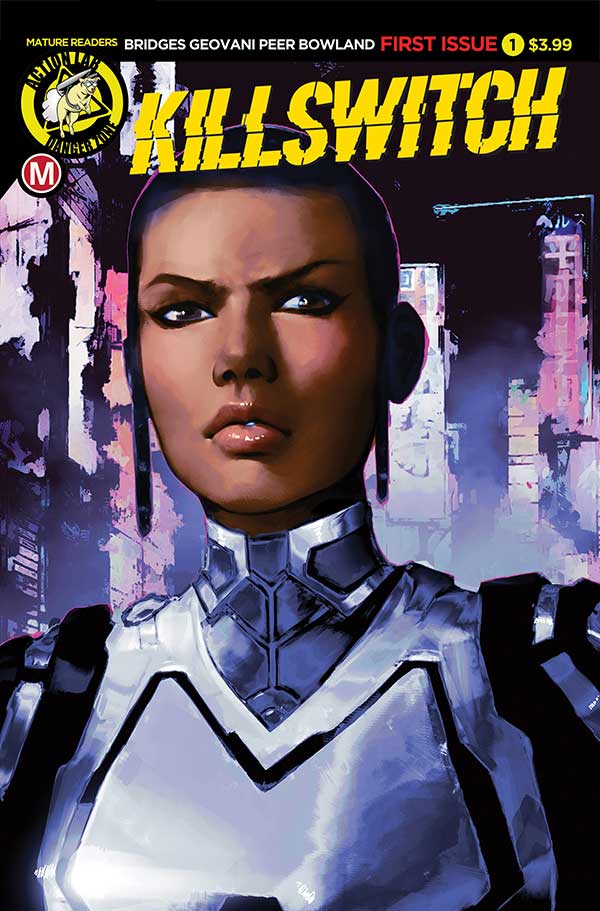 First there was Alien. Then there was Predator. Amalgama’s not quite as lethal as those two… but she’s a whole lot sexier! The latest Danger Doll universe breakout hit series continues here. Don’t miss out!! A wholly original and delightfully twisted deconstruction of the superhero genre by Hollywood screenwriter/Aberrant-scribe Rylend Grant. A disgraced, terminally ill former superhero launches a violent and misguided Death Wish-like campaign to purge the city of supervillains before he dies. His former protégé – currently the public’s point-and-wink superhero ideal – is tasked with bringing him in. The Rub? He isn’t remotely up to it.

As the police swarm the chapel, conflicted bride Emily must make a fateful choice — go through with her wedding, or team up with the Bad Elvis Gang to evade the bonds of holy matrimony. What could possibly go wrong? Unfortunately, playing both sides isn’t as easy as it looks… Chef Nate Willner’s dinosaur hunts in an alternate dimension reignited his passion for cooking and turned his life around. But traveling through time and space for prehistoric meat has consequences he never imagined. He’s damaged the bloodlines of the Saurians – a race of evolved dinosaurs from another universe, fractured the trust of the people he cares for most, and unleashed a flesh-hungry monster on his hometown! With the help of Saurian Detective Gus Horncrasher, Nate and his friends must put aside their differences to save Blackfossil from being devoured, repair the damage to the timelines, and overcome the losses they’ve suffered in their lives.

“A book that’s honest and completely original – a true wild ride that’s unlike anything else. I thoroughly enjoyed VORACIOUS, cover to cover.”
-Michael Moreci, writer of Star Wars Adventures, Wasted Space and We Are Mayhem

Angel finds herself in Rome, Italy, and smack dab at the center of a necromancer conspiracy that will change everything she thought she knew about religion! Also, she discovers that her powers are beginning to manifest in strange and exciting ways. And not only is her power set growing–so are her companions as a new cast of characters also emerge in this thrilling new story arc!