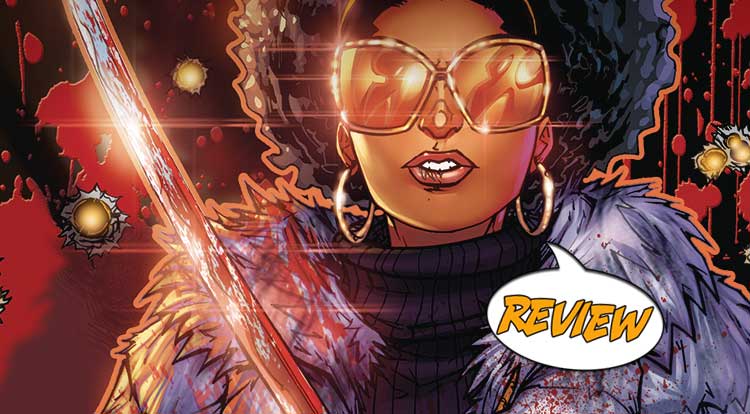 Previously in Killers:  Five deadly assassins are recruited into a game of cat and mouse by the mysterious Jonin!  But what does the Jonin want from them, and what do they gain out of helping him?  Each of these assassins can channel their ki in different ways, granting them incredible abilities!

This issue wastes no time in getting to the action, opening in mid-fight scene, as a white-haired woman who seems to be in her fifties or sixties, desperately tries to stave off three masked men at the same time.  She makes a strong showing, taking out one with a pot of boiling water, kicking another in a fashion that is probably fatal and shooting down a third before she falls.  Some time later, she is found by another woman, one who looks much younger than her fifties or sixties, but is clearly devastated by her loss.  This puts her on the road to revenge, leading her to the official handler of the Ninja Programme, where she is revealed to be the long-thought-dead Ninja-G.  Elsewhere, another assassination attempt goes wrong when the target summons some sort of mystical energy and makes himself immune to blades and bullets alike.  He is revealed to be the equally-supposed-to-be-deceased Ninja-J and both he and G are approached by a young girl with a proposition: Help her find an artifact for their former teacher, the girl’s father, and she will reward them with their heart’s desires.  Ninja-G, Desdemona, tracks Ninja-J, Roger to his home, holding him at katana-point until he agrees to help her…

Then, he punches her out a window to her almost-certain doom!

A LOT OF EXPOSITION, SOME OF IT LESS THAN ELEGANT

There’s a certain level of gritty realism that comes with spy-type stories, even ones that features ki-powered ninjas, and this book is no exception, from the brutal depiction of Desdemona’s dead wife to Roger’s terse assessment that he hasn’t lost his edge, the dialogue is designed to evoke modern, cynical spy stories where eveyrone is corrupt and nobody has any idea whose side anyone is on.  That actually works, tonally, but there are long stretches of this issue that are merely expository dialogue, which is less successful.  The three-page sequence where Ninjas G and K tell each other important things that the reader needs to know feels very stilted and awkward.  It’s even more noticeable because of how smooth the art comes across,  as Dagnino delivers smooth figure work and clear layouts, with some excellent body language and use of facial expression.  The use of inks and deep pools of black help add to the secrets-and-lies atmosphere, making even the shocking final page look pretty amazing.  My biggest complaint with the pacing is that the solicitations seem to say that there are FIVE characters we’re going to see during this story, which leaves me with a concern about pacing and when those others might be introduced.

Those concerns aren’t really germane to the issue at hand, though, which sticks its metaphorical landing more often than not, leaving Killers #1 with a better-than-average 3.5 out of 5 stars overall.  The basic concepts here are interesting, the art is strong, and best of all, both Roger and Desdemona are introduced as layered characters that I’d like to read more about, meaning that I’ll be back for at least the next issue, and probably the entire limited series.   I’m just hoping that there’s a Ninja-A floating around somewhere, if only so that we can all yell “NINJAA!”

Strong art and coloring overcome some issues with pacing and dialogue, and the introduction of the characters is successful in execution, making me want more of our ninja duo.