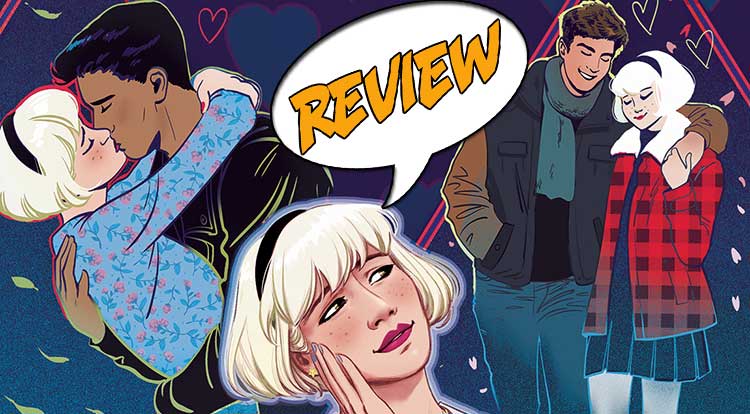 Previously in Sabrina the Teenage Witch: First there was a Wendigo, then a Kraken. Now Sabrina is dragged off into the woods by a huge feathered serpent. With a few clever spells, she gets away long enough to run to the closest people she can find – a trailer park outside of town. Imagine her surprise when she finds out that this is where Radka lives, and her delight when Ren gives her a ride home on his motorbike. He asks her, for his sister’s sake, not to broadcast it about that they live in a trailer – it’s Radka’s sensitive spot. Sabrina arrives home and tells her aunts about this latest monster attack, only to find them distracted. There’s grownup witch council stuff going on, and they can’t tell her about it. And then they walk off into the night.

THINGS ARE COMPLICATED ALL AROUND

Sabrina the Teenage Witch #4 begins the next morning with Hilda and Zelda still gone. Concerned as she is, Sabrina still goes to school. There may be more clues there. On her way, she passes the town hall where several angry citizens demand to see the mayor, and someone throws out the accusation that “those witch women” are at the bottom of the weird things happening.

Sabrina runs into Harvey, who hints that Greendale has a long history with witches. She wants to hear more, but Harvey is already late for practice and his coach is yelling for him.  Turning the story around to its high school romance side, Sabrina confides in Jessa that she just might have a crush on two boys. Jessa is delighted. She doesn’t remember anything of the monster attacks, but loves that her friend has romantic complications. She also comments that Sabrina looks pale, even her hair. Sabrina is a powerful witch, but I love seeing these indications that there are limits and she isn’t perfect at remembering anything.

Sabrina refreshes her hair color spell, only to be overheard by Radka. Then it’s off to chemistry, where the teacher calls her on the carpet, and she gets a weird vibe from him, almost like he has something against her whole family. After school she meets Harvey at the malt shop and asks him to tell her what he knows about witches. First of all, he knows a legend that their town was found by witches and flourished under their hands. Second, he tells her of a woman named Della who lives in a creepy house in the woods. Kids think she’s a witch.  Then Ren shows up. He and Harvey start arguing about Sabrina, and she heads out without either of them.

Sabrina is still worried about her aunts, so she goes home and finds the spell that will reveal magical activity in the area.  It shows her that something huge happened in the woods. She wants to do something; Salem tells her not to be stupid; and she gets the idea to pull together several of the magic items they have and use them to focus her magical powers. I mean, what could possibly go wrong? And what if things go well? And what’s in it for Salem?

Sabrina the Teenage Witch #4 is such an incredibly pretty book. I love it from start to finish. I really love the details of the Spellman house. Sabrina’s breakfast in the first panel is a cereal akin to Lucky Charms, which is so funny and appropriate. But the plants, the pictures on the walls, the interesting hexagonal window in the front door – everything adds character.

The mob of angry citizens is as amusing as it is angry with grumpy caricatures of all sorts of people. The background kids at the high school, even though they’re not vital to the story, capture the flavor of high school life. I think that’s what the art does in this book more than many I’ve read – it breathes a lot of life into practically every panel. It makes Sabrina’s world feel real.

The coloring is vibrant throughout, but especially at the end where Sabrina is dabbling with magic. It’s exciting, with magical runes and sparkles all around, and streaks of color. It makes magic look exciting and beguiling.

BOTTOM LINE: A BEAUTIFUL BLEND OF ROMANCE AND ADVENTURE

Sabrina the Teenage Witch #4 is such a great book. As much as I love seeing how powerful Sabrina can be, I also love that the team takes care to keep her rooted in that awkward high school age where so many things, even small ones, can be so stressful. She’s a nice mix of overconfidence and anxiety, if that makes sense.

After her aunts disappear, and the town is almost ready to call for a modern-day witch hunt, Sabrina shows how resourceful she can be.