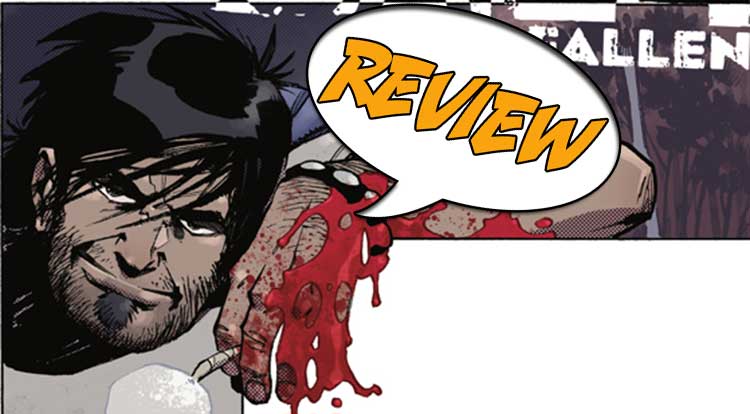 Those LARPers who somehow survived Eric’s rampage in the woods cower, desperate to escape yet trapped in the wilderness.  Will Eric get to enact his wildest revenge fantasies on those innocents who crossed his path? Find out in our Major Spoilers review! Previously in The Cape:  Fallen: A group of friends, including a man who tormented Eric when both were boys, have rented a cabin in the woods to engage in a little live action roleplaying.  When Eric chances upon them, they welcome him into their company.  Gradually, that brief happiness Eric experiences begins to dwindle, and soon his old demons well up until he gives into his homicidal urges and wreaks horror and devastation on all around him.

I suppose as a reviewer you eventually read a comic where after having finished it you put it down, scratch your head thoughtfully, then wish you’d never done so.  For me, The Cape:  Fallen #4 is that book.

I don’t mind the odd revenge fantasy.  I watched the Death Wish movies when I was a kid and escaped (mostly) unscarred.  Blue Ruin, Django Unchained, Kill Bill, Testament (read it, it’s great!) – these are some of the more well-known movies and books I’ve chanced across that deal with the same theme as The Cape: Fallen #4.  None of them have left me with the sense of the utter futility of what the writer was attempting.

What we get here is just more of the same we saw in issue #3.  A deluded man-child unable to cope with the world gets the chance to extract his vengeance on all around him through the agency of a magical cape he found when he was a boy.  Completely innocent people he chances upon in the woods soon find themselves flung from great heights into the surrounding trees, and much impalement ensues.  That’s it.

What is writer Jason Ciaramella attempting to achieve with a book like this?  That extracting revenge in the most heinous ways is something that should be marketed as entertainment?  It’s not as if Eric is struggling against his urges – he’s given in to them fully and actively enjoys setting people on fire and throwing them across the sky.  There’s no depth to Eric, no sense of a great tragedy lurking under the surface.  All we get is a madman with a cape killing people in such an extravagant manner you start to think there’s no point to any of it at all other than to shock the reader.

It might’ve been Dean Koontz who came up with the term ‘shreddies’ – those characters in horror fiction whose only purpose in the plot is to serve as cannon fodder.  Stalked by serial killers, run down by killer cars, tormented by grotesque clowns.  Ciaramella serves up plenty of them in this issue and the story arc overall.  There’s a brief nod at an attempt of redemption for one of Eric’s victims, Rob, who bullied him when they were school kids.  That’s very quickly abandoned for a fireball joke that falls flatter than a pancake.

Instead we’re expected in a sense to feel a modicum of sorrow for Eric, abandoned by his father who went to war and died, and hating his mother.  It’s a little hard to feel anything but hate for a psychopath who has embraced their insanity so totally.  It’s not fun, it’s not entertaining and it’s a little disgusting, to be honest.

The positives, of which there is a couple, center on the art.  Amidst all the carnage, the artwork by Zach Howard, assisted by Conner Herbison and Michael Penick, is far, far better than the script deserves.  The woods come alive under some very intricate pencils and inks, with special mention for the opening scene of a holocaust caused by a falling helicopter.  The character design is spot on and while one can’t love seeing people killed in appalling ways, the artwork for those scenes does the horror of what happens justice.

I’m sure there are a great many readers who enjoyed The Cape: Fallen #4 and are looking forward to reading it.  I respect that, it’s just this issue wasn’t for me.  Perhaps reading the entire series in collected form would ameliorate some of my visceral dislike of this single issue, when seen in overall context.  But apart from the stellar art and coloring, the story itself is what turned me off so much.  If you liked it, that’s fantastic.