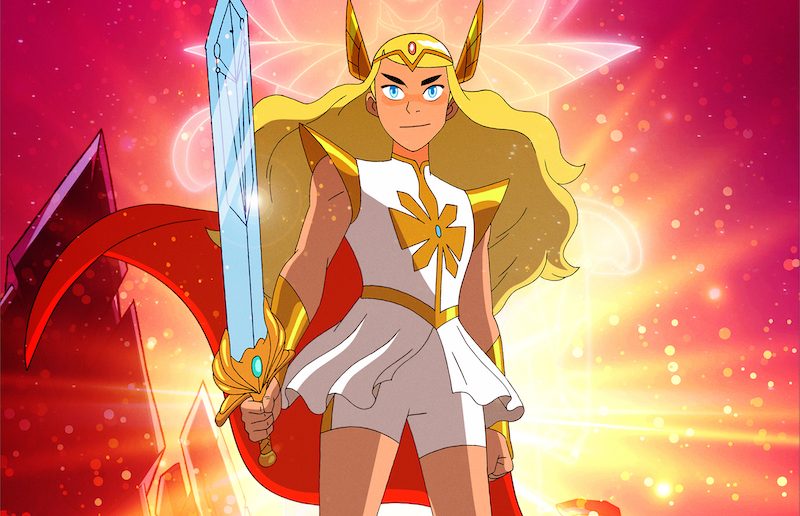 Not only did Netflix bring back She-Ra from a legacy of obscurity and reinvent her for a new generation after the same fashion they breathed new life into Voltron, but the show garnered such popularity that a second and a third season was announced. In a press release earlier this week She-Ra announced an impressive actor joining the show in season three: Geena Davis!

Looks like the Best Friend Squad isn’t in Etheria anymore. Take a journey through the Crimson Waste with Huntara as your guide in the all new season of She-Ra and the Princesses of Power comes to Netflix August 2nd! SUBSCRIBE: http://bit.ly/NetflixKidsFamilyYouTubeSubscribe About Netflix Kids & Family: Welcome to the official Netflix Kids & Family channel!

Davis joins the cast a “Huntara” a tough fighter and leader of the Crimson Waste helping Adora, Glimmer, and Bow on this season’s quest. Adora’s discoveries from her past are taking center stage in this season of She-Ra.

With Davis’ guest appearance the door seems open for more amazing voice actors to join the cast in future.

It was announced yesterday in Variety that Warner Bros’ upcoming HBO Max streaming service had garnered exclusive streaming rights to several audience favourite shows including a big one for Spoilerites everywhere: Doctor Who!

Well … almost all of Doctor Who. All eleven contemporary post-reboot seasons of Doctor Who will be streaming on HBO Max, with no official announcement made about whether or not access to “classic Who” will come with the streaming platform or remain with a giant of the streaming industry: Amazon Prime.

It’s a smart move for HBO Max. HBO itself hosts a number of genre-favourite shows (Game of Thrones, Westworld), and several DC shows will be wrapped up with the CW and DC Universe offerings the platform is sure to absorb (Young Justice, Krypton, The Flash). Adding Doctor Who could be enough to sway some to forking over the subscription fee.

In addition to Doctor Who, HBO Max announced that they have also acquired: The Office (in the wake of Twitter’s meltdown over the news it was leaving Netflix this is also a substantial get), Luther, and The Honourable Woman along with Friends and Fresh Prince of Bel-Air.

Previous to this announcement I wasn’t certain HBO Max could enter the streaming game as a significant player, but when I look at the lineup all laid out like that it is in no way insignificant.

As a social experiment, I would love for Spoilerites to sound off in the comments section or on Twitter about which (if any), of HBO Max’s content has convinced you to sign up for yet another streaming television service.