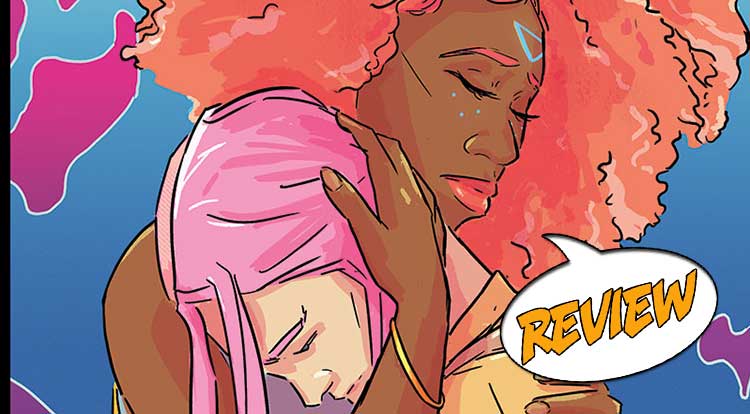 She Said Destroy #3 is lovely in its execution and asks some fascinating questions about religion along the way.

Brigid is poised to take over Fey and the last followers of The Morrigan, and Winona slips through her grasp, but at what cost? Find out in She Said Destroy #3 Previously in She Said Destroy: On her mission to find and wipe out The Morrigan, the goddess Brigid (on the side of the good) tortures one of her followers, and finally kills her. Brigid’s scouts send word that they think they have found Fey, and the Sun Goddess orders them to take a full force in to get all The Morrigan’s people. As the attack starts, Winona has a vision of a conversation between Brigid and The Morrigan. In the name of survival and power, Brigid has given herself over to Christianity. Winona makes it back to her community in time to stave off some of Brigid’s soldiers as The Morrigan’s people buckle in, preparing for the final battle.

THE BATTLE FOR HOME

As She Said Destroy #3 opens, The Morrigan remembers Brigid’s recent attack on Titan colony, from which many of her people fled. Those who remained died rather than convert. Aboard her ship, Brigid is ruthlessly focused on taking all The Morrigan’s followers away so that she is forgotten. Her Light Knights are in position, but a magical barrier holds them back. Brigid sends down Vrixton as her commander to lead and inspire the troops.

Winona and Raul return, and Iris asks her whether she saw The Morrigan. Finding out that she had a vison, she insists that Winona come to the divination circle. At this, Winona and Raul suspect that she was setting them up to fight in the hopes of manipulating Winona to seek out The Morrigan and get a vision. Iris wants some kind of firm word or vision to show her what to do; she doesn’t listen to the message, “Destroy,” and neither is she made content by the vague and mysterious vision Winona sees.

Light Knights perish at the barrier before Vrixton arrives. Brigid gives her the power to break through the barrier, and then retreats, as she is vulnerable there. The Light Knights rush in. Raul feels he must fight them. Winona trusts the crow she sees, which leads her out and away. Vrixton stops the Light Knights from their killing – this mission was supposed to be a conversion, not a slaughter. Meanwhile, Winona is drawn away from the city, away from the fighting, and toward The Morrigan herself.

I like the take on the goddesses in She Said Destroy #3. There’s an interesting blend of flavor between religious, quasi-Christian imagery and the clean lines of futuristic technology. Brigid is a person of color, and her red, natural hair spreads out from her head like imagery of the sun. Her body language is so still and calm, but in her face and eyes you can see her ruthlessness. The ship her forces are on is a mix as well – the clean lines and interesting structure of a starship, but with a huge, crystalline effigy of Brigid herself. Is it more in the lines of a religious statue, or is it the ultimate in narcissism?

I am fascinated by Vrixton’s arc in this issue. She’s high up in Brigid’s command, essentially the chosen of the goddess herself. There is a steadfastness and piety about her as she resolutely goes forth to carry out Brigid’s work, but she almost visibly ages at the sight of death and the ruthless taking of lives which she sees as contrary to their mission.

BOTTOM LINE: SHAPING UP FOR A CONFRONTATION

She Said Destroy #3 is lovely in its execution and asks some fascinating questions about religion along the way. I’m getting a sense that The Morrigan’s people, except for a few like Winona, have been losing their way and are desperate to find it again. Whether they can or not might lie in the final outcome of this battle.