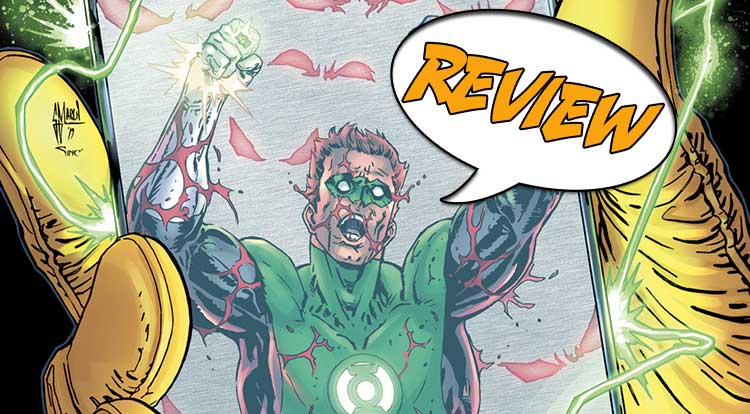 Having been a fan of Morrison’s run on The Green Lantern so far, I was pretty excited to see what he’d do with his first annual issue of the series. And well… Let’s see what DC Comics brings to the table in our review of Green Lantern Annual #1. Solicitation: A Green Lantern tradition is reborn when the annual Jordan family reunion takes a turn for the bizarre, leaving Hal and his nearest and dearest on the front line of a terrifying invasion from an impossible reality that’s closer than you think! There’s only one way for intergalactic lawman Hal “Green Lantern” Jordan to prevent the ultra-crime of the millennium-but what will be the outcome when Green Lantern takes on a young superhero sidekick? And who will it be? Also featuring an incredible guest appearance by the strangest Lantern of all-you must not miss THE GREEN LANTERN ANNUAL!

THE JORDANS VS. ALIENS

Green Lantern Annual #1 kicks off in what appears to be the aftermath of The Jordan Family reunion/wicked bender. Hal rouses himself awake to find the fellow adults of his family passed out, but the children are perfectly fine and waste no time telling and showing Hal that things are not what they seem. The house they are in has been transported to a different landscape and on top of that the children have taken on an alien refugee named Zzyptzz.

The alien belongs to a race that are sentient radio frequencies. This piques Hal’s cousin, also named Hal, interest as he’s been itching to use his own radio based superpowers in a more active way than he has been. The Green Lantern brushes off his cousin’s appeals to be his sidekick, but soon finds himself in need when it’s revealed that the aliens’ intentions are not particularly wholesome. The people of earth, including the now awake Jordan Family, now find themselves being controlled via their (stop me if you’ve heard this before) cellphones. With his young cousin at his side, and a plan that would make Jerry Springer proud, Green Lantern springs into action to save his family and the world.

THE DEFINITION OF SERVICEABLE

One of the hallmarks of a good Green Lantern book for me is always the level of creativity in The Green Lantern’s ring constructs. In that category this issue is just fine. Also, credit should be given to the attention to detail with the children, who actually look like their respective parents. After that though, things fall flat. The design of the radio wave aliens come off as especially bland, the creators opting for a much seen sentient lightning bolt approach (the exception to this being the Green Lantern who makes an appearance at the end).

BOTTOM LINE: WHY ISN’T THIS A REGULAR ISSUE?

I’m a fan of annuals. Particularly because they are often vehicles for big and fun stories that explore a side of a character that doesn’t get seen much in the series proper. Perhaps this is difficult to do with this series due to every issue being a showcase of Morrison’s brand of crazy, but this annual came off as a bit too straightforward and at times, kind of dull. One moment that stands out though came during a discussion between Hal and his superpowered cousin. During this conversation Hal bluntly states that he’s not a superhero but a policeman. Grant Morrison hasn’t hidden this direction for the character, but to see it so bluntly stated was shocking. In the end I have a hard time seeing the justification for this being an “annual” and not just a normal issue.

There’s just not enough here for anyone other than die-hard fans of The Green Lantern. It’s not a bad book by any means, but there’s no shaking the overbearing mediocreness of it all.