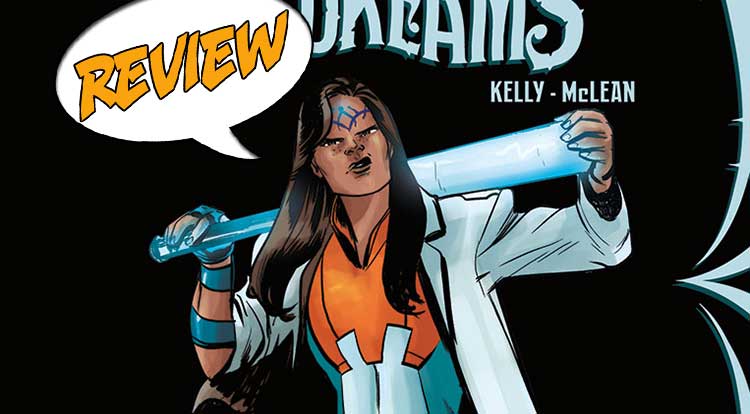 Daher’s decisions bring her face to face with Emerson Chase, and we discover the truth about Daher’s own daughter. Life gets even more complicated in Queen of Bad Dreams #3! Previously in Queen of Bad Dreams: Daher Wei is an Inspector Judge, charged with tracking down figments from people’s dreams who have escaped into the real world. This time, Daher is tracking down a figment on behalf of a wealthy, and powerful, client (Emerson Chase, whose mother is a politician). The figment, Ava, has been learning information about Chase’s mother’s accomplishments, and her money. Daher’s instincts are to protect Ava, but before she can figure out why, they are attacked in Daher’s own home.

WEAVING A COUPLE STORIES TOGETHER

Daher takes Ava to the safest place she knows, which is Viv’s (her ex’s) home, and where Queen of Bad Dreams #3 begins. Immediately there is tension. Viv doesn’t want Daher’s troubles here. But we also meet Selene, their daughter, who is older than I’d thought – about high school age. We also get more of Viv’s exposition to Selene, trying to explain things to her. It’s an interesting narrative device as it gives us a starkly different view of what’s going on than Daher’s own. Daher gets a little time to talk to Selene and the mix of love, distance, and even jealousy rings true. Selene doesn’t want Ava to be her mom’s girlfriend…or her own dream. But Viv is a social worker who helps and advocates for figments. She will give Ava shelter and try to help her.

Daher gets a call from work. She meets her partner, West, and they go to Emerson Chase’s country club. Even in the future, some things are the same, such as clubs like this being the domain of the rich and powerful. Emerson Chase and his girlfriend start off cordially enough, asking if either of the IJ’s play tennis. At this point, the story deftly weaves between the conversation with Chase, and Selene talking to Ava. Daher’s sport of choice was baseball; she could have gone pro but ended up studying psychology instead. And now the significance of Selene wearing a baseball shirt and playing the sport becomes clear.

Emerson patronizingly explains how he likes to know more about the people working for him, and he does this in a way that both egotistical and insulting. He and Daher went to the same university and he insinuates that his family’s money paid for the sports scholarship she presumably got. Selene’s own baseball days were not so auspicious. She was kicked out of a game for fighting with the ump after she was harassed.

Emerson wants to know why the investigation is taking so long. Daher mentions, in front of the fiancée, that she’s looking for a female figment of Emerson’s. And this is when we discover that Selene, Viv and Daher’s daughter, is a figment herself. Emerson knows this, which he blurts out in a tirade that shows how prejudiced he is against figments. Daher punches him.

She, of course, gets called on the carpet by Emerson – and his mother. The Councilwoman gets Daher suspended and pulled off the case, and then wants to talk with her. She talks about her career spent trying to regulate the Annex, which she is definitely not a friend of, and put a stop to the Inspector Judges. She’s also upset that when he had problems with a dream, he came to Daher, not his mother. She hints that Daher could have worked with her to protect her son’s dreams, or her own dreams. But even that is a prelude to the veiled hint that she is really after Ava. No doubt about it, Ms. Chase is a force to be reckoned with.

The art in Queen of Bad Dreams #3 feels off to me in occasional panels throughout the issue. While there is some very nice composition in the family scenes which shows the tension without being over the top, there are times when the angles and foreshortening look a bit off. Characters can look oddly elongated and very flat. The close ups, however, continue to be lovely.

Is it any accident that Ava, Daher, her family, and her partner are all people of color while the Chases are white? That adds an extra dimension to the power struggle which also holds up a dark mirror to our own world.

Viv’s narration to Selene throughout the issue is not distracting in the least. The lettering helps keep the dialogue straight even as it blends between two entirely different scenes, and I love how threads in the conversations and narration tie it all together.

BOTTOM LINE: THE RENEGADE COP OF THE FUTURE