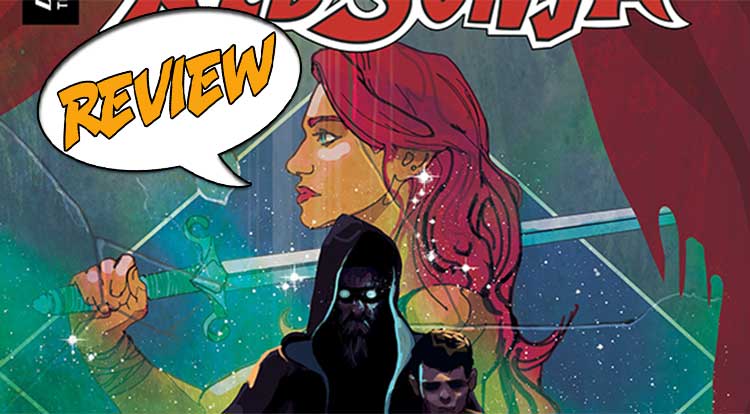 While Sonja and Dragan fight their war, other lives continue. What does the rise of Dragan to ruler of Zamora hold to the fate Dragan’s battles in the present? How did Red Sonja conclude to act as she did, and what comfort could she find in the tale of Cerkus? Let’s find out in the one-shot RED SONJA: LORD OF FOOLS, from Dynamite Comics! Previously in RED SONJA: Red Sonja had left her known lands and travelled to train and serve under the Master of War known as Domo of Khitai. But when Khitai was killed, she left and returned to the land of Hyrlania. It was here that she was proclaimed Queen and had occasion to be the ruler when the ruler of the Zamoran Empire, Dragan the Magnificent, arrived and demanded her surrender. However, as we all know, Red Sonja knows no chill, and such a demand did not go over well. While the events of that conflict were playing out, the past was coming forth, and would have effect on the present and the future beyond.

THE SINS OF THE FATHER WILL BE REVEALED…

Before Dragan arrived on the battlefields of the Hyrkanian conflict, before Red Sonja was declared a Queen, the world continued to turn. Away from the major conflict, lives are still lead. When Dragan left for Hyrkania, he left behind not only his wife, the Empress Phatmos, but his son, Cyril. As theirs was not a union born of love or devotion, Phatmos was not sad to see her power hungry husband depart for war, but his son was. Cyril is devoted to his father, and the sadness to see him go, combined with his anger at a prophecy that required his father to continually expand his empire. Cause him great sadness. After his father leaves, his mother tells him that the Oracon, the priest/prophet who married her off to his father and foretold of his death should the empire ever stop growing, would be staying with them. Angry the prophet had fortold his father’s death, and thereby causing him to be gone so much, the young princeling struck out at the blind man. His mother, ever the peacemaker, comforts him, and tells her son ta tale of the god she serves, the Lord of Fools, lowest of all the gods in the heavens. It is a tale of the Lord of Fools’ interactions with another emperor, one who succeeded in conquering the whole, wide world, and what knowledge of self can do to one so powerful. Young Cyril will discover more than he can imagine, and be forced to make hard, adult decisions about his future and that of the kingdom.

Meanwhile, Red Sonja mulls the decision she has made in regards to the Emperor’s proposal for a cessation to the conflict. She feels responsible for the many deaths around her, but has mixed feelings at the choices she is presented with. When Cerkus, the man known as The Speaker of Truths arrives in her tent to steal some wine, Sonja discovers his origin and how the truth, and the utterance of it, is not always the easiest thing.

MOREOVER, THE TRUTH WILL SET YOU FREE.

As a matter of canon, the two stories which take place in Red Sonja: The Lord of Fools happen before, during and after the events of Red Sonja #6, on shelves now, but they help to flesh out that story presented there wonderfully. Can you enjoy that issue without this one? Yes. Can you possibly enjoy this one-shot without having read the whole of #6? Yes, I believe you could. Mark James Russell (The Flintstones, Prez) has once again succeeded in taking a simple conveyance like a side story and woven it deeply into the heart of the main tale. These two tales, each of which the theme of truth is basic to, are entertaining on their own. When you take them into consideration with the overall story arc presented this fifth volume of Red Sonja from Dynamite, they become like a wine that accents the dinner. You can enjoy it without, but when partaken with it enhances the overall experience. It’s a small movement in the overall symphony that has been the Red Sonja vs Dragan conflict, but it adds a layer. And there are some great moments, the tale the Empress tells her son and the conclusion you can draw then, the realization that the Aesop like story of Cerkus probably affects Red Sonja decision making more than would be obvious. It all ties together nicely to give us diametrical stories fill in holes you never realized where there.

The art duties for the two stories are split between Bob Q. (James Bond:  Origin, The Lone Ranger) and Katie O’Meara ( James Bond: Origin, Crowded), with Dearbhla Kelly (The Wild Storm: Michael Cray, Paradiso) handling the colors for both. Both fit their parts of this issue well and bring out good things. For the flashback panels in the first story, there is a non-traditional frame used around the panels. The colors and art seem to have a different density than the scenes which take place, with the panels themselves disappearing for Phatmos’s story of the Lord of Fools. In second tale, we see how much a good colorist can affect a story. While O’Meara already has a great style, Kelly has the opportunity to change the tone of the colors softening the darks and muting it all to achieve a sense of remembering. When we are in the present, with Cerkus and Sonja in the tent, the solid colors ground us.

While this is an enjoyable one-shot, I wonder why it was left out of the overall story. While the story is complete as presented, these two vignettes add a sense of completeness, and it is almost as if you are watching deleted scenes from a good movie. While it is not vital to the continuing story, it adds so much it would have been a shame not to discover it.

RED SONJA: THE LORD OF FOOLS, is a solid side step from the story Russel is telling in the monthly series, but it is a step which regular readers would be remiss to not uncover.

Delve deeper into the motivations of the main characters, and enjoy this little interlude before the next storyline starts in issue #7.