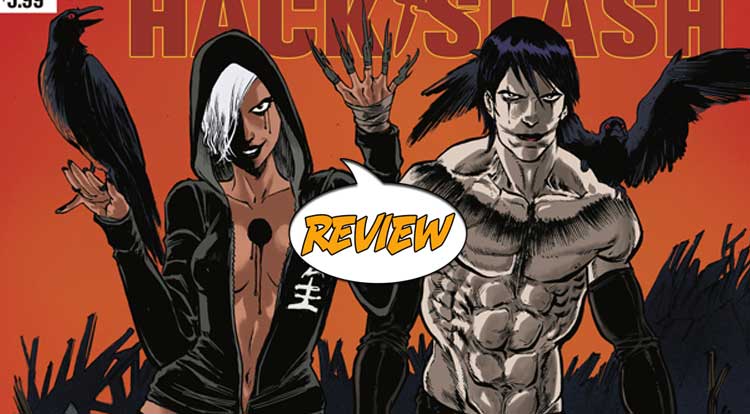 Some say, when someone dies, a crow carries their soul to the land of the dead.  Cassie Hack knows differently…  Your Major Spoilers review of Crow: Hack/Slash #2 awaits! Previously in Crow: Hack/Slash: With Vlad in a coma, Cassie has to side with one of the two Crows to stop the other from getting revenge upon an entire city.  But can the legendary killer of undead killers stomach working side by side with the one thing she hates the most?

We open seconds after the ending of last issue with Cassie on a rooftop , held aloft by the hand of a male Crow (which is to say, a horrifying revenant in face-paint and leather) while her partner Vlad bleeds out on the pavement below. Cassie manages to wound him, only to find that it doesn’t take, and astonishingly, it’s the vengeance-driven Crow who calls a truce. Introducing himself as Marcus Grieves, he explains that the OTHER Crow who hurt Vlad is no friend of his, and in fact he and Cassie share a mission. Together, they get Vlad to a hospital, where Cassie nearly kills a nurse who dares to ask if she’s a relative, while Marcus breaks into the morgue to brood. When the authorities arrive, Cassie throws him into the line of fire, expecting him to heal, and makes a break for it. Marcus takes out the police, but Cassie quickly finds that his wounds don’t heal if he’s not on his mission, leaving her with yet another bleeding friend, while elsewhere, Angeles Cero, the other Crow, furthers her unknown-but-clearly-insidious mission.

The first takeaway from this book is that Cassie looks remarkably like Kristen Stewart in various places in the book. The second is that The Crow looks weird to me in full-color. I really appreciate the art in this issue, which gives the fight sequences a grounded, less-superheroey choreography fitting the characters. Marcus is clearly reminiscent of Brandon Lee in the 1994 film version of ‘The Crow’, while Cassie has always felt like an escapee from a lost Robert Rodriguez movie. The story stalls a little bit in this issue after a dynamic first act, which makes it feel like not a lot happens in these pages, but the effort put into making us feel Cassie’s fear about Vlad and The Crow’s distillation of pure emo is much appreciated. I’m still not sure about Angeles Cero’s plan or the club-like symbolism of her name, nor do I know exactly what our goth team-up is actually working to do, but I enjoy the characters and their dialogue throughout the issue. I might have liked a little more J O’Barr influence in Marcus, but I also understand how hard it is to merge that with a traditional adventure story, so that’s a lesser complaint for me.

BOTTOM LINE: MORE CASSIE THEN CROW, BUT NOT BAD

Given the tongue-in-cheek, almost parodic tone of Hack/Slash and the dark, emotional stuff that I associate with The Crow, this book shouldn’t be as good as it is, but Crow: Hack/Slash #2 pulls off the hard task of balancing both characters, and though the story stalls out a bit, the dialogue and character interaction are well-done and entertaining, leaving us with 3.5 out of 5 stars overall. As with so many modern books, I’m curious to see how this one reads in a collected format and whether the pacing issues will disappear when it’s just part of a larger story rather than a discrete chapter.

Feels less like a crossover than a Crow guest-shot, but they do an admirable job of making things fit. The strong art helps.