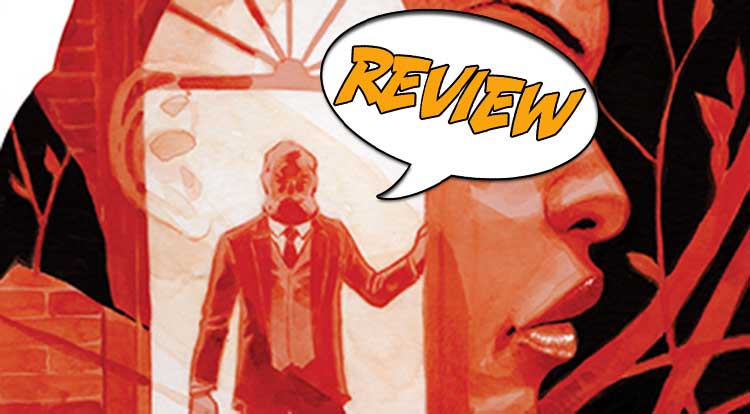 The world of magic may be hidden from the prying eyes of your average citizen, but sometimes it bleeds through. A young sorceress on the run and powerful old man with a legacy to care for meet and that world may never be the same again. Find out more in MANOR BLACK #1 from Dark Horse Comics. Previously in MANOR BLACK: Co-Creators Cullen Bunn and Brian Hurtt collaborate once again to bring you a tale of family, power, murder and death.

On a dark road winding through the woods, a van careens haphazardly through the night. Inside are five people who only wish escape. A ritual must be performed, a ritual which will possibly save one of the young people. The young woman named Ari holds an injured companion in her arms, waiting to be able to perform a ritual. Another companion stress that Ari must perform the ritual now, the totem must be protected. The van lets out a high-pitched squeal as it takes a particularly sharp road, only to find their pursuer illuminated before them. The crash is spectacular, and the van comes to a rest at the bottom of a hill.

Elsewhere, in a grand old building, a manor if you will, and aged yet distinguished looking gentleman contemplated the future. His distraction extends even to his young son, Basil, who is attempting to pack books for his father to take. The old man knows there is much to be done in preparation of coming events and walks to an underground mausoleum. A short distance in, past the bodies interred there, he comes upon a massive hour glass. The hourglass, easily twice height, is mounted to a turning mechanism and overtake much of the room I which it stands. Instead of sand, which is the standard element found in hourglasses, this one seems to have a dark, red liquid dripping slowly through its glass neck. Blood? Only a small amount remains on the upper chamber, the lower chamber having filled to near capacity. Further into the catacombs, the man enters a room which is lit by candles. A small, round table stands, a quartet of corpses seated around it. These are the ones the man has come to see and they discuss matters as if their ghostly corpses and red, shadowy forms were nothing to be surprised at. A successor must be chosen, the apparitions remind him, for time is short.

Back at the sight of the car crash, a deputy stands with a tow-truck driver and contemplates the situation. They have to remove the bodies to allow the tow-truck driver access to the wreck, and that may take a little time. The four bodies in the wrecked van burned hot, and there is no way to identify them. More peculiar is the burn patter around the van, a near perfect circle.

How will these elements come together? Who is the mysterious woman, Ari, and who is she on the run from? What successor is the old man contemplating? Who, and what, were the people in pursuit of the van and what is their goal?

Pick the book up this Wednesday and begin to find out.

THE BLOOD WILL TELL…

From the creative minds who brought you The Sixth Gun, Harrow County, and more blockbuster series come the world of Manor Black. Set atop a history of classic, gothic novels and television shows, Manor Black has a particular feel of the modern and the classic mixed together while retaining their individual identities. Brian Hurtt (Hard Time, The Damned) and Cullen Bunn (Bone Parrish, Harrow County) are a wonderful team and their collaborations are among the most original and unique to be found in the industry. With some teams you can tell where one writer starts and the others end, but this team works together so seamlessly it is near impossible to differentiate one part of the story from the other. There is a wonderfully chilling sense of dread anticipation conveyed with this book, and it makes the whole endeavor something to look forward to.

That said, the art is appropriately dark as well. Tyler Crook (Harrow County, The Dark & The Bloody), uses a clean and organic look for the line art, and then applies, either traditionally or digitally, a very effective watercolor or wash technique for the colors. This style adds to the sense of dread and mystery, while at the same time giving the reader a very solid look in which to immerse themselves as the mystic mystery deepens.

This book is visually stunning, and there is a sense of foreboding in the story worthy of the best gothic novel you can pick up. The sense of the macabre is strong, and I felt as if it was intended in the best tradition of classic gothic novels such a Turn of the Screw and The Strange Case of Dr. Jekyll and Mr. Hyde, and more recent televisions series ala’ American Horror Story, and that perennial yardstick, Dark Shadows. The atmosphere is heavy, and the story mysteriously supernatural. I specifically get a feeling reminiscent of “The Leviathan Cult” storyline from 1969 to 1970 season of Dark Shadows.  I can’t wait to see what is in store for the next issues.

MANOR BLACK #1 is another feather in the cap of the prolific Mr. Bunn and his collaborator Mr. Hurtt, a black, bloody feather.