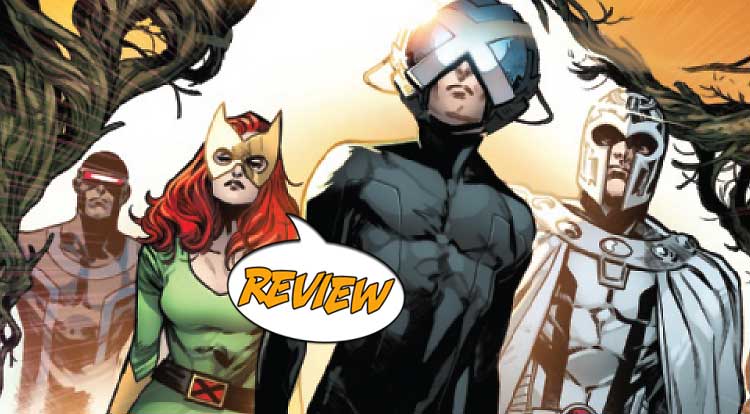 It’s a new day for the X-Men, and you know what that means!  (A new, ugly costume for Cyclops!)  Your Major Spoilers review of House Of X #1 awaits! Previously in House Of X:  Charles Xavier reveals his master plan for mutantkind… one that will bring mutants out of the shadow of mankind and into the light once more.

AN OFFER THE WORLD CANNOT REFUSE

The beginning of this issue is really fascinating, beginning with a literal rebirth (which I’m not sure I understand, to be frank, but I missed the last issue of Uncanny X-Men that, presumably, led here) and following with a time-lapse sequence of the most famous X-Men (or at least, their hands) planeting seeds of Krakoa all over the planet and even on the moon.  Six months later, we see a group of ambassadors arrive in Jerusalem to a building that is somehow also a giant tree made of Krakoa, The Living Island, all ready to meet and make peace with Charles Xavier in return for a number of new miracle drugs that he is offering.  In return, their countries will all recognize his mutant “country” as a legitimate world power.  Elsewhere, a group of Orchis scientists arrive on a special space station built from the head of a Sentinal (probably Master Mold, I suspect) with an explanation that their organization is an alliance of A.I.M., S.H.I.E.L.D., S.T.R.I.K.E., H.A.M.M.E.R., A.R.M.O.R., S.W.O.R.D. Alpha Flight and Hydra (!!), and that they’re enabling Doomsday Protocols based on what Charles Xavier is up to.  The ambassadors meet with the representative of the mutant dream, Magneto, who has not use for their dissembling and lies, and also has telepaths on his side.  Back in New York, The Fantastic Four captures Sabretooth after he, Mystique and The Toad stole some sort of information from the offices of Damage Control, only to find that Cyclops wants to take them all home under a COMPLETE mutant amnesty…

And then, thiings start to get really disturbing.

I REALLY HATE THE MIXED-CASE LETTERING

I’m really torn on the merits of this issue.  On the one hand, the concepts in play are clever and honestly do feel like a major change to the X-books status quo.  On the other hand, it’s A LOT to take in all at once, and the cyclical nature of the Marvel Universe events already has me wondering how long before this is all torn down and replaced.  Heck, the very idea of a sovereign mutant nation that other powers have to acknowledge was used less than two years ago as the basis of “X-Men Red”, featuring some of the same players as this issue.  Aside from Magneto, we don’t spend a lot of time with any one character, which is good,  but there are also dozens of characters in play, from Cypher to Sage to the Stepford Cuckoos to Karima Shapandar, The Omega Sentinel.  There’s a clear intention to knit together many different elements of the Marvel Universe and the X-men into one tapestry (hence the HUGE array of acronyms working together from different stories), which I love, but the effect is overwhelming and a little bit confusing for me as a reader.  One thing that you can’t argue is the success of Pepe Larraz’ art, which does a lot of the heavy lifting in convincing me that this is truly a brave, new world.  The coloring is even more impressive to me, with some really effective lighting effects and a strange, unearthly color scheme for Krakoa and its blossoms.

BOTTOM LINE: NOT SURE WHERE WE’RE GOING, BUT IT’S GOT POTENTIAL

In the worst case scenario, a comic book that looks really, really good but tries to bite off more than it could have is actually not that bad.  There’s nothing here that rings entirely false (though I’m not entirely comfortable with Magneto’s assertion that the humans “have new gods now”), shopworn characters like Wolverine, Magneto and Professor X seem fresh, new and unnverving, and Magneto really steals the show.  In short, House Of X #1 makes for an intriguing start to the X-Men’s new era, and while there are some moments in this issue that feel confusing, the strength of the art and coloring help to make up for those shortfalls, making for a well-deserved 4 out of 5 stars overall.  Marvel has been positioning this as a sea change equal to Morrison’s New X-Men or Giant-Size #1, and while I won’t go quite that far, it is the most sweeping, inventive and most of all effective mutant revamp in years.

Aside from distracting lettering, it's got a lot going for it, but it's a really overwhelming introduction that almost sinks the successes of the visual storytelling.