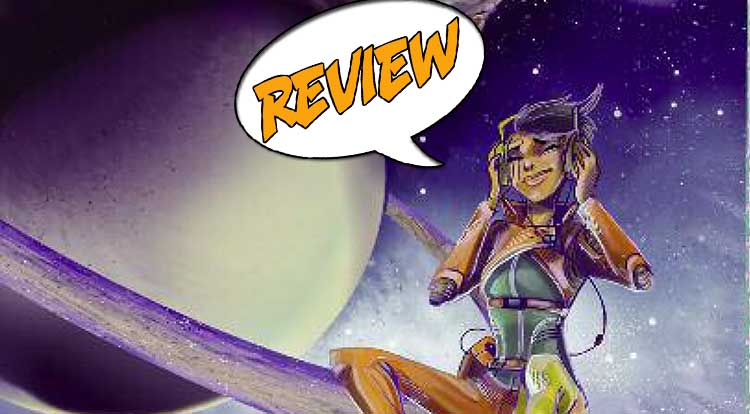 What do tardigrades and the wreckage of a shuttle from Earth have in common? Find out in Star Pig #1! Previously in Star Pig: It is the future, and Earth has mastered space travel. Vess, a teenage girl, is on her way to space camp. Somewhere else in the galaxy, a tardigrade has escaped from a lab and is wandering space, alone and not very capable, but placid and very hard to kill. One day, their paths will cross…

As Star Pig #1 opens, we see that teenagers in the future, on a shuttle to space camp, are still teenagers. The trip is long and boring, and as an adult warns them of upcoming turbulence, Vess is not paying attention, listening to her retro Discman. The turbulence turns out to be an asteroid on a collision course. The oxygen masks deploy. Everyone assumes crash position, and the shuttle is torn in half by the asteroid, scattering bodies and belongings in space.

Something large and pink drifts by and envelops Vess. She regains consciousness and hears a voice talking directly in her mind, a voice who doesn’t know exactly who it is. This is a fascinating opening, and I like introducing the tardigrade as something both helpful and alien, trying to communicate, but not understanding this very different creature. Or even, as it turns out, the concept of death.

As Vess starts freaking out, the tardigrade fills us in. It escaped from a laboratory, where it was being experimented upon, and is trying to get home. It can’t actually vocalize – it can only communicate telepathically. This is so perfect – tardigrades, also called water bears, are strange little creatures with a simple body structure and a bunch of legs. If one were enormous, it still would be limited. But the tardigrade has heard of Earth – artifacts from there are very popular and scavengers will surely come by to collect things. Vess is horrified.

As if on cue, scavengers show up. Vess basically has a panic attack, and the tardigrade remains calm. After all, it can survive in the vacuum of space. Or underwater. Or being completely dehydrated. (They really can.) The philosophical, mildly curious personality is perfect for a creature that seems close to immortal.

They get tractored into the hold of the scavengers’ ship and, to my great delight, the alien scavenger is a spore cloud. I adore aliens that are truly weird and alien. The spore cloud is jovial and speaks in a slangy patois, so different from the precise speech of the tardigrade. It is overjoyed, because the street value of frozen humans and all their stuff, not to mention a tardigrade, is enormous. Then the tardigrade mentions it has a still-living human. It spits Vess out and there is a delightful moment when they’re trying to arrange her on a table and neither of them is capable of fine motor skills.

Vess comes to, face to face with the spore cloud and the tardigrade (now reduced to human size) and she does the only thing anyone would do under these circumstances – freak out momentarily.

I saw the tardigrade on the cover of Star Pig #1 and I had to review it. And indeed, the artist does a wonderful job depicting the tardigrade, but there’s more to the art than that. I really like how the teens look like teens, but also look genuinely futuristic. The style choices in hair, clothing, and face decoration look extrapolated from the present day.

After the crash, we mercifully only get a couple quick glimpses of everyone who is dead – this is not a horror book after all. Still, we see enough to understand. Once Vess comes too, her expressions are wonderful. They mainly hang out on the panic end of the spectrum with moments of calm as she tries to hold it together. I like that she’s freaking out. This is a lot for anyone to take in.

I think it’s an artistic challenge to depict truly alien creatures and figure out how to give them something that we can read as body language, and darned if the team doesn’t pull this off. It helps to take the edge of a frank disaster and impart a little humor and lightness.

BOTTOM LINE: OH MY GOSH THIS IS FUN!