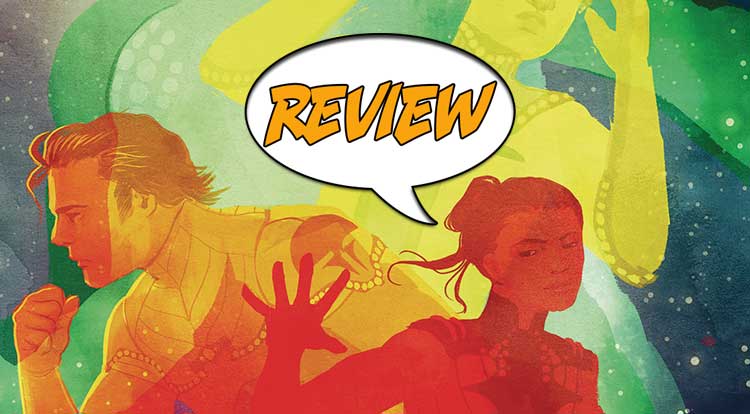 Hazard, Tank, Artisan, and Beacon escape from prison only to find that they are stranded in space orbiting a dying dwarf star. What new adventures await them in Psi-Lords #2? Previously in Psi-Lords: We meet the four main characters, Tank, Beacon, Artisan, and Hazard as they awaken in a futuristic prison, each with a set of strange, new powers. Individually, they hear in their heads the voice of someone calling himself “Scion,” and encouraging them to discover what they can now do. They escape their cells and make their way together to a blood-spattered lab where Scion is. He barely has time to tell them something about finding the holding place of the Psi-Lords before he is killed by the guards. The four of them fight them off, learn that the guards are not human, and realize that they are stranded in space.

As Psi-Lords #2 opens, our four main characters take everything in. They have just learned that they were formerly astronauts together on a ship. But as they find a window to the outside, they realize that they are surrounded by ships all drifting in orbit around a blue dwarf star. They are working together by default, but they are hardly a team yet, arguing about what to do next, when Hazard impatiently leaps through the window into the Gyre, which has a bit of atmosphere, and across to the next ship.

This appears to be a farm habitat, and it is peopled by small, feline-appearing creatures (the Yossari) who have language, but not one that humans can understand until Beacon figures out how to facilitate that. One of the small creatures apologizes to them for not having tribute due to their dying crops and identifies them as Wardens due to the tattoos they each have on their scalps.

I like how we get information little by little, as the characters to, so we try to put their situation together without fully understanding what’s going on. Barely have they had a chance to talk to the creatures when an alien arrives, humanoid but with a tentacled head, and identifies himself as being with a group called the Widowers and informing them that this wreck has been claimed by them. It is from him that they learn that they’re in a sort of spaceship graveyard. The ships have all been drained of power, and they are but one of several peoples who are stuck here. They also learn that there are people with brands – like them and like the Widowers – who have power, and there are people who don’t, like the Yossari, who are victimized.

The Widower realizes the people here have no food for him and he starts killing them. Beacon says they should keep out of it, but Hazard attacks. The rest of the group reluctantly joins her, and it takes all their powers to take on the one Widower, who mocks them for not being able to not being able to use their powers, the powers that all branded Wardens possess.

The Yossari thank them and talk about how their glorious martyrdom will live on in their stories. There are many, many more Widowers, who will come after them. They make their way to their own ship (named the “Octavia Butler”), where they remember little and find out little about who they were and what they were doing here. As Tank argues with Hazard about her getting the into the fight, Beacon senses an intruder in the hold…

The art of Psi-Lords #2 is luminous. It takes a little while to grasp what’s going on at the start. When Hazard leaps out and lands on the farm-ship, it’s hard to tell if that was part of the prison ship they were on, or if it’s a new one. But once we realize that the orbital band containing all the ships has atmosphere enough, everything comes together nicely. The Yossari are vaguely, not completely, cat-like, which allows for some interesting interactions.

I find the Widowers to be distinctly Cthulhoid in their appearance. To me, it seems somewhat jarring that otherwise they’re perfectly humanoid. That’s a personal quirk, as I like to think of the universe as having much more potential variety among beings then different takes on humanoid. That said, the fight with the Widower is terrific. He is brutally efficient, skilled, and calm in battle, which is a stark contrast with the humans who are certainly imaginative, but still quite new in their powers.

BOTTOM LINE: OUT OF THE FRYING PAN, INTO THE FIRE

There is still time to jump into the story with Psi-Lords #2. The group hasn’t coalesced into a team, and the situation they’re in is interesting and rather mysterious. The concept of a joint amnesia allows for a tantalizing trickle of more information which whets our interest, and the suspense is terrific.

With barely time enough to look at their surroundings, our four humans find themselves in the midst of a huge gang battle in the Gyre.