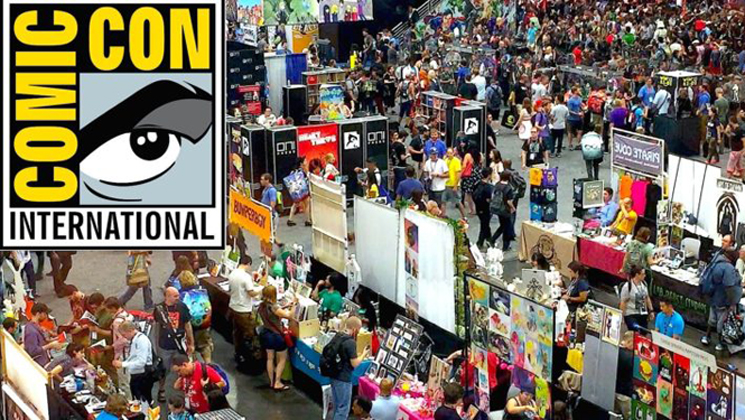 COMICS PORTAL: We Made It Through Another SDCC!

This year’s SDCC has happened, and we’ll be sorting out everything that took place in the months to come! But we can be happy that we made it through the very busy 2019 SDCC!

I have some thoughts about the 50th edition of this con, so here goes!

THE FOCUS CONTINUES TO SHIFT FROM COMICS TO MEDIA Every year, people I know who go to SDCC continue to notice that the con moves more towards media and focuses less on comics. That’s kind of discouraging because it’s called a “Comic Con.” I always say they should change the name to something else that more accurately represents what the event is all about.

One of the prime examples of this was the DC booth, which now was an amalgamation of Warner Bros. and DC. It’s interesting that this happened given that there are a lot of rumors circulating that the DC Universe streaming service might be folded into a WB streaming service to help make the latter more attractive. Could this booth change be the first step in making that happen?

The focus on the booth and their daily reports was also much more on media. Comics weren’t given as much attention. The CW’s shows, animated films, and upcoming movies primarily received the spotlight.

It’s no surprise then that I want to go to Wonder Con instead next year!

In fact, I need to expression my appreciation to SDCC for granting me a press pass again this year. Unfortunately, finances dictated that I couldn’t attend, and I missed it, sadly. It’s the big genre party of the year, after all. The good news is that I’ll be at Galaxycon in Raleigh this weekend, at Dragon Con for the first time, and at NYCC again, which is my favorite!

It’s tough when you can’t be at the party. A friend of mine posted a graphic on Facebook that a lot of the folks I know who couldn’t get there could relate to. You can see it in the upper left in this section.

Something that needs to be noted here is that the cost of attending SDCC increases significantly every year. I mean, even Air BNB rates are getting similar to hotel room costs, so I’m not convinced I’ll be back anytime soon. Sigh.

Also, Game Stop had in their local stores many of the items they were selling at SDCC. Usually, it takes months for that to happen! Guess they decided to strike while the iron was hot, and they made the folks who didn’t get to attend much happier!

IS MARVEL ONCE AGAIN TRYING TO FLOOD THE MARKET?

Back in the 1990s, Marvel duplicated their entire line in an obvious attempt to crush every comics competitor. They almost killed the industry instead! Fans couldn’t afford all that the House of Ideas was making, which caused them to look at other books—good for them!

And yet, here we are again, with Marvel giving just about every character they have his or her own title. I mean, come on! Mary Jane and Doctor Doom each getting their own books AGAIN? New Mutants AGAIN? Especially with the X-Men struggling in sales these days, they need to build the brand up before flooding the local comics shops, in my opinion.

I have a feeling the industry needs to hold on for dear life because Marvel apparently won’t be happy until they are the only notable producer of comics. I understand the importance of competition, but this is completely ridiculous!

So, I’m prepared to give up what few Marvel comics I buy—including Immortal Hulk and Daredevil, but not Friendly Neighborhood Spider-Man—to get out of the way. Ahhh, they’re supposed to change Hulk in the upcoming issue #25, and it’s been getting much less interesting anyway, so I won’t miss them. Someday I’ll write a column about how the House of Ideas keeps revamping the Hulk only to snap him back to who he always has been before very long. Boring!

In about a year or two, if we look back at all the books Marvel announced they will be making at this year’s SDCC, I bet only about one-fourth will still be going. We’ll see! Another example of how SDCC continues to focus on media is the huge number of trailers for movies and TV shows that are released during the con. Every year, some people collect them into one big trailer, and it can take a long time to get through them all.

On the other hand, maybe they’re reflecting younger fans who have left Facebook for Instagram, who prefer to express themselves in videos rather than texts.

I do want to note the news items that I paid attention to, including Burt Ward appearing at some point in the upcoming Batwoman series, Brandon Routh donning the Superman suit again, and Marvel releasing their schedule for their next Phase.

There were a lot of other news items, so you should check out the stories posted here at MajorSpoilers for those!

Suffice it to say that I’m sure it was great to be there, but those of us who didn’t make it can often understand what happened better than the folks walking the floor. A few years back, when I was covering SDCC for a website, I kept reading the news releases on my cell phone as I tried to get through the crowds so I could meet my interview schedule. It wasn’t easy, let me tell you! After a few hours, I realized that the folks on the Internet actually knew more about what was going on than I did, and I was there!

As I said, we’ll likely be decompressing and sorting out the fallout of SDCC for some time to come. The good news is that it won’t take me a couple of weeks to recover, like it did in the past! I’m already home and actually have some money I can spend!

What do you think? What’s your opinion of SDCC and other larger cons? Are they worth the money required to attend? Should the con change its name to something more appropriate, despite the legal ramifications? Whatever your opinions, please be sure to share them in the space below!