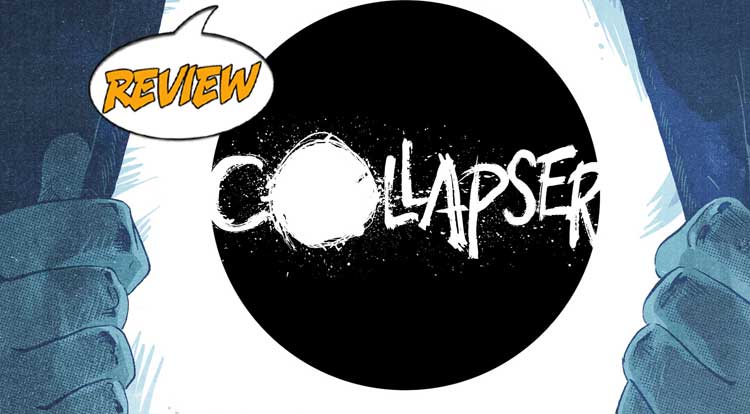 Liam James recieved a black hole in the mail.  Then, life got weird.  Your Major Spoilers review of Collapser #1 awaits! Previously in Collapser: There’s a voice in the head of Liam James questioning everything he does, from his job at the nursing home to keeping his relationship with his girlfriend afloat.  Liam suffers from anxiety, and the only thing that quiets it is music, which makes a weekly DJ gig his one saving grace.  But Liam’s life changes forever when he receives a black hole in the mail (yes, you read that right), one that takes up residence in his chest, grants him insane superpowers, turns him into a celebrity and draws him into a cosmic conflict beyond his wildest imagination.  Where did this black hole come from?  Why Liam?  Is power the cure?  Or will superstardom turn Liam into a black hole himself?

The first image of the first panel of the first page of this book is a very dead body, which sort of sets the tone for everything that comes afterwards. Unseen hands pry something from the body (which is dressed as either a superhero or some sort of space ranger) before we cut to Earth, where Liam James is awakened by the door buzzer of his crummy apartment. He doesn’t realize how strangely alien the delivery man is and, because he’s late for work, immediately discards his package, not recognizing the strange dark streaks starting to soak through the cardboard. Liam’s day job is more than a little humiliating, beginning with being urinated on by an elderly patient and continuing downhill from there, even involving a patient passing away, never allowing him to get in his scheduled chess game. His night-time gig is nearly as bad, as the strange black energies from his “inheritance” cause a power outage that not only sours his DJ gig in front of a scout who might have made him famous, it causes him to lash out at his girlfriend in a possibly relationship-ending way. That’s when things get very dicey, ending with him awakening… at Stonehenge?

I WILL NOT MAKE A “HARDLY KNOW’ER” JOKE

This book has a lot of familiar beats in it for anyone who has read classic Vertigo books, making its arrival in the wake of the Vertigo dissolution seem a little bittersweet to me. There’s a particularly harrowing encounter with a ghost that may or may not be real, as well as aliens coming to steal away his newfound powers, and Liam is a very familiar slacker archetype. I do like the unexpected parts of his character, though, especially as regards his job at the nursing home and the clear regard he has for the patients he serves. Kyriazis’ art is pleasantly reminiscent of John Layman’s work on ‘Chew’ for Image Comics, going from dance club to deep space to weird extradimensional void without missing a beat, and the final page of Liam with his sudden-empowered replica sword standing shocked at the sight of Salisbury Plain is really well-done, setting the tone for all that is to come. I’m not sure if we’re getting a “mundane man becomes galactic protector” or a variation on a chosen one, or even something subversive that shows him incapable of the power he has inherited, but I want to follow Liam on his journey.

BOTTOM LINE: GOT MY ATTENTION

In short, Collapser #1 is a pretty remarkable first issue, immersing the reader in Liam’s life and explaining much of his character with skill and ease, combined with pleasant visuals that evoke classic issues of ‘Sandman’ or ‘The Invisibles’, which is good company to be in, earning 3.5 out of 5 stars overall. This is a really solid first issue, one that has convinced me I should sign on for the full six issue run.